Forget lattes: Starbucks’ next coffee trend might finally be the Clover

Try taking a coffee snob into Starbucks and you might have trouble; that is, unless you’re lucky enough to come across a branch with a Clover machine. The one-cup brewer – borrowing principles from a French Press and a vacuum pot, among other preparation methods, and which allows for far greater experimentation with beans, roasts, and strengths – has slowly found its way into a small number of Starbucks locations, a welcome distraction from big pots of Pike Roast and milk-heavy cappuccino. Even with Starbucks’ might behind it, though, the Clover has been a relative secret among the coffee cognoscenti, but all that could change in short order with signs of a new, super-auto Clover in development.

The original Clover machine was developed by the simply-named startup Coffee Equipment Company, back in 2005. An attempt to mix the flavor profiles of brewed coffee with the one-cup focus usually reserved for espresso-based drinks, it took a new approach to squeezing a mug out of 30-seconds of contact with hot water.

To do that the Clover’s creators came up with Vacuum-Press technology, a combination of French Press and Vacuum Pots. In a French Press, ground coffee is fully immersed in near-boiling water and left to brew, then the grounds separated out by pushing through a fine mesh. With a Vacuum Pot, water heated in a bottom glass globe is forced up into a second globe on top, mixing with ground coffee there. When pulled off the heat, the brewed coffee rushes back down into the bottom half, ready for drinking.

In Clover’s Vacuum-Press, a little of both takes place. On the top of the machine there’s the top of a computer-controlled piston, into which the coffee is loaded; water from a fixed tap above is poured in, and then – after some stirring and brewing time – the piston pushes up, with a 70-micron mesh drawing the grounds up to the top of the machine, while a vacuum sucks the coffee itself out of the bottom, into a waiting container.

There’s something of a spectacle to it, but more importantly it allows for a huge range of coffee flavors to emerge. On the one hand, the whole process is far more controlled than the somewhat haphazard French Press, with the water temperature precisely maintained, more consistency in how the barista can stir the brewing grounds, and more even extraction when the drink is ready. The general report from Clover drinkers is of exceptional clarity, with the delicate complexities of different coffees becoming clearer when made with the machine.

The complexity took on a new dimension in 2008, though, when Starbucks bought the Coffee Equipment Company, and announced plans to put several machines in its stores. It prompted no small amount of consternation among independent coffee shop owners, some of whom had already bought Clover 1S machines (at roughly $8-11k apiece) but who suddenly realized they would be beholden to Starbucks for parts and servicing.

However, a greater question was whether Starbucks’ push for coffee making simplicity could at all be balanced with the demands a Clover put on its accompanying barista. Starbucks had originally used gleaming La Marzocco semi-automatic espresso machines – which required the operator to grind and tamp the beans separately – but, in the early 2000s, switched to super-automatic machines that effectively do everything at a single button press. Known colloquially as bean-to-cup brewers, these are certainly easier to use (no complex staff training on grinders, tracking espresso shots, and the like) but give up flexibility and top quality in the process. For the sake of having consistently average shots of espresso, Starbucks lost the expertise that drew out great shots.

In contrast, a Clover 1S is a lot more time-consuming than hitting a button and watching espresso drip out. Though the extraction takes around 30-40 seconds in all, there’s a fair amount of engagement through the process as a whole: the barista has to decide on the water temperature, how long to stir the grounds (not to mention how aggressively), and when to decant the coffee. The spent grounds have to be squeegeed off the piston mesh into a waste chute between uses. Before all that, there’s helping the customer through the decision process of actually picking beans that might suit the clarity a Clover delivers, then grinding them appropriately. How, critics questioned, would that fit with the fast-paced bar of a downtown Starbucks? 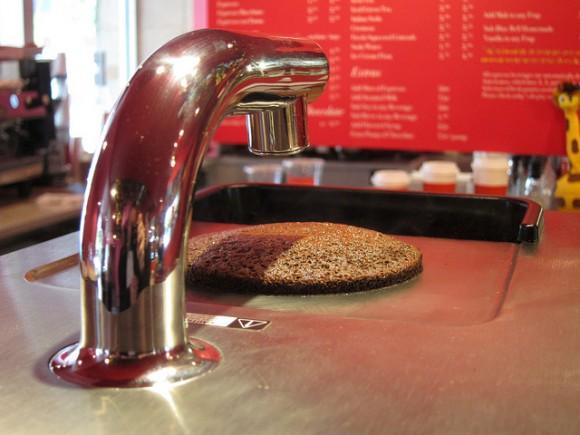 The answer was that it didn’t – or, at least, it hasn’t yet. Starbucks’ exact roll-out of Clover machines hasn’t been numerically detailed, though it’s certainly not many; the greatest number are in the US, of course, while foreign locations are lucky if they get a glimpse of one of the brewers. The UK, for instance, has just one Clover in all of its Starbucks stores.

That may well be about to change, however, with the apparent arrival of a new Clover machine. A freshly-filed US patent application – “Apparatus, systems, and methods for brewing a beverage” – spotted by Spudge seemingly describes a multi-brew-module coffee machine that uses the same principles as the 1S, but with a blast of super-auto convenience. 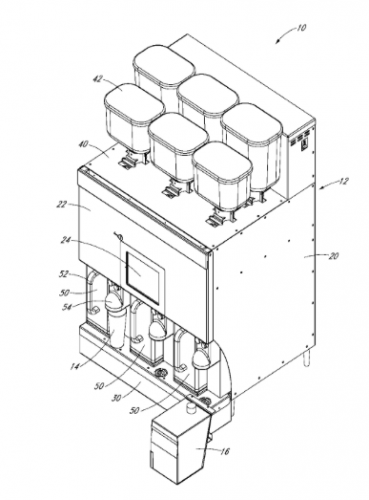 Where the original Clover was one part of an overall coffee making process, the super-auto Clover takes charge of all stages. It automatically grinds the beans, measures out the right dose, brews, and then cleans itself, all in the space of around thirty seconds or less. Starbucks’ engineers have even seen fit to include a little “visual theater” for the customer, with cooling vents that serve the bonus duty of puffing out aesthetically pleasing steam and letting the coffee smell spread around the store.

A cluster of hoppers on the top of the machine would allow for multiple bean options, potentially giving the mass coffee market the same sort breadth of choice that tea drinkers have been enjoying with their individually-wrapped bags for years now.

For Starbucks, it’s an opportunity to translate an interesting but niche acquisition into something far more relevant to the bulk of its stores. The company knows that a big chunk of its North American audience still prefers brewed coffee to espresso-based drinks, and luring them in with the flexibility of an on-demand, by-the-cup brewing process – perhaps with a little extra on the tab, in recognition of how unique an offering it is – could mean a neat chunk of extra business.

It also stands a good chance of being cheaper to run in the long term, too. Right now, Starbucks’ drip machines make coffee in bulk, and that has a relatively short shelf life. The company’s policy is to dump whatever’s left after two hours and brew up a new batch, no matter whether it’s almost all been sold or just a cup’s worth has gone. In contrast, a super-auto Clover could scale to suit, kicking out a theoretical two drinks a minute per module in rush hour, or idling with no waste during lull periods.

Is the coffee connoisseur missing out by the absence of a more involved barista? There’s inevitably something to be lost when you take control out of the hands of trained, enthusiastic people and give it over to repetitive routines; whether Starbucks’ staff will actually have any real clue about the Clover coffees they’re serving, or simply point to well-rehearsed marketing blurbs on a card by the machine, remains to be seen. Then again, if they’re so potentially clueless to begin with, perhaps it’s better in the long run that they have as little input into the making of your drink as possible.

In the end, it’s the coffee in the cup that’s important. That has far more to do with beans than it does machines. Back when the first Clover 1S started showing up in Starbucks locations, the NYTimes sent down Cup of Excellence co-fonder George Howell to taste the various options. Although there were some “interesting” flavors in his opinion, the overall feedback was of too darkly roasted beans (something often done by roasters to make broadly homogenized blends less dependent on the whims of the supply chain, not necessarily because it makes for a stronger cup) that ended up making underwhelming or even unpleasant cups of coffee. Bad input, bad output. Starbucks may well have solved the Clover convenience issue, but it’ll have to match that with great tasting beans if it doesn’t want all that clarity to show it up.