Ford SYNC teams up with Spotify for in-car entertainment

This afternoon the folks from Ford and the SYNC team have just announced that the largest and most successful music streaming service will finally be hitting the roads with us. Here in Barcelona, Spain for Mobile World Congress both Ford and Spotify have confirmed their collaboration to bring Spotify’s over 20 million songs to the Ford SYNC AppLink.

Ford has been leading the charge on getting entertainment inside our vehicles to enjoy tunes on the highway, and today this is one of the biggest announcements for SYNC yet. With many options already available for those using the SYNC AppLink application, Spotify brings the largest library of music and artists front and center to a Ford dash console near you.

Importantly, this is Spotify’s first direct collaboration with an auto manufacturer, instead of third party apps and systems accessing their streaming capabilities. This ensures the most user friendly and seamless experience using the Ford AppLink and Spotify system for your entertainment needs. Users will be able to enjoy Spotify songs and playlists all through simple voice commands. Which means drivers will be keeping their hands on the wheel, and eyes on the road. 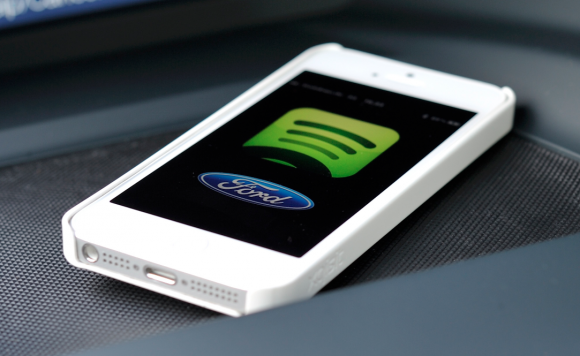 Drivers will be able to use the stock audio controls, as well as steering wheel controls all with Spotify. Top playlists, the music library, similar music, starred songs, recently played music genres and radio stations are all accessible using simple voice commands. Saying commands like “Similar music” will bring up a feed of similar music for instant streaming.

Ford SYNC now works with Spotify, Rhapsody, Slacker Radio, iHeartRadio, Amazon Cloud music, Pandora and more to deliver the most options for those who choose Ford. Alternatively Spotify is now available for our PC’s, mobile phones and tablets, home entertainment, and now our automobiles using Ford SYNC AppLink. Stay tuned for more details and we’ll be searching to deliver some hands-on coverage of SYNC with Spotify.