For more than a few years now Ford has been creating special edition Mustangs to benefit the Experimental Aircraft Association, each with an aviation-inspired design. The carmaker has just teased this year’s model, dubbed the Eagle Squadron Mustang GT, which serves as a tribute to the American fighter pilots who served in Britain’s Royal Air Force during World War II.

The one-of-a-kind Eagle Squadron Mustang GT was designed in collaboration between Ford and RTR, an outfit that customizes Mustangs with aftermarket kits. Under the hood is a 700-horsepower 5.0-liter V8 engine with a Ford Performance supercharger, while the car also features a carbon fiber widebody kit from RTR, and a Tactical Performance suspension upgrade.

Unfortunately the only image so far is the teaser above, which reveals the Mustang’s design inspired by the RAF’s Supermarine Spitfire fighter planes. This includes the dark green camouflage paint, the RAF’s circular symbol on the hood, the white stripe across the tail end, and a dash of yellow on the front and side mirrors. 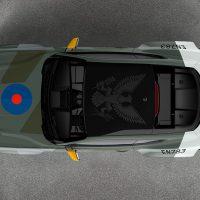 The Eagle Squadron Mustang GT will make its debut on July 12th at the Goodwood Festival of Speed in England — another part of the tribute, as the grounds of the festival were among the areas of Britain defended by American pilots. Afterwards, the vehicle will return to the US for the Experimental Aircraft Association’s Gathering of Eagles charity event in Oshkosh, Wisconsin on July 26th, where it will be auctioned to the highest bidder.