This week Ford has made it clear that they’re pushing forward with the app connection between their vehicles and apps of all kinds, not least of these being Amazon’s Cloud Player. This new integration works with Ford’s SYNC AppLink, here appearing with voice commands so you’ll be able to switch through songs and albums by speaking commands out loud. This release was joined by apps such as Glympse for navigation and point-of-interest locating as well as SINA (weibo.com) for instant updates for microblogging, news, and weather overseas.

With Ford’s AppLink system, apps are able to work in their own unique way with your next-generation Ford vehicle. Today’s Ford Developer Program takes the power that these high-powered and well-known app developers have and lets it go forth in the 3rd party space. Today’s offering of new apps included such gems as the Wall Street Journal, Rhapsody, and USA Today as well, several of them available via AppLink today. 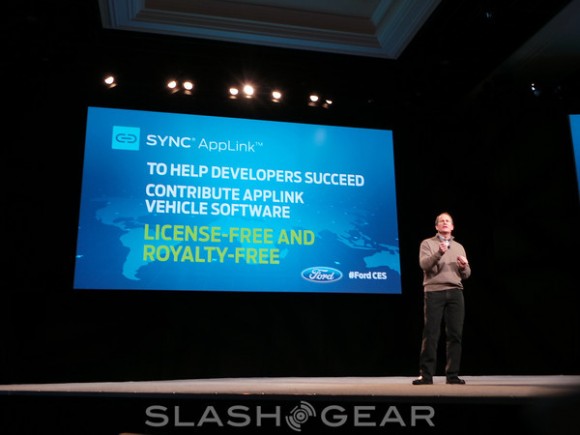 Ford is aiming to show the public here how these apps are changing the way the vehicle is connecting to you, the user. Not just the driver now, the user. At developer.ford.com, developers will begin to take advantage of this space in the very near future, working with vehicles that are out now as well as autos that’ll be out in the near future.

Ford’s connection to the mobile smart device environment changed today – it evolved into an ecosystem. Instead of only working with developers that specifically have the audience that’ll capture everyone’s attention, they’re showing their willingness to open their platform up to the world. This system at its current state allows developers to integrate their apps with Ford vehicles at no cost (save the Developer Kit if they do so choose to pick one up.) Sound like a radical program to you?