For surprise hit Tangerine, iPhone the movie camera of choice

Necessity is the mother of invention, but moviegoers were still astonished to hear that unexpected Sundance 2015 hit Tangerine was filmed entirely on iPhone. The high-energy, sharply comic, but also touching film wasn’t the first to rely on Apple’s smartphone, but with a theatrical release this week it’s perhaps the highest-profile. After an early screening in San Francisco, I sat down with Tangerine’s writer/director Sean Baker and co-screenwriter Chris Bergoch to find out how the iPhone helped shape a movie that at times can be as challenging to watch as it is rewarding.

“We were aiming toward Sundance because Mark [Duplass, executive producer] had a good relationship with them,” Baker told me, “but we had no idea, and to tell you the truth we were just along for the ride, I don’t know how much thinking we did about it.” 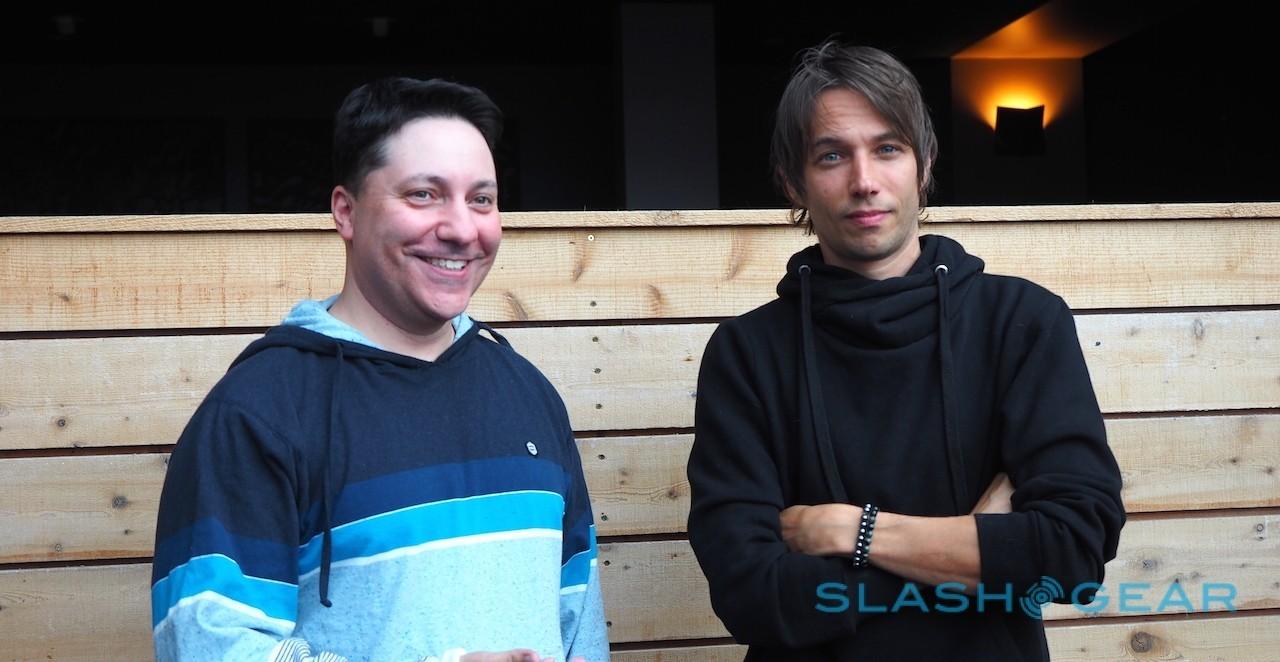 The expectation was that Tangerine’s big talking point would be its portrayal of trans sex workers in Los Angeles, the distinctive sunset hues of the city helping give the movie its name. While that certainly get its share of the attention, though, the revelation in the credits that it was entirely filmed on iPhone proved the talk of Sundance.

“It wasn’t a gimmick, it was just a way to make a movie,” Baker explained to me. “We’re cinephiles, we would’ve shot 35mm if we could’ve.”

Nonetheless, a humble budget forced a minimal kit-bag: predominantly three iPhone 5S handsets. To those, Baker fitted anamorphic lens adapters from Kickstarter success Moondog Labs, which – after post-processing to desquish the footage – delivers 2.40:1 aspect-ratio rather than the iPhone’s usual 16:9. 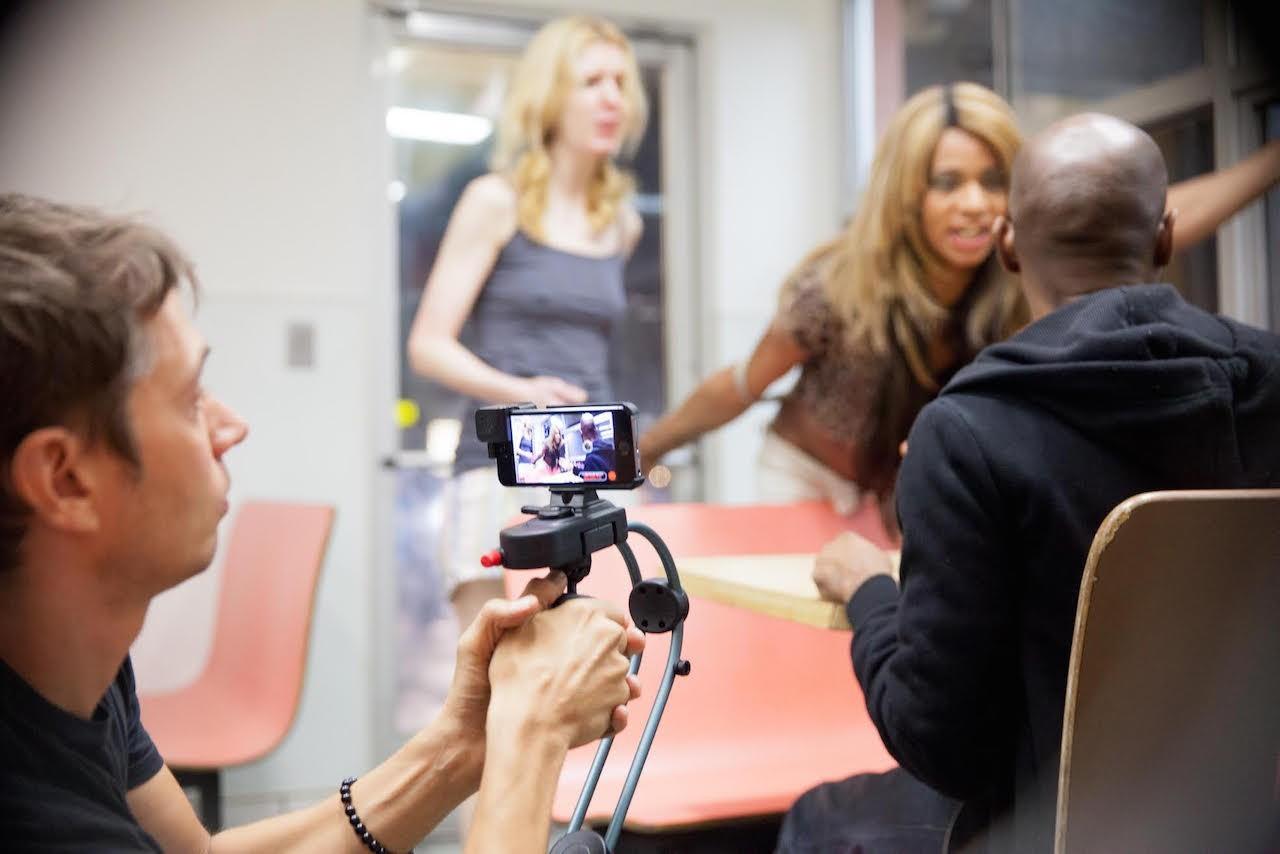 “It was almost a manifesto: embrace every benefit iPhone brings”

With stars Kitana Kiki Rodriguez and Mya Taylor both newcomers to film, not to mention many LA residents standing in as background extras, the iPhones also had an unexpected advantage in how unremarkable they are.

“Looking back, it would’ve been a very different film [with other cameras]. It was almost a manifesto, if we’re going to be shooting with the iPhone we need to embrace every benefit that the iPhone brings with it,” Baker says. “That’s the size, how clandestine you can shoot with it, the fact that first time actors aren’t intimidated, the fact that you can steal some shots if you need to – though we did have permits!” 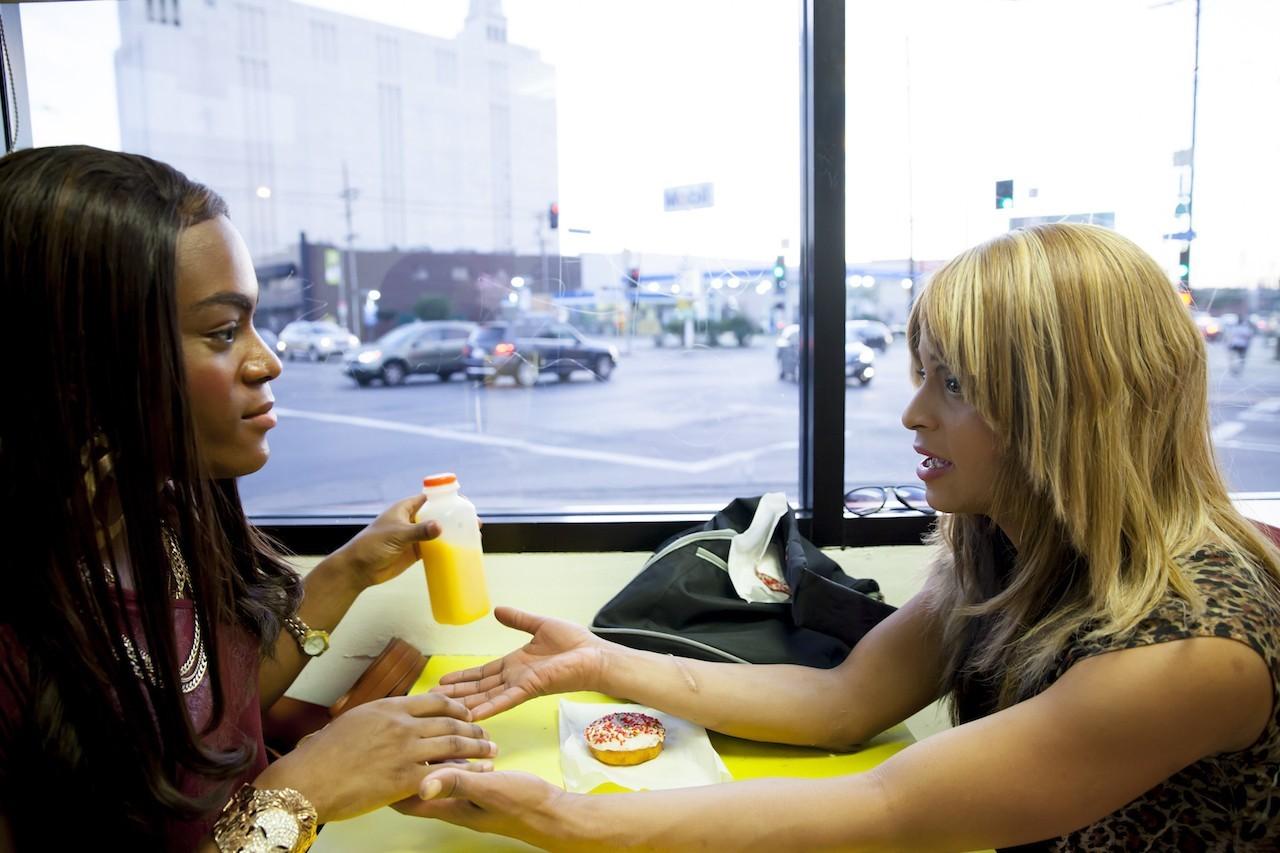 ”If they do see an iPhone,” co-screenwriter Chris Bergoch pointed out, “they just think we’re making something for YouTube.”

“Everyone is used to taking selfies”

“These weren’t performers, or professionals,” Baker adds. “Everyone is used to taking selfies all the time. There’s usually this hump that actors have to get over.”

At times, the lack of budget forced some creative thinking. A regular Steadicam was out of the question, so the team turned to the company’s Smoothee version, specifically intended for smartphones. According to Baker it took around a month to get the feel of the stabilizing accessories, by which point he was flirting with even more unusual ways to capture scenes.

“Some of those tracking shots, they were experiments at first,” the director points out. “I was on a bicycle literally, a ten-speed bike, holding onto the handlebars with my left hand and the Smoothee with my right.” 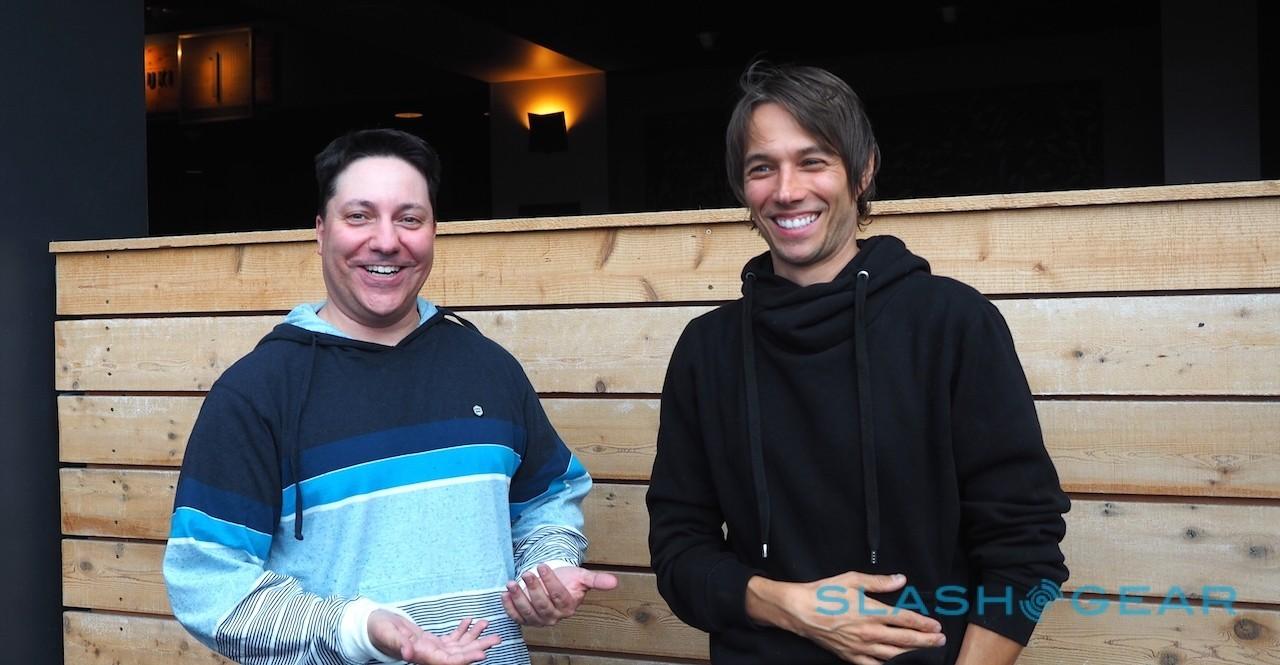 As for the choice to go with iPhone rather than other smartphones on the market at the time, that decision was also cost-related.

“There was the app,” Baker says, “but also we owned iPhones and we were on such a low budget we wouldn’t even have been able to go out and experiment with a [Samsung] Galaxy even if we had the choice.”

“iPhone is the world’s most popular camera,” Apple said when I asked about Tangerine‘s choice of equipment. “We’ve made it easy for our customers to shoot amazing videos with built-in features like HD video recording, slo-mo, time-lapse and cinematic video stabilization. We are continuing to see more and more professionals choose iPhone to bring their visions to life.”

Still, there were some areas where corners couldn’t be cut. “Every day we get the question, “how did you record the sound on the iPhone?”,” Baker laughs, “and we say, we didn’t, we added it in post.” 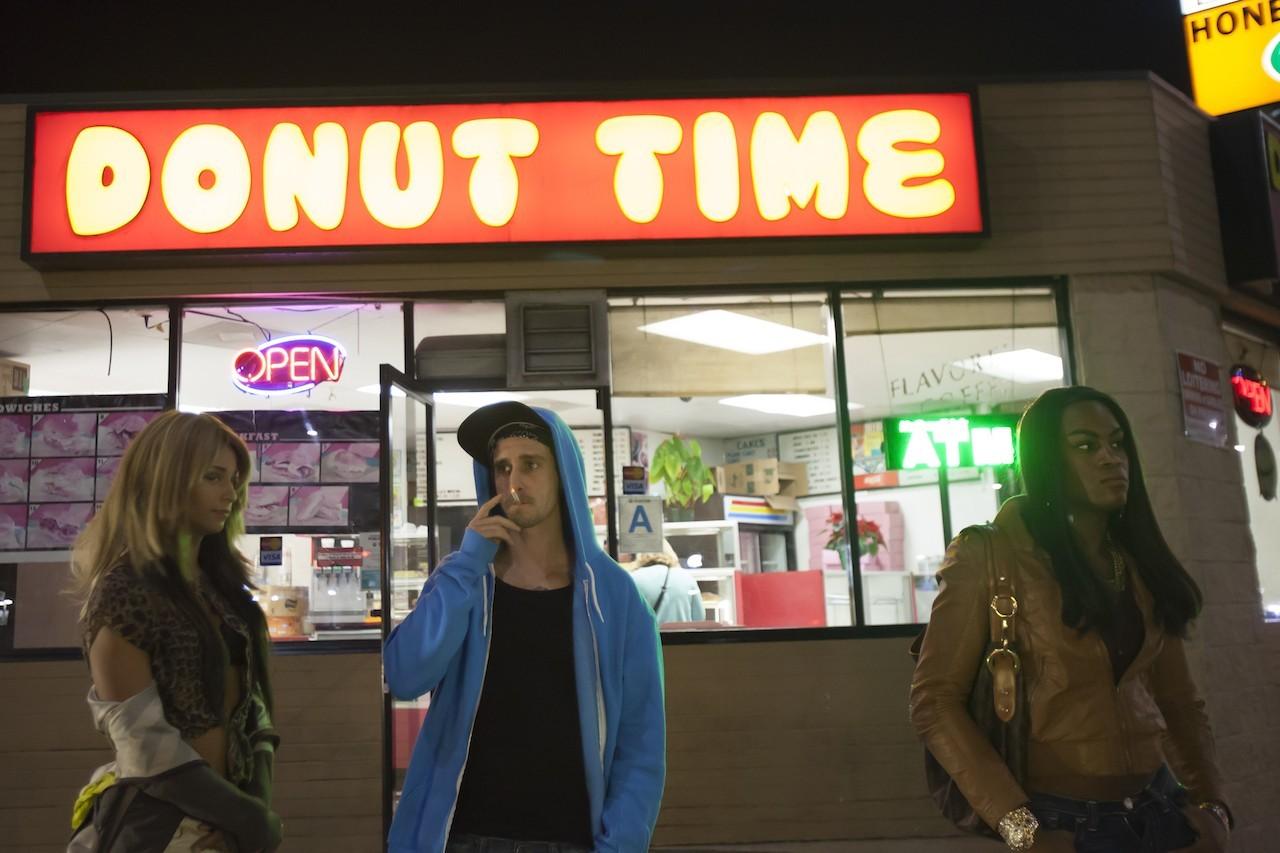 A professional sound recorder and traditional lavalier microphones were used, rather than relying on the iPhone’s own microphone. Even so, the unconventional pairing did cause some problems during recording.

“We weren’t able to monitor,” Baker explains, “so some of those shots where we had the elevated train shots it was put on a pole, and 18ft painter’s pole, so we’d just put it up, do our shot. And then we’d pull it down and look at it, and if we didn’t like our takes we’d have to put it up again.”

The resulting footage, captured over a two month period in late 2013 and early 2014, was all thrown into Final Cut 7 for some heavy post-production treatment. While hyperrealistic movies generally desaturate their colors in order to make them seem more like everyday life, Tangerine cranked up the grain and the saturation to emphasize the otherworldly setting.

The overall feel might be dreamy, but at a time when trans awareness has fixated on Carolyn Jenner and award-winning shows like Transparent, it’s important to remember that not every experience runs the same way. In particular, the stories from trans people of color are seldom heard, though Baker isn’t particularly concerned whether audiences are “ready” for them.

“I don’t really care that much,” he explained. “I know there is an audience for it, and I hope they do discover it and I hope it has an effect on them, hopefully a positive one.” 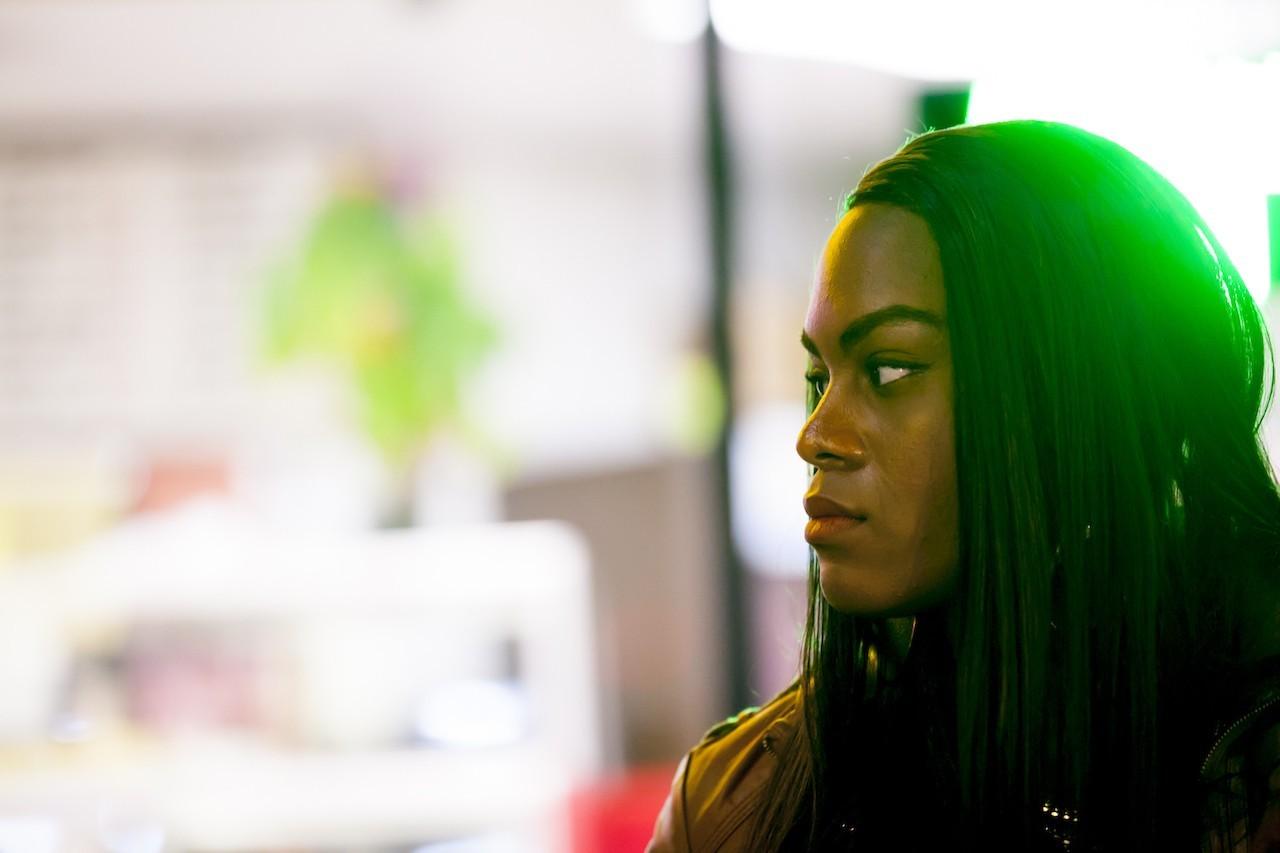 “We did try, when we were sitting down writing out the story, we did try to figure out how to make it accessible to broader audiences,” Bergoch points out. In the intervening period, though, the world has accelerated of its own accord.

“When we set down this road it was two years ago, before [trans issues] became part of the zeitgeist,” Baker observes. “I guess the first and foremost thing I’m happy about is, this is a time the industry will be more open to trans actors. That’s so important to me, these films that I make I don’t want it to just be about me, I want it to be about the people involved.”

Some tickets may well be sold because of the iPhone connection – as Bergoch says, “it’s the tool that tells the story, if that’s the reason that fills the seats, then great” – but I suspect the plot itself will end up being the main topic of discussion when the theater clears.

There’s an engaging immediacy, a virtue of Baker’s rapid cuts, the way the camera is so tightly positioned in the depth of each scene, and the soundtrack of high-energy trap music.

Interwoven are the stories of an Armenian family dealing with the fallout of infidelity, and on a broader stage the ways in which trans issues and gender identity come head to head with ignorance or indifference. 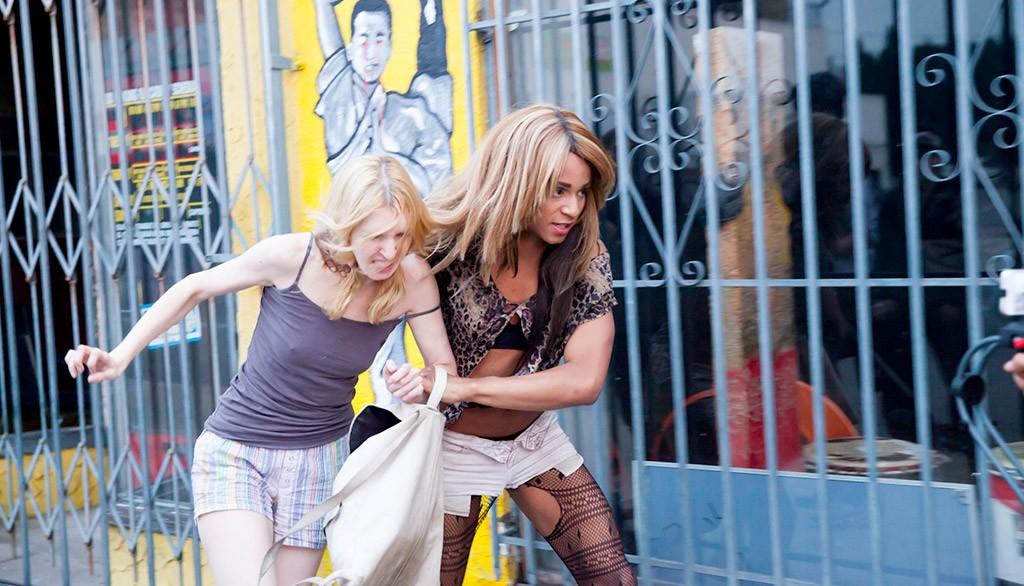 As a mix of subcultures go, Tangerine’s particular recipe is likely to be unfamiliar to most viewers. Even so, while you may never have dragged a fellow sex-worker by her hair through downtown LA and then had a screaming match in a doughnut shop, part of the movie’s charm is how readily you identify with the main characters. We understand friendship, infidelity, and the hope of having a different life, so engagingly and believably portrayed by Rodriguez, Taylor, and the rest of the cast.

As for what comes next, though Baker is still enthusiastic about smartphone filming, he concedes that a change might be required simply to confound expectations.

“I think that I personally have to probably flip it next time,” he joked, “because people will expect me to shoot on the iPhone so I might have to switch it up just for the sake of switching it up.” 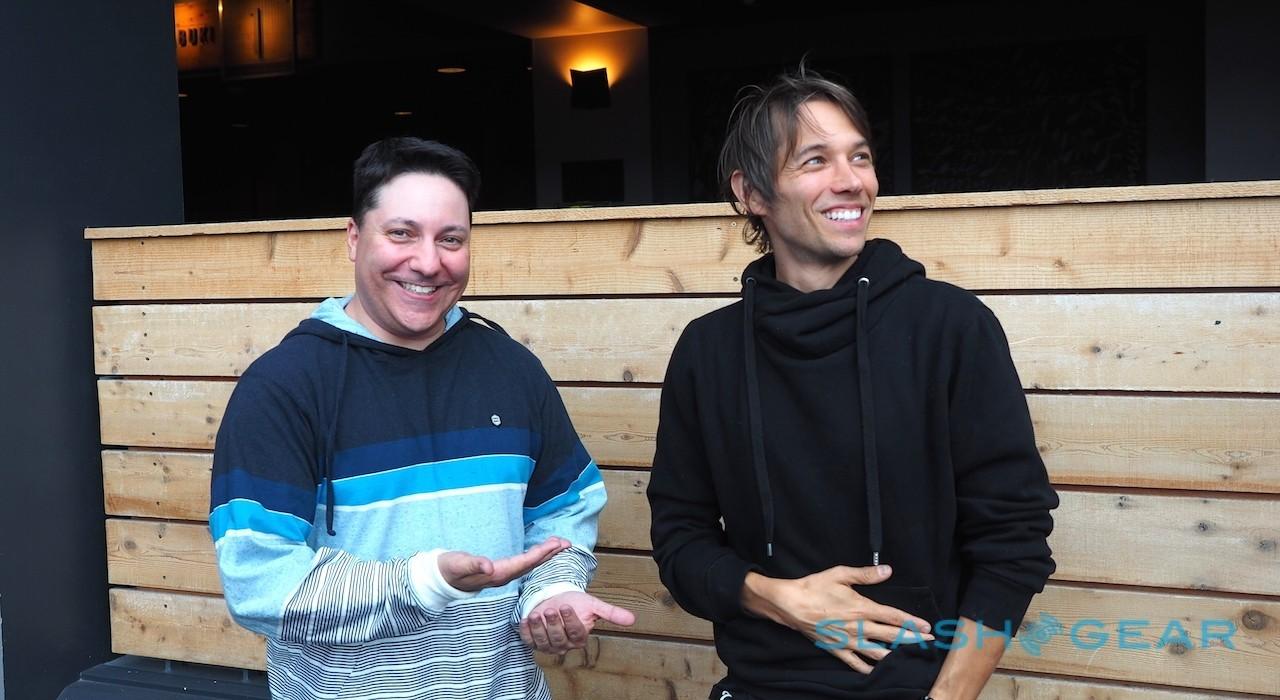 “I would love to maybe produce a film shot on one … to tell you the truth, I’m a very harsh critic, a tough critic on digital cinema. I see it. And when I don’t like, I think, “damn, that could’ve been…” … I think that’s one of the reasons we stayed away from the DSLR, it has too much of a digital look.”

If anything, Bergoch is even more willing to experiment. “If the Apple Watch 2 can let us do it, we’ll do it,” he laughed, “we’ll explore that possibility!”

Tangerine’s theatrical release is this Friday, July 10, rated R. You can find a list of theaters at Magnolia Pictures.