Flexible displays may be a mainstay of science-fiction, but it’s only recently that they’ve started to filter through into production. FlexEnable hopes to overshadow Samsung’s curved OLED with its own technology, relying on cheaper LCD panels that use plastic substrates rather than glass so as to be both more imaginatively-shaped and more resilient to impacts and other damage.

The name FlexEnable might not be familiar, but company the year-old spin-off originated at might be, if you’ve been following flexible displays at all. Plastic Logic made headlines a few years back for its work on bendable E-Ink panels, and in fact is now supplying the plastic-based screens to other firms like PopSlate. 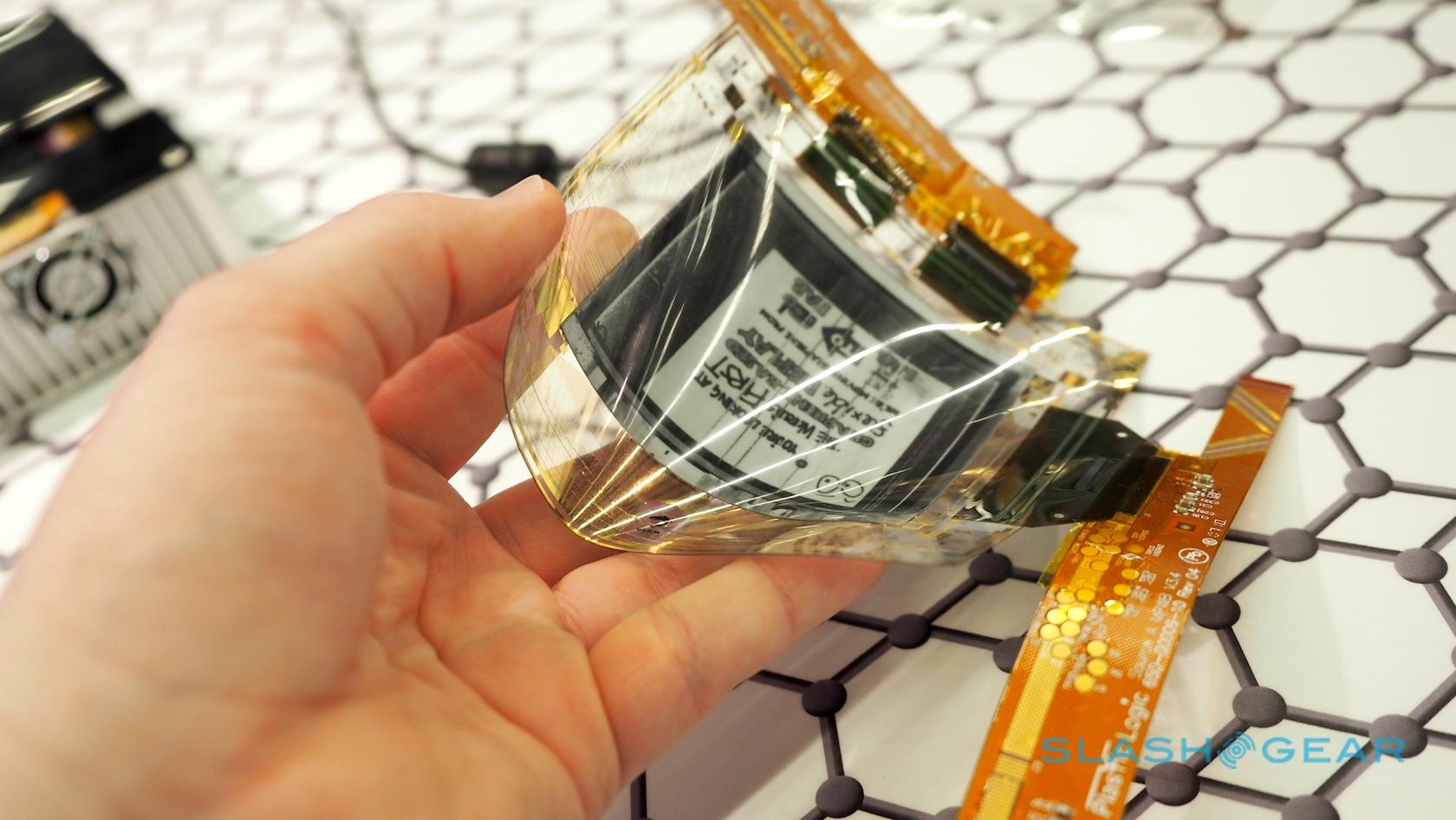 Meanwhile, FlexEnable is focusing on other applications for the substrate technology, which can actually be used both for display and input purposes. The bracelet prototype – which the company put together as a demonstration device, and has no plans to commercialize itself – is one example, capable of showing full-color video.

Although the resolution is a little on the crunchy side, FlexEnable tells me that’s down to its own prototyping equipment rather than a limitation of the company’s tech. Since it uses the same manufacturing processes as a regular LCD – just layering the transistors on the substrate – the resolution could be as high as the fabrication line is capable of.

FlexEnable’s other demonstration at MWC 2016 was the same substrate but turned to input purposes, specifically a biometric reader for fingerprints. An optical sensor, it scans at 300 dpi, and while the prototype is roughly the size of a large postage stamp, it could feasibly be as large as the printer is capable of.

So, you could have a panel as large as your full hand, or the entire lid of your laptop be a biometric scanner. 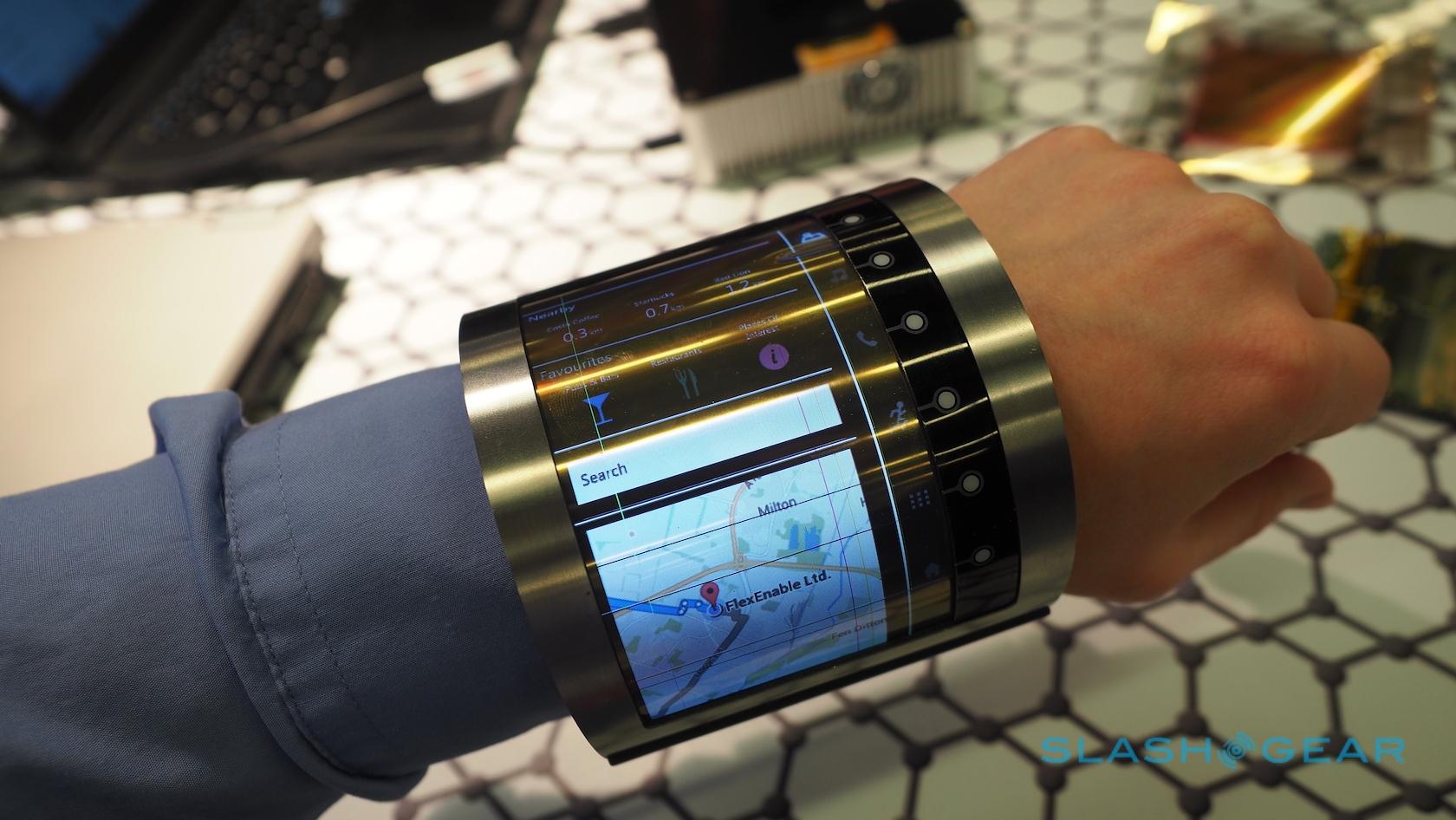 While a fancy display bangle might be somewhat ostentatious – even among today’s often-bulky smartwatches – according to FlexEnable the technology has far more discrete applications. As a biometric sensor, for instance, it could be reshaped to wrap around a door handle, or a phone or tablet case, automatically authenticating you without requiring you to tap or swipe a separate sensor beforehand. 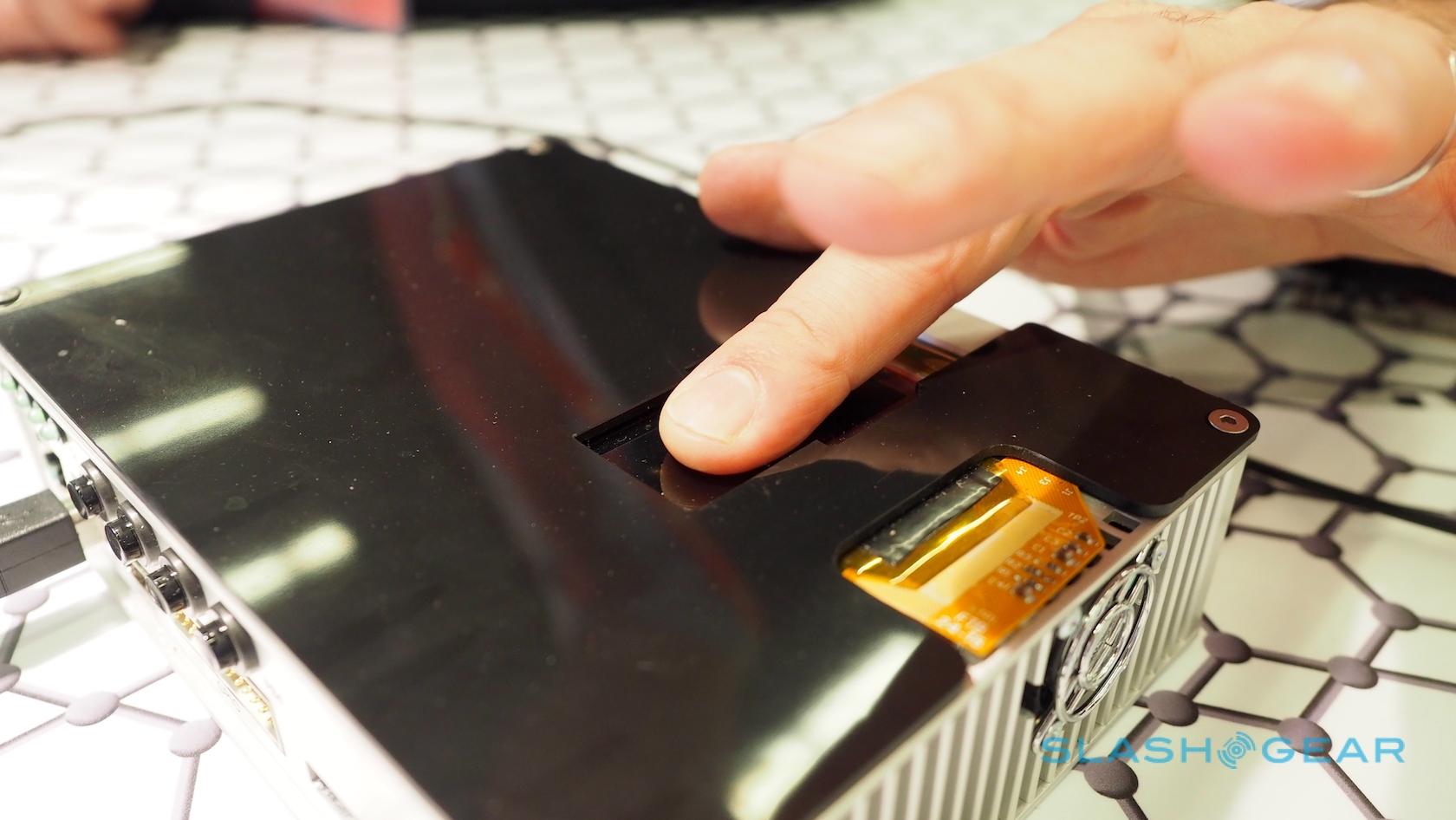 Alternatively, a camera could recognize which user is holding it and switch to their preferred settings. Paul Cain, FlexEnable’s strategy director, describes such uses as “unawarables” which, though a tongue-in-cheek play on words, nonetheless highlights the potential value of conforming surfaces with digital intelligence. 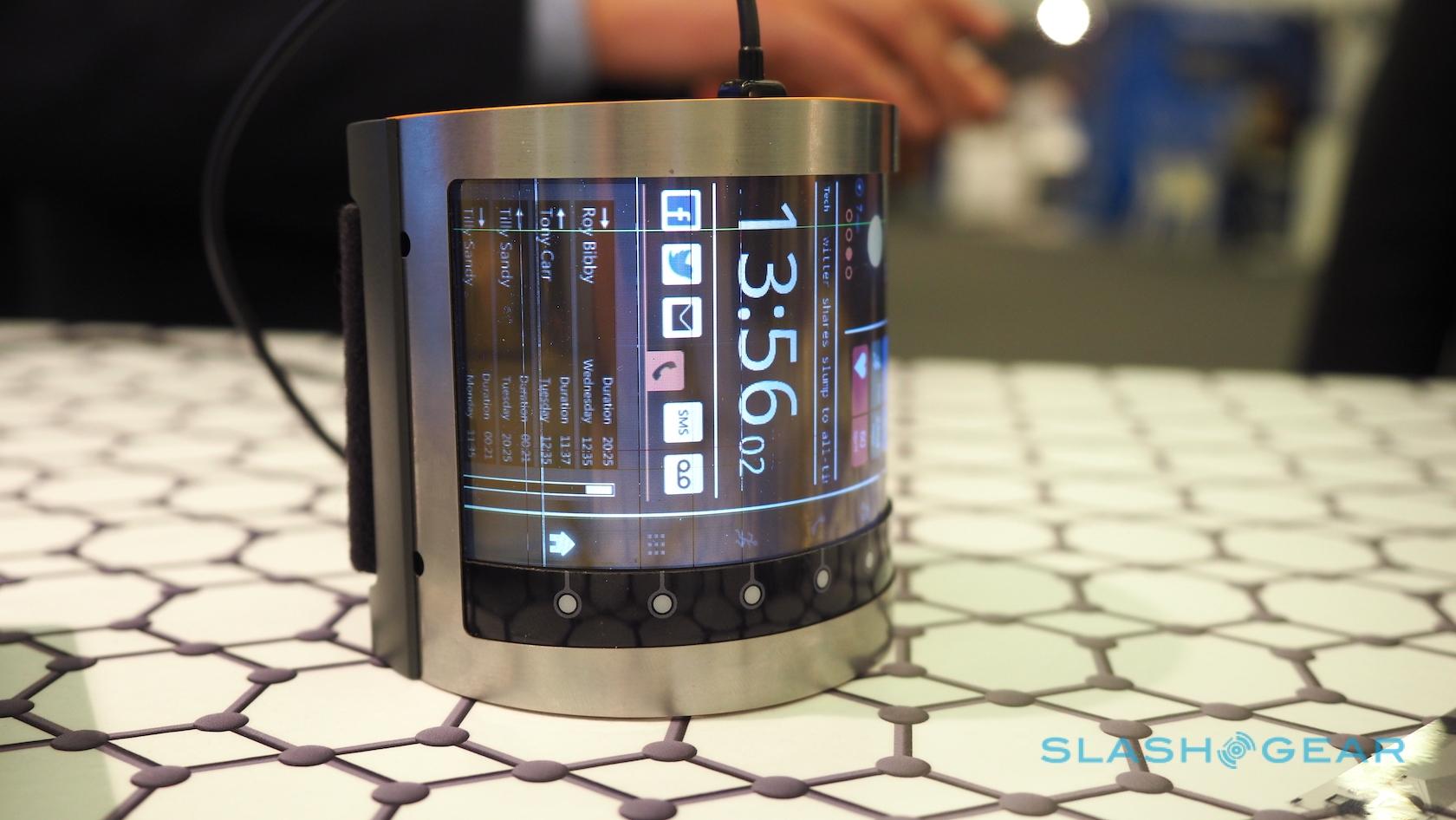 In fact, a single substrate could double for input and output, depending on how it was produced. Resolution would suffer, Cain explained to me, if you also wanted your display to recognize fingerprints, but that would still be enough for door nameplates that also acted as digital locks, perhaps.

One of the other benefits of using plastic rather than glass is that it’s far more amenable to post-manufacture modification. A plastic display or sensor could be cut to non-rectangular shapes, for instance, or even punctured with holes. That way, you could make a smartwatch that has physical analog hands but is backed with a color LCD panel for showing notifications and more. 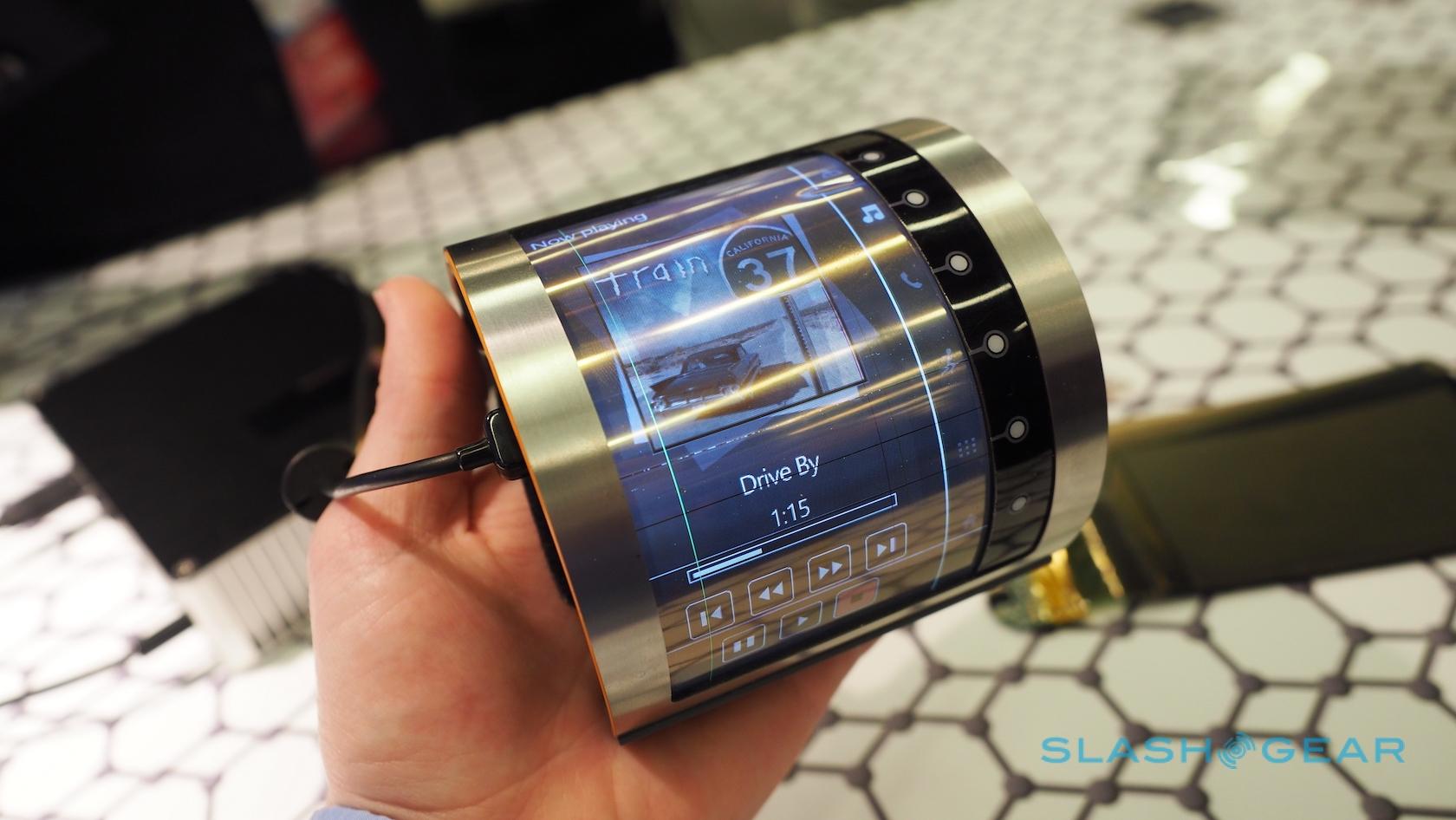 Cain says FlexEnable’s so-called Organic Liquid Crystal Displays (OLCD) are roughly eighteen months to two years out from the market, and unsurprisingly nobody is taking about device partners or specific plans.

Still, it seems likely that the first applications could be less eye-catching than a sci-fi bracelet but, arguably, a whole lot more useful.