It is almost mind boggling that such a basic need, like taking a screenshot to boast about your latest in-game triumph, would take so long to implement. But they say that good things come to those who wait, and those who wait need to wait just a little bit longer. Screenshot capability is finally coming to the Xbox One console when the latest system update rolls to everyone in March. Fortunately, that’s not the only reason to be excited about this update.

OK, maybe it’s a bit too much to get worked up about being able to take screenshots of a game, but even Major Nelson himself concedes that this is the most requested feature by the Xbox One community. Now you can simply double press the Xbox controller button and your screenshot is automatically taken. And what would you do with the screenshot? You can make it your Xbox Home background if you wish, thanks to the new feature on the Upload app. The Upload Studio itself got a bunch of new updates that deserved a treatment of its own.

The system update will bring new settings to control your privacy and online safety, but one new feature in particular seems to counteract that. Now you can opt to share your real name with either all your friends or everyone in the Xbox Live world. The reasons for this, supposedly, is to help Xbox users find you by your real name in case they don’t know your gametag. Do remember to use the feature with caution, however. Speaking of friends, there is a new Suggested Friends area that will, well, suggest new people that you can Friend, from people you might know or just people that Xbox thinks you might want to follow. 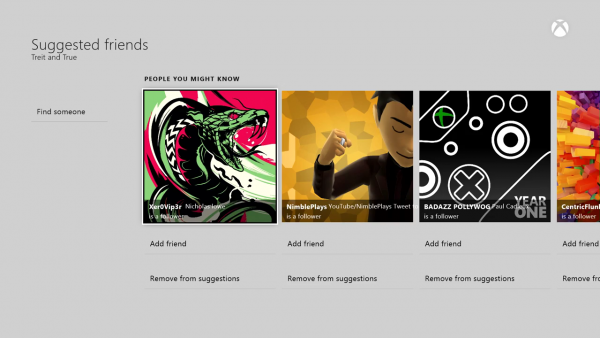 When the update rolls out, Xbox One owners will get the option to set the tile transparency for their homescreen in order to better flaunt that epic screenshot, which you will soon be able to take thanks to the new feature. This has been a long promised feature that is now finally making its way to the community, and may actually hint at a similar feature for Windows 10, on phones to be precise. Xbox One owners from down under have a special surprise for them in this update as well, as OneGuide and the Digital TV Tuner are now open to them.

These are just some of the juicy bits of the update that will be rolling out next month. But those lucky enough to be part of the Xbox One Preview Program are probably already enjoying this feast now.