This week the FCC has approved the Tom Wheeler-promoted next generation of Net Neutrality rules. This new proposal is not yet fully enacted, of course, this week only moving it forward to a 60-day public comment period. After this 60-day period, another 60-day response period will take place.

This new framework is being promoted with the name “Protecting and Promoting the Open Internet.” According to a “Fact Sheet” given to attendees of the FCC session in which this framework was approved, an “extended four-month public comment period” will be open starting on May 15th. The actual comment period will be as follows:

The comment period will aim to summon questions that will “develop the strongest legal framework for enforceable rules of the road.” Wheeler has suggested that “I’ve said repeatedly I’m open to Title II,” going on to say that “there is one Internet. Not a Fast Internet, Not a slow internet.” 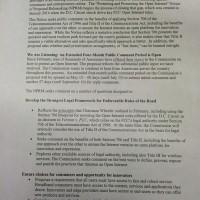 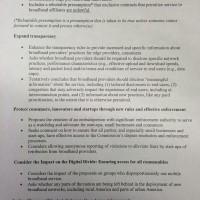 Above you’ll see two parts of a Fact Sheet provided to attendees of the FCC voting session. These sheets were photographed by Recode Press member Amy Schatz. Stick around as we go more in-depth on what’s been proposed and what this vote means for the open internet in our time.

UPDATE: These documents can now also be viewed in PDF form straight from the FCC.