James B. Comey, the current director of the FBI, made statements on Thursday calling for America’s tech companies to make their consumer devices more wiretap-friendly. He believes that the efforts from giants like Apple and Google to provide users with ways to encrypt data and communications on their mobile devices will lead to a future where those who commit murder or acts of terror could have an easier time escaping law enforcement.

In our post-Snowden world, the actions of government agencies like the NSA and the rapidly growing support of privacy advocacy have become hot topics, and rightfully so. With more and more consumers, as well as the tech industry itself, prioritizing user privacy, the FBI has labeled the growing situation it faces as “going dark,” in other words describing its shrinking ability to peek into criminal suspects’ communications.

Comey attempts to shine a moral light on his views, saying that the FBI doesn’t want to change policy in order to give law enforcement a wider authority to intercept communications, but rather, in this time of rapidly changing technology, they wish to maintain their ability to intercept when they are authorized to do so. He sums up his argument by stating that “the post-Snowden pendulum” has “swung too far in one direction — toward fear and mistrust.” 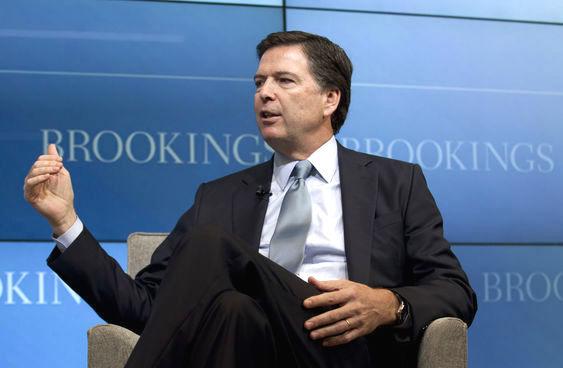 The FBI director mentioned several real-world examples where criminals were successfully prosecuted thanks to evidence collected from cell phones, such as text messages. What Comey would specifically like to see changed is the 1994 CALEA (Communications Assistance for Law Enforcement Act) law, creating an obligation for companies like Apple and Google to build “lawful intercept capabilities” into their devices. Clarifying, Comey said he does not want the equivalent of an all-encompassing encryption key, nor access through a “back door,” but a “front door” that can be used in the right circumstances.

Criticism came quickly from tech experts, as well as the American Civil Liberties Union, who pointed out that whether it’s called a front door or back door, any attempts to weaken encryption only makes it easier for hackers to gain access to citizens’ and business’ private information.

Just to be clear, it seems that Comey was merely expressing his views and hopes for the future, as the FBI has no formal legislation proposals at this time, and the goal at present is to start talking with congress about finding a solution.

But Comey’s statement that should be most worrisome to privacy advocates was this: “Have we become so mistrustful of government and law enforcement in particular that we’re willing to let bad guys walk away?” To which one tech industry representative’s own comment serves as the best response: that when required access to the public’s communication becomes accepted, “there will be no end to access government can demand” to one’s growing number of smart devices, “just because a bad guy somewhere might use such a device in furtherance of a crime.”