One of the biggest challenges for future lunar missions and a subject of intense study by NASA and other agencies is how to deal with the lunar regolith that tends to cling to everything. Lunar regolith can create problems for rocket engines and other critical systems used on the moon’s surface. A company called Masten Space Systems has developed a system that they call FAST or in-Flight Alumina Spray Technique.

FAST works by injecting alumina ceramic particles into the plume created by the rocket engine to create a landing pad by sticking lunar dust together just before the lander touches down. Lunar regolith is a combination of small particles of dust and larger grains resulting from constant bombardment from meteorites on the lunar surface for billions of years.

Regolith is difficult to deal with because of the sharp and jagged shapes of the grains that make them very harsh on everything from spacesuits to rocket engines. During the Apollo missions to the moon, regolith caused equipment to wear much quicker than anticipated. Exhaust from the Apollo era lunar module blew enough regolith around when astronauts left the moon to create a hazard for equipment and experiments left on the lunar surface. 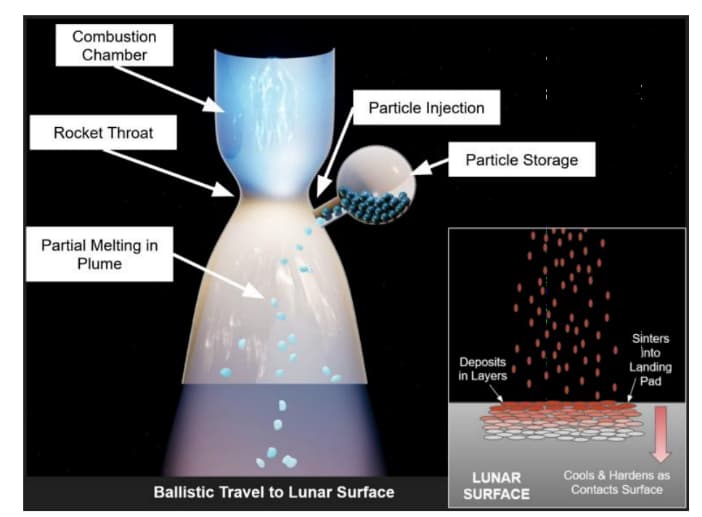 Hazards created by regolith during liftoff will be even more significant with future moon missions because the Apollo Lunar Module weighed 15 tons fully fueled, but landers used for future missions could weigh up to 60 tons at landing. The larger lander will require more powerful engines and will kick up even more regolith. A solution for that problem is FAST, which solves the problem of building a landing pad for a rocket before it lands.

Researchers have completed the year-long preliminary study of the FAST concept. The alumina ceramic particles are injected into the rocket plume as the lander descends to coat the surface beneath the spacecraft, turning the regolith into a hard landing pad with improved thermal and ablation resistance. The creation of the landing pad protects the lander during both descent and lift off. Experiments showed the idea is feasible for spacecraft as large as the Artemis crew lander, and the building of the landing pad can be controlled by the size and temperature of the engine plume.