The Internet is without a doubt one of the most powerful things man has ever invented. It has made the world a smaller place, at least digitally, and has made it easy for any voice to be heard. Almost too easy. It has made spreading false or inaccurate information as easy as clicking “Retweet” or “Re-post”. Coupled with a culture of instant gratification, that has become a recipe for disaster. That disaster has a new name this year, and it’s called “Fake News”. Sadly, Fake news is actually nothing new, aside from the now more severe geopolitical implications. The good news, it can be beaten. The bad news is, it requires undoing the fortunately still young culture of mindless reading and sharing on the Web.

Facebook might now be on the receiving end of public, and maybe even legal, scrutiny over the impact of fake news in the recent US elections, but, let’s be honest, it isn’t the first time news, or any piece of information, has been faked. And it definitely won’t be the last. Scams and misleading reports have been existence for ages, no matter what type of media was in fashion. The Internet only multiplied the sources and ease exponentially. And the results ballooned as well.

The Web has been poised as a grave threat to traditional news sources, and this Fake News situation has only made that case stronger. People “read” (we’ll get to that later) more “news” on the Internet, particularly through social media, rather than newspapers, which, by the time it reaches your hand, is technically history rather than news. But more importantly, the Web has made it equally easy to share those bits of information at no extra cost to time, money, or saliva. It’s word of mouth communication, minus the mouths. It is effective and, at the same time, dangerous.

But unlike traditional media, whether print or broadcast, and unlike, say, gossip, there are both physical as well as economical aspects that put limits on how far or how effective such misinformation can spread. Seeing how effective that has been in the past, people seem to be getting the idea that such systems would also work today. Nothing could be further from the truth.

Given Facebook’s prominent role in the recent spate of Fake News, it has been called upon to enact more stringent measures to weed out inaccurate stories from the real ones. Google and Twitter have likewise spoken up. That is well and good and, yes, these companies that hold our main channels of information and communication do have a responsibility to the world at large. And with their push for artificial intelligence and machine learning, it can be used as a prime example of how computers can sometimes be even better than humans in terms of critical thinking.

It would be, however, a gross error to rely on these systems to keep news in check. The old methods cannot survive in the new media of the Web. In the past, media outlets, both print, radio, or TV, had the resources and even the legal mandate to ensure the accuracy of they would brand as “news”. Reporters were few, countries were like islands of information, and people didn’t mind getting their news a few hours or even a day after.

That, however, doesn’t scale today, when anyone with a smartphone and Internet access can become a news source. Automated systems can only do so much to validate and verify facts. And that’s just for local news even. When something happens half the world away and you don’t have anyone there to cover or verify something, you are practically relying on hearsay. Even major news sites have become, at one point or another, guilty of parroting misinformation. Especially when it’s trending.

The Web has given birth to a new type of journalism, one that is an even sharper double-edged sword than ever before. On the one hand, we can definitely be proud of how it has democratized how news is reported, recording or even live streaming news or crimes that would have otherwise been buried, for one reason or another. On the other hand, however, it has also given those who spread misinformation, either out of malice or out of humor, a broader, and more gullible audience.

If it weren’t bad enough that fake news reaches us so easily, it’s worse that the Web has actually made it easier to repeat and spread it even further, giving it the semblance of truth. Just as it had made everyone a potential journalist, it has also made everyone a potential parrot. And just as parrots simply mimic the sounds humans make without really comprehending them, some social media users are exactly the same way.

Facebook et al. can only do so much to protect the populace from another string of fake news that will rock our perception of what is fact and what is fiction. Just as we have all turned into reporters, we have likewise all turned into fact checkers, editors, and, if needed, whistleblowers. This latest incident surrounding fake news has made people, especially those in the US, more poignantly aware of something that has actually been in existence for years now. It’s probably the best time to get a wake up call and to rethink how we approach news on the Web, and maybe rewire old habits while we’re at it. Here are five simple steps you can not only protect yourself from such fake news but also halt its spread in your own little way.

This is, or should be, really our first line of defense. We cannot and should not simply rely on Google, Facebook, or Twitter to do the fact checking and culling for us. Though they can at least get the ball rolling, there will be some that will eventually slip through the cracks. And since it is statistically impossible for human curators at those companies to check each and every posted article for veracity, it falls on the readers to double check things first. Fortunately, the Internet has also made it just as easy to look around quickly to do just that.

Special mention must be made about specific websites. It seems almost comical how not a few people can still be so easily deceived by websites that so clearly advertise themselves as “satirical”. And yet people still react to them like real news. When, for example, you’re reading something from The Onion, you better be prepared for some tongue-in-cheek reporting.

That said, doing a quick Google search isn’t 100% foolproof either, especially when it comes to trending news, which are bound to rise to the top of search results. Trending doesn’t always mean truthful. Technically, it just means popular, and, as last November showed, popular “news” doesn’t equal factual “news”. Trending can truly be a bit misleading, which is why some people, like our very own Chris Burns, has resorted to simply hiding the Trending News section of Facebook, while waiting for an actual “fix”. If one actually should come.

Ease up on that button

While the above helps you be more informed about real news, one must all try not to spread false reports as well. Facebook and Twitter makes its so easy to repeat the same link or post over and over again, and some people do just that. Worse, some do it even without looking at the contents of the article, only it’s URL Or even worse, some share posts just because their friend did so.

But ever considered that your friend might have mindlessly just reposted something with the same disregard for actual content? Or that, maybe. said friend’s Facebook account was hacked? Just as people are advised not to act in the heat of the moment, it should probably become a nugget of wisdom not to share something just because it’s hot, without first checking if it’s just hot air.

Of course, human frailty is what got into this mess in the first place. Far be it for us to rely 100% completely on human wisdom to fight it. As Albert Einstein is oft quoted to have said, “We can not solve our problems with the same level of thinking that created them”. Luckily, we have technology at our disposal. Yes, that very same technology that has made it easier to spread misinformation can also come to our rescue. 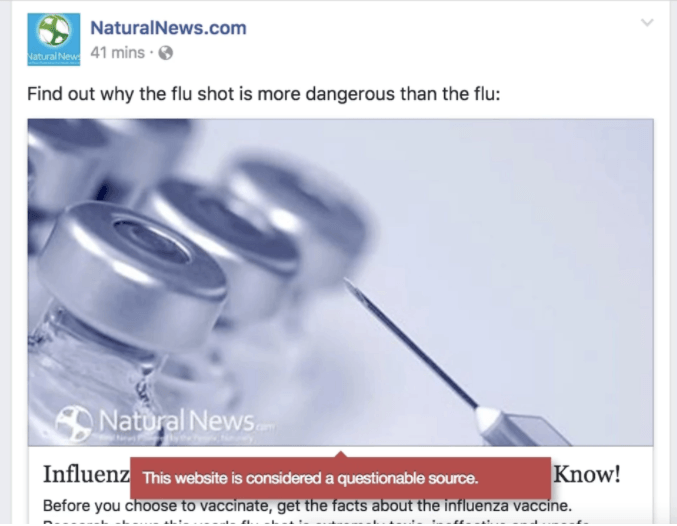 There has been a rise in browser plugins, especially for Chrome, that promise to call BS on fake news. We’ve come across one such tool, appropriately called “B.S. Detector”. Do, however, take care when downloading such third-party apps and add-ons, as very enterprising humans might also be taking advantage of the frenzy to earn a quick buck with malware.

Exercise a bit of that brain muscle

In the final analysis, our greatest weapon should be our brains. Should be, but, sadly, isn’t. Forbes has called out the unfortunate truth that we might have, as a culture, given up critical thinking for the sake of convenience and speed. It won’t take a rocket scientist to separate truth from lies, especially when there’s a mountain of evidence (ironically, on the Net) stacked against it. But just the fact that we actually don’t scrutinize every piece of information that comes our way belies the real problem that underscores it all. We have become a culture of instant gratification.

Then again, if one tried to check every piece that floated into our Web radars, our brains might explode from information overload. Perhaps it is also a wake up call to curate our sources of information down to the absolutely critical and trustworthy ones. And, no, that probably doesn’t include Facebook.

After reading all of the above, you might snicker and shrug it off as common sense. And, indeed, they are. Sadly, “common sense” has actually become a misnomer, because it isn’t common at all. It takes strong, memorable, and tragic moments to make us realize how fickle, insecure, and unreliable our digital lives really are. But rather than taking it as a sign to give up, it should be received more as a challenge and as a call to action instead.