As we enter February of 2013 we’re finding ourselves inundated with news about gun violence in the USA with special focus on school shootings and how this all relates to video games – and today one gun manufacturer has made one perfectly clear connection between the two. Not a connection between gun violence in the shooting of human beings and video games, or between this man’s firearms and the murder of innocent victims, but between his business and the video game industry. In one simple affirmation, Ralph Vaughn of Barrett Rifles has shown how cash flows from one to the other.

Speaking with Eurogamer about his lovely invention of the M82, various assault rifles, and sniper rifles alike, Barret made it clear that video games that feature firearms with brand names on them have to pay the creators of those firearms a cash sum. Just as it is with video games that show racing cars or shoes with the Adidas logo on them, cash must flow in one direction or the other. It’s much more rare that a simple no-cash agreement will appear between the makers of the video game and the company that holds the rights to the products used in said video game.

The fact that Barrett has worked with companies came first, “yes, we’ve worked with companies to send our sniper rifles into video games.” Simple enough, but which games are we talking about here? Pushed with this question from Eurogamer once again, Barrett said, “Which ones? Our license agreement prohibits us from mentioning a company by name. [but] you are welcome to check out the Call of Duty series.” The video you’re seeing below comes from Piston2x and shows the intense detail included in the Call of Duty series and – perhaps more importantly – how important the actual real-world gun is to those playing the game.

Also of from Eurogamer comes a quote from Martin Hollis, director and producer of the original most awesome multi-player shooter ever made, GoldenEye. He makes it clear that back when the game was released they were told they’d have to remove the names of the guns from the final product likely due to the amount of work they’d have had to do to get licenses back in that transitional time. “I assumed novelists and filmmakers have no compulsion to license”, he noted, “I was not pleased [we had to remove the real names] because it would decrease the realism, or at least the verisimilitude.” Such things are still considered in video games today. 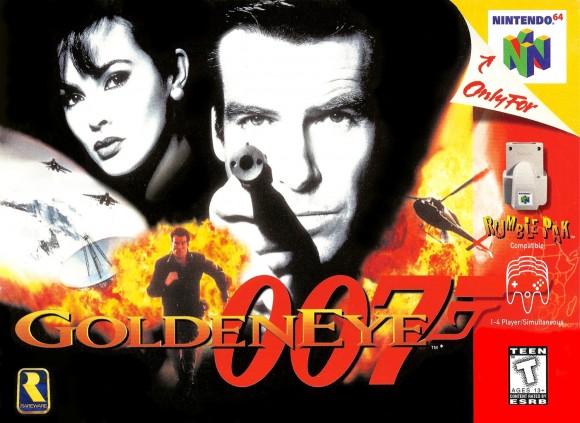 What do you think, gamers, are you more apt to play a game in the guns have real-world names attached to them? And those of you who didn’t realize purchasing a video game could send cash to arms manufacturers – what’s your opinion of the situation now?