Facebook will allow former President Donald Trump back onto the social network in two years time, finally putting a date on when the controversial suspension will be lifted. Trump was barred from using Facebook and Instagram in January 2021, after several posts deemed to incite the riots at the US Capitol Building on January 6.

Facebook opted to suspend Trump from using his accounts, as the then-President continued to perpetuate false rumors about the authenticity of the US election. Five people died during the riot, and more than 140 people were injured in the storming.

The decision by the social network was a divisive one, and was referred to Facebook’s independent Oversight Board after questions around both the validity of the suspension and the indefinite nature of the ruling. The Oversight Board pushed back last month, agreeing that barring Trump was appropriate, but insisting that Facebook must make the final decision on how long that suspension would be held for.

Today, Facebook made up its mind as promised. “Given the gravity of the circumstances that led to Mr. Trump’s suspension, we believe his actions constituted a severe violation of our rules which merit the highest penalty available under the new enforcement protocols,” Nick Clegg, VP of Global Affairs at Facebook, said in a statement. “We are suspending his accounts for two years, effective from the date of the initial suspension on January 7 this year.” 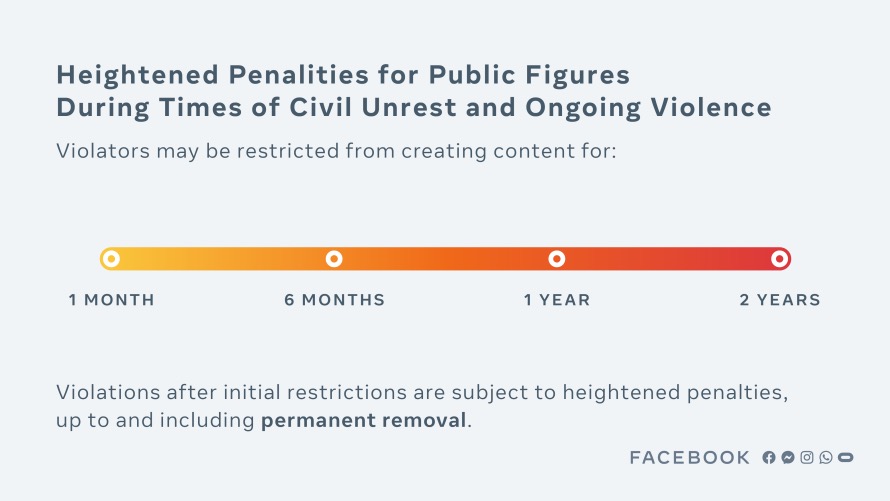 It will mean that Trump can theoretically return to his suspended accounts on Facebook and Instagram in 2023. The penalty is the greatest of Facebook’s new policies for “public figures during times of civil unrest and ongoing violence,” which range from a month through to two years. However, assuming Trump does indeed return to the social networks, he’ll be under a probation of sorts.

“Violations after initial restrictions are subject to heightened penalties,” Facebook says, “up to and including permanent removal.”

Indeed, at the end of the two year suspension, Facebook “will look to experts to assess whether the risk to public safety has receded,” Clegg says. “We will evaluate external factors, including instances of violence, restrictions on peaceful assembly and other markers of civil unrest. If we determine that there is still a serious risk to public safety, we will extend the restriction for a set period of time and continue to re-evaluate until that risk has receded.”

As Clegg points out – perhaps preempting complaints by some – this will not prevent Trump from speaking publicly. It’s likely there’ll be some confusion around just what the First Amendment actually covers, and what Facebook’s responsibility toward protecting free speech actually is as a private company.