Today an update from Facebook changes the way Facebook Groups are labeled. No longer will there be a choice between public, closed, or secret settings. Instead, there’ll be a choice between “public” or “private.” Given the *most recent Facebook privacy flubs and government action regarding Facebook’s failings in keeping user data protected, increased use of the word PRIVACY in Facebook PR should come as no surprise. Today we get an example of a place where Facebook is literally placing the word “Private” so users can be sure to feel like they’re in a Private place.

The message to Group admins and users this week suggested that “We’ve also heard that most people prefer to use the terms ‘public’ and ‘private’ to describe the privacy settings of groups they belong to.” This message was written by Jordan Davis, Product Manager for Facebook Groups, who also suggested that this recent Private Groups Safety post outlines the ways in which Groups are now moderated – with items like “proactive detection.” 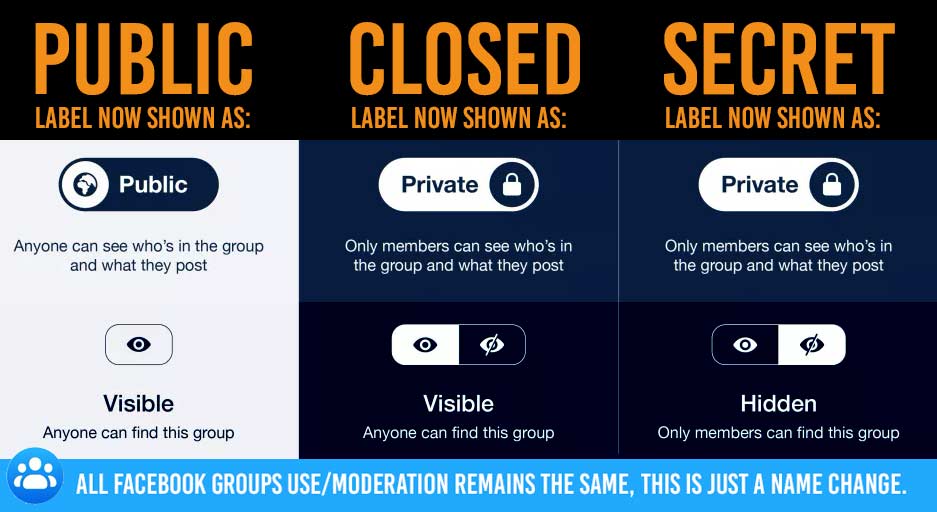 For users – don’t worry too much more than you’ve already been worrying about Facebook cutting off 3rd-party access to your data after leaving the door open longer than intended. Also remember that this is all part of Facebook’s public reaction to their unprecedented slap on the wrist from the FTC.