Earlier this month we heard some relatively unofficial news about Facebook’s FTC fine and fallout. Today the FTC made it all official with some friendly infographics that they are, indeed, levying a major fine against the Social Network. They’ve made the case that they’re bringing big penalties to Facebook, and that this is super serious! But fancy graphics and additional assurances of the scale of the changes do not necessarily an adequate penalty make.

We talked about this fine, these penalties, and the fallout earlier this month. We spoke about how $5 billion dollars seems like a lot of money – especially given the fines the FTC’s sent to companies in the past. We spoke about how none of that mattered when it came to Facebook because Facebook is not like any company the FTC’s fined in the past.

Facebook looks at $5 billion and just… you know… pays the bill. They earmarked money for this fine before the fine was even announced. They’ve got the cash to pay for this many, many times over. This will make such a small dent in Facebook’s war chest of cash that stock prices WENT UP when the first leaks of the penalty were publicized.

the fact that fb shares surged instead of sank on the FTC news is the story https://t.co/SztA1iAyOg pic.twitter.com/qDrzaR8J4Q

But now the FTC wants to make sure you know that the $5 billion penalty – (written with all the zeroes so you know how much money it is!) – will be an unprecedented amount of cash. For the FTC. They’ve announced a new privacy structure at Facebook and new tools for the FTC to monitor Facebook, too.

They’ve made some more graphics too, to make sure you know how BIG the fine is! It’s such a big fine, wow! Look at that big circle. Right? Such a big fine, surely it all matters a whole lot! 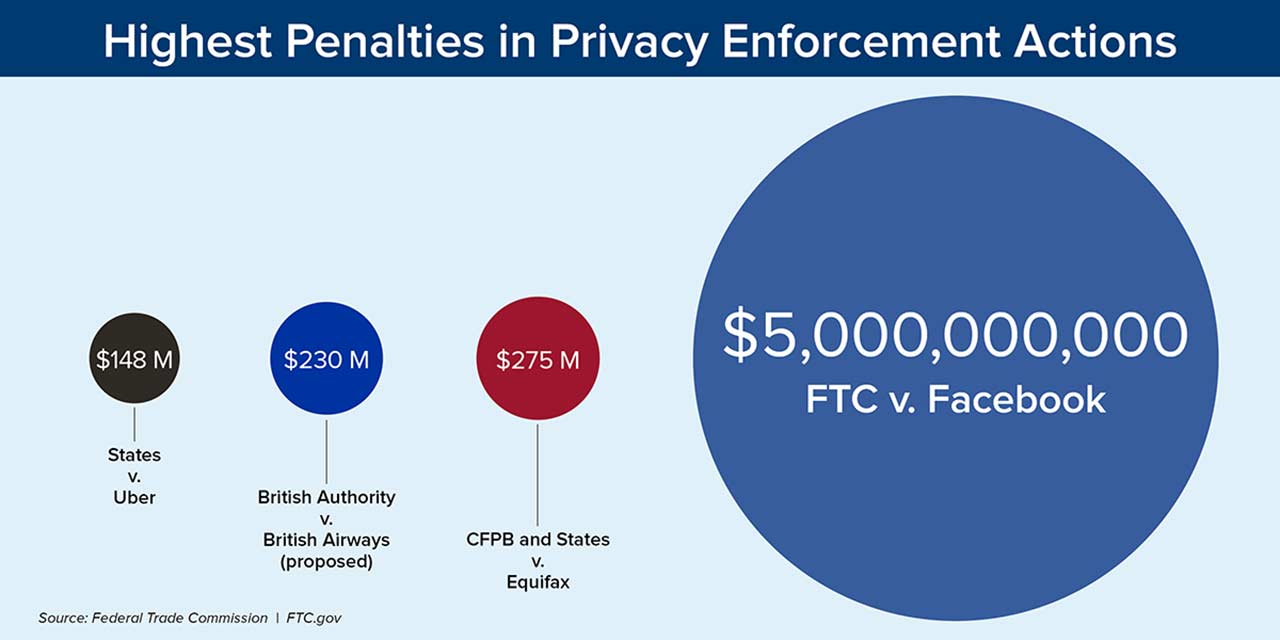 You can read the full official announcement at the FTC right now if you wish.

On the positive side of this situation, the FTC’s announcements included some words that were far closer to fitting the actual bill – seeing and speaking on the actual situation – than the fine does.

“Despite repeated promises to its billions of users worldwide that they could control how their personal information is shared, Facebook undermined consumers’ choices,” said Joe Simons, FTC Chairman.

“The magnitude of the $5 billion penalty and sweeping conduct relief are unprecedented in the history of the FTC,” said Simons. “The relief is designed not only to punish future violations but, more importantly, to change Facebook’s entire privacy culture to decrease the likelihood of continued violations. The Commission takes consumer privacy seriously, and will enforce FTC orders to the fullest extent of the law.”