Facebook Messenger Kids sleep mode: Here’s how to use it

Facebook is adding a sleep mode for Facebook Messenger Kids, allowing parents to control when young users get access to the app. The new feature follows the launch of the child-friendly version of the instant messaging app last December, intended to quiet concerns that younger users of the social network could be talking with predators.

To do that, it avoids a dedicated Facebook account – and the ensuing public profile – for the child altogether. Instead, it’s the parent of the child who creates a specific Messenger Kids account, to be loaded on whatever phone, tablet, or other device the young person uses. Any contacts have to be approved by the parent first, before they’re available to chat with, and message history can’t be deleted.

Factor in the lack of advertising anywhere in the app, and the ability for the parent to block troublesome contacts if needed, and Messenger Kids was off to a good start. One of the most frequent complaints about the app, however, was its absence of granular control over when, exactly, it could be used. That’s something Facebook is addressing now. 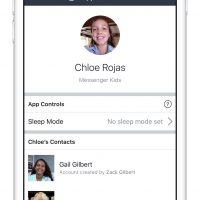 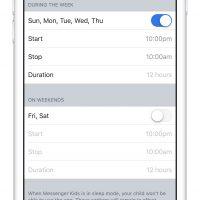 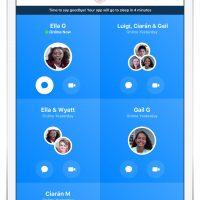 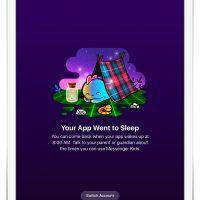 The new Facebook Messenger Kids sleep mode allows parents to set designated off times each day. After that point – which could be dinner time, while they’re meant to be doing homework, or when they should be in bed – the service shuts off completely. It then reactivates a preset number of hours later.

As you might hope, the settings aren’t available within the kids’ version of the app. Instead, parents establish their preferred scheduling within the Parent Control center, accessible in their own Facebook account. Different times can be set for weekdays versus weekends.

To set it up, go to the Messenger Kids controls section in the main Facebook app. Pick the particular child’s name you want to adjust the settings for, and then choose “Sleep Mode” from the list of options. Then, choose the times you want it to activate and deactivate.

If the child tries to access the app while sleep mode is active, they’ll get a message notifying them of that fact. During that period, they won’t be able to send or receive messages or video calls, use the creative camera, or even get notifications. If parents need to temporarily override the settings, such as to communicate with their child themselves, they can turn sleep mode off within their own Facebook app.

Family-friendly features like sleep modes are increasingly becoming a part of modern electronics. Routers like Google Wifi, for example, have begun offering ways to shut off WiFi access during set periods or on an ad-hoc basis, to avoid people playing with phones and tablets while at dinner. Nonetheless, as Facebook suggests, it’s probably best to have a conversation with your family as you configure the new mode, just to avoid any unpleasant surprises when they find themselves cut off.