Facebook has joined Fortnite developer Epic Games in criticizing Apple over its App Store payments cut, calling out the iPhone-maker as it launches a new events service. Small businesses and creators will be able to use Facebook for paid online events without coughing up any fees, the social network says, that is unless their customers are doing so via an Apple device.

“Many businesses are struggling and every cent matters,” Fidji Simo Vice President, Head of Facebook App, explains in a blog post. “Shifting in-person events to online is costly enough that businesses shouldn’t have to worry about fees charged by platforms.”

Event organizers will get all of the fees that participants pay, if they’re making that payment either via the web or on Android in countries where Facebook Pay is available. However, Simo says, when Facebook approached Apple about allowing the social network to exclude these payments from the 30-percent cut it takes on revenue made through the App Store, the Cupertino firm couldn’t be budged. As a result, those who sign up to paid events through an iOS device will pay the same amount, but not all of it will go to the event holder. 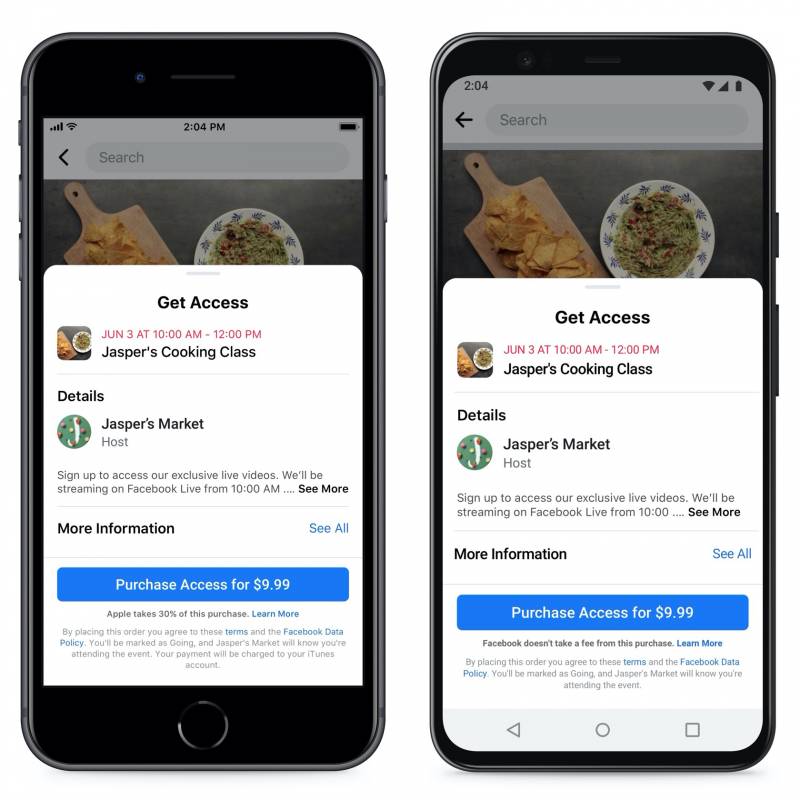 “We asked Apple to reduce its 30% App Store tax or allow us to offer Facebook Pay so we could absorb all costs for businesses struggling during COVID-19,” Simo says. “Unfortunately, they dismissed both our requests and SMBs will only be paid 70% of their hard-earned revenue. While Facebook is waiving fees for paid online events we will make other fees clear in the product.”

On iOS devices, such as in the Facebook for iPhone app, there’ll be an explanation under the payment button stating that “Apple takes 30% of this purchase.” On the Android version of the app, it’ll say “Facebook doesn’t take a fee from this purchase,” meanwhile.

It comes only a day after Epic Games poked the bear and added its own payment system for the in-game currency in Fortnite, its chart-topping mobile game. Apple reacted swiftly, pulling Fortnite from the App Store and accusing Epic of trying to circumnavigate its well-established policies. Google followed suit, yanking Fortnite from the Google Play store.

Fortnite responded by suing Apple, accusing it of anticompetitive practices with the App Store, and then suing Google too. It’s all been a fairly calculated process – Epic took the time beforehand, for example, to create a parody of Apple’s well-known 1984 commercial – just as, indeed, Facebook’s move today to criticize Apple seems fairly contrived as well. In the end, it’s unclear just how this will pan out and what sort of concessions Apple will be willing, or forced, to make.