Today the world finally got its first taste of Facebook on the iPad, officially, that is, as the Facebook developers finally granted us an audience with their own vision for the perfect way to view the social network on an iPad. Notice how I didn’t say tablet there? This is because Facebook on the iPad specifically is such a big deal that it caused a ruckus at an official Facebook event last year when, after being asked if Facebook was coming to the iPad, Zuckerberg spat “it’s not mobile” – that event being based around mobile, it was simply expected. Now nearly a year later, we’ve got it!

This Facebook application comes aside updates for the iPhone version, both of these versions being released in the same app. This is a relatively rare thing for iOS apps, as generally there will be one app for either iPhone or iPad, OR one for each, not simply one (sitting in the iPhone category, mind you,) that covers both. Here that update is, ladies and gentlemen, and it’s pretty much ok. It’s certainly not the nicest interface for a tablet-based web content browser I’ve ever seen, but it certainly ranks amongst the top looks at Facebook.

Before we go any further, check out what lies above – our hands-on video of what the app looks and functions like here today at launch, and of course expect a billion updates over the next few weeks as the public rustles up any kinks. 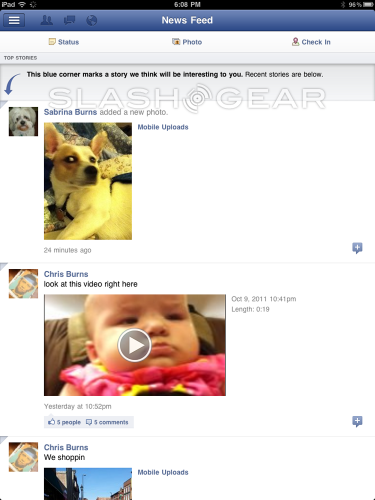 What we’re looking at here is an attempt by Facebook to replicate your browser-based abilities across the board, with the notable exceptions of games and of course video chat. Instead you get some really nice gallery and location-based interfaces, the latter allowing you to see who is near you using Facebook, this done with check-ins based on GPS location. If you log yourself and a friend in to a location, you’ll both appear on this map together. How cute! 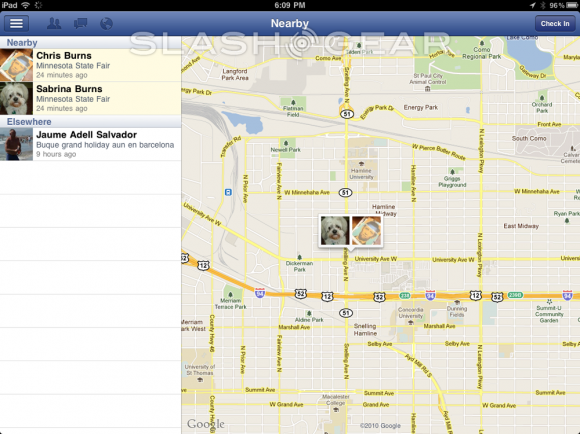 You can search for friends, browse your friends who appear as gigantic tappable profile squares, and interact with your friends via messages and chat the same way you can on your web-based Facebook. The difference between landscape and profile views of most interfaces here on the Facebook app are slight, save the news feed which, in landscape mode, shows your list of online friends with whom you may then chat.

You can run alerts of all kinds through your iPad so you can see when you’ve got an update in essentially any part of Facebook, sounds attached. The difference between this app and the previous version of the iPhone-only app are that this version is obviously built for a much bigger screen, you’re able to search through people, pages, and supposedly games – though we’ve been unable to access games anywhere as of yet. 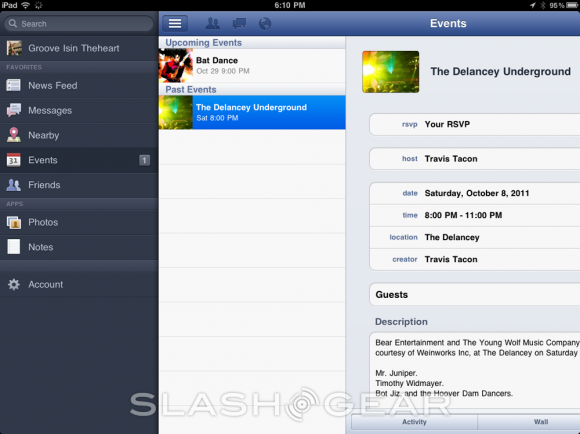 Next there’s the sidebar menu you’ll get to know in the demo video on this post, and Navigation. With this new navigation you’ll be able to access things like friend requests and messages without leaving the page you’re on, this thusly giving you a much more versatile interface to work with. 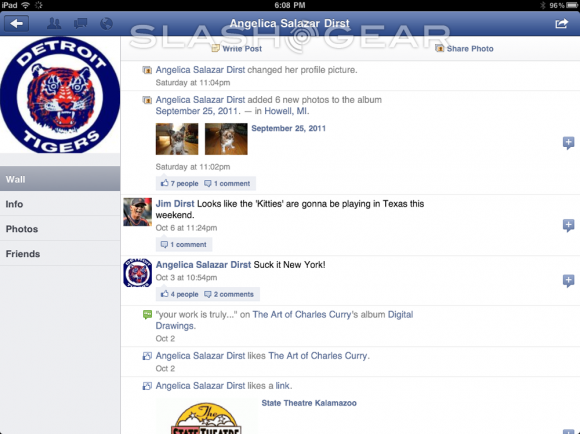 And it all works pretty great except for the ONE tiny bug found whilst viewing photos – that terrifying man face, the one you see in the photo below this paragraph, got stuck to the screen at some point, and wouldn’t go away until the entire app was closed and re-opened. Terrifying! Other than that, everything looks nice. 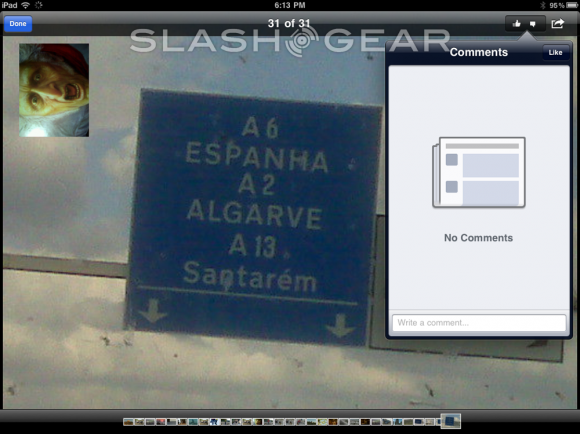 Check out the photos below and the video above and go download that app right this second, completely for free, in the iTunes App store.