Facebook B8 device will help you “hear with your skin”

The folks at the Facebook innovation lab “Building 8” have announced Project: Hear With Your Skin, one of two projects aimed at new types of communication. “Two projects focused on new capabilities of communication” is what the folks at Building 8 (B8) are suggesting this set is all about – the other is “Project: Type With Your Brain”. With Project: Hear With Your Skin, work begins by developing and building the hardware and software Facebook will need to “delivery language through the skin.”

A representative of Facebook’s Building 8 explains that this project is built starting with knowledge of previous, similar projects. One of these is the Tadoma method. This method had deaf and blind users communicate through changes in pressure in the air. They’d feel puffs of air and vibrations in a person’s throat and jaw to understand what the person was saying. The Tadoma method was based off the experience of Helen Keller. Below you’ll see some demonstration of this method done at the Massachusetts Institute of Technology (MIT).

Facebook Building 8 creators also worked with Braille – tiny bumps on paper that can be “read” by users without sight. They worked also with the knowledge that human skin is a 2 m2 network of nerves that transmits information to the brain. “From the 1950s to today, what all of these techniques have in common, is our brain’s ability to reconstruct language from components,” said a Building 8 representative from Facebook.

The video you see above was originally captured at F8 and posted by Karissa Bell. “The cochlea in your ear takes in sound and separates it into frequency components that are transmitted to the brain,” said a Building 8 representative. “We can do the same work of the cochlea, but transmit the resulting frequency information, instead, via your skin.”

“You have 2 square meters of skin on your body, packed with sensors, and wired to your brain,” said Facebook Building 8 leader Regina Duncan. “In the 19th century, Braille taught us that we could interpret small bumps on a surface as language. Since then many techniques have emerged that illustrate our brain’s ability to reconstruct language from components. Today we demonstrated an artificial cochlea of sorts and the beginnings of a new a ‘haptic vocabulary’.” 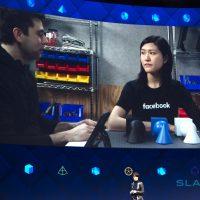 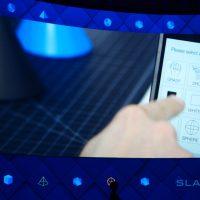 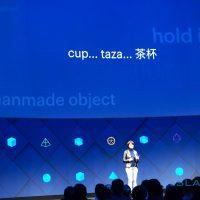 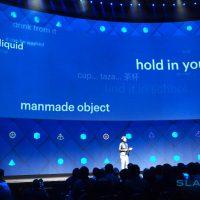 The folks at Building 8 in Facebook will be making hardware and software to allow users to hear with their skin some time in the future — they’re hard at work at making it all a reality right now. Whether release of this magical project be the distant future or rather soon, Facebook B8 has not yet revealed. Cross your fingers for read-novel-by-magic soon – easy peasy style.