If HP’s inkjets were as interesting as this DIY Facade Printer, the company wouldn’t have had to buy Palm just to get some press coverage.  The handiwork of German product designers and engineers Martin Fussenegger, Michael Haas and Julian Adenauer, the inkjet-with-attitude is capable of precisely firing individual colored dots from up to 20 feet away, creating huge – and surprisingly accurate – murals on whatever wall is unlucky enough to get in the way.

The printer was constructed from a converted paintball system, hooked up to an industrial PC running custom software.  Using the touchscreen, images in SVG format can be loaded from a USB drive and overlaid onto a digital photo of the blank wall; that allows the artists to frame the painting exactly.  A laser is then used to indicate on the wall exactly where the paintballs will be fired – useful if you discover you’re currently standing where some high-speed Dulux will soon be approaching – before 5-10cm dots are created by the 200km/h colored balls.

Thanks to nifty paint technology the end result can last on the wall for as long as months or as little as a few hours, reacting to UV light to fade away.  Meanwhile the paintball shells are made of gelatine and will decompose in rain. 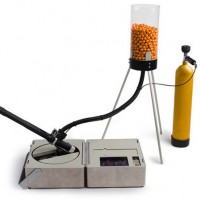