One of the common justifications we hear for digital photo frames missing out on wireless connectivity is that it makes the display too expensive.  eStarling have decided to turn that premise on its head, with the arrival of the Impact7: a 7-inch display with WiFi, touch-controls and a remote control, priced at under $100.

Setup is all done on the frame itself, rather than requiring a PC, and once that’s done you can use eStarling’s webportal to funnel images from your Flickr, Photobucket and other online galleries, from your Facebook contacts, and from RSS feeds direct to the display.  Each Impact7 has its own email address, with an “authorized address book” to control who can send images, and eStarling offer a free iPhone app which adds a “Send to eStarling” option to the cellphone’s camera.

Online there’s a photo editing package for making picture tweaks, plus you can schedule when photos will arrive.  eStarling have also built a remote holder into the frame itself.  The only thing better would be cellular connectivity, such as on the T-Mobile cameo, but of course that would likely tie you into a monthly contract. 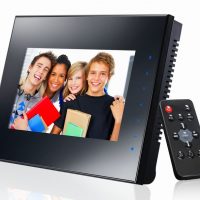 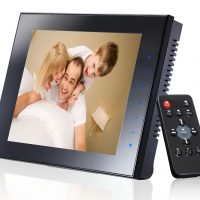