The fan-favorite science fiction novel Ender’s Game is getting it’s own movie this November, and in the weeks and months leading up to that point, more than a few teaser images from on-set and in-film will be shared. Today’s shot is taken straight from the film and shows the mess hall from the battle school that a large chunk of the movie will take place in. It’s got two quite easily identifiable main characters up front, a few in back, and a lovely handful of non-human items throughout to tease us all wildly.

As it was with the Army logos shared earlier this week, so too has this image been shared exclusively with the likes of fan sites like Ender’s Ansible. What the Ansible has done is to go through pre-release and pick out the goodies involved in the image which we’ll also be speaking about here – in addition to our own insights as well, of course. The first thing you’ll notice is Ender (played by Asa Butterfield) on the right speaking with Petra Arkanian (played by Hailee Steinfeld) on the left.

These two characters are central to the storyline, with Ender appearing from start to finish and Petra playing a big part in Ender’s journey through the battle school. Behind them in the mess hall you’ll notice a big digital screen with a couple of army logos on it (Rat and Asp). This board appears throughout the story in relation to the Battle Room games the students play in the battle school. There’s a ranking for each student both inside their army and in relation to the rest of the school, and each battle is shown with army vs army scores on the big board immediately following a match.

The scoreboard also shows that one of two things is possible. Either there aren’t nearly as many people in a battle in the book as there are in the book, or they’re simply showing 8 team members at a time instead of all at once. It may make more sense to have fewer students battling at once rather than the 40+ on each team the book speaks of simply because so many characters are easily lost on the big screen.

You can also see statistics of the battles taking place on either side, with variables being shown regarding full body freezes, partial outs, and all that good stuff – not up close and clear yet, but there’s really nothing else all that junk on the right and left could be. To the immediate left or right of the army logos up on the screen you’ll also see some health bars (or point bars) being shown for a battle currently in-progress. It may be that the center circle is showing the battle virtually as its taking place as well – the red and blue lines represent the army’s gates.

NOTE: It is pointedly odd that these two commanders would be in the mess hall at this point in the story as there’s a Commander’s mess hall separate from the rest of the army members. It may be that this separation is done away with in the movie altogether. 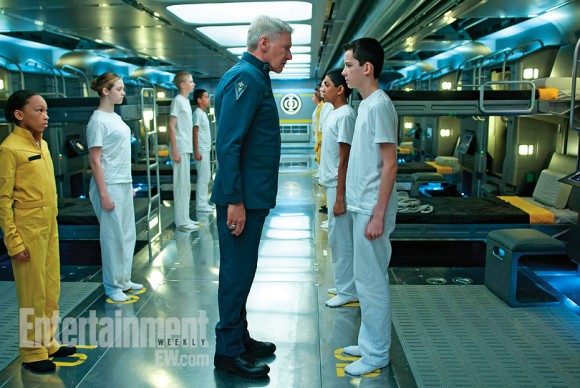 The person in the yellow suit on the left is likely in the employ of the battle school. You’ll see a similar suit in the first photo shown to the public (seen below) with Harrison Ford as Colonel Graff. It could also be that the yellow suit is a Flash Suit, or the first layer of one. A Flash Suit is a special outfit a student wears when they enter the Battle Room, there freezing any part of their body that’s hit by one of the flash guns used in the game. 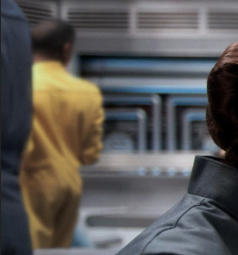 And that’s it! There are a few more teeny-tiny color marks in the background on people’s shoulders that might reveal other team logos, but we can’t be too sure. Teal and red are what we’re seeing, though Rat is also red – perhaps a member of Rat that’s out with a broken leg.

For those of you wishing to see the full-sized version of this image, just have a click in the smaller gallery below – it’s massive! Stay tuned to SlashGear for more Ender’s Game movie madness all the way to November – hit up our Entertainment tag portal for more information and posts galore!