One of the coolest things to happen in space and automotive news in a long time was the successful launch of Elon Musk’s personal Tesla Roadster atop a Falcon Heavy rocket during the first test flight for the new rocket. That launch was successful, and you can watch the Tesla head towards Mars.

Some have been concerned that the Roadster might crash into the Red Planet and contaminate the world, which might have its own microbial life. Some were not happy that the unsterilized car was put into space since NASA goes to great lengths to avoid potential contamination of other planets. Scientists have now put some effort into what will eventually happen to the Tesla Roadster.

The new scientific study found that the risk of contamination to Mars from the Tesla is minimal. The paper titled “The random walk of cars and their collision probabilities with planets” was penned by a trio of researchers from the University of Toronto. The lead author of the paper is astrophysicist Hanno Rein and he says that the paper came out of advanced orbital-mechanics computer simulations.

According to the team, Earth is the most likely place that the car will eventually crash. The next most likely location would be Venus and then the sun. When will this crash happen? Likely within 10 million years. The calculations found that the Roadster would fly past Mars orbit and swing back around repeatedly.

Every 30-years or so the car will come “relatively close” to Earth. The car will come within the Earth-moon distance to the planet in 2091, possibly allowing telescopes on Earth to view the vehicle and “Starman.” By the third flyby of Earth, the orbital pattern will be “somewhat unpredictable” according to Rein. Not one single collision with Mars has been seen in 240 computer simulations. 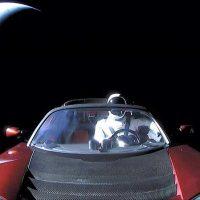 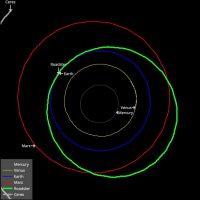