ELF rides the line between car and bicycle for green future

The company known as Organic Transit has made an effort this year to show off a vehicle known as ELF, letting it be seen for the first time at the international technology trade fair known as CeBIT. This machine is made to fill a previously un-touched niche between car and bicycle, made to work with users hoping to make their short commutes as easy as possible.

This machine works with a solar-powered motor that assists with pedaling, runs on three wheels, and comes in at a height that’s the same as a sedan. As this vehicle can “go anywhere a bicycle can”, it’s allowed to traverse more than just the road, allowing for cross-over movement that’d be hindered with a motorcycle. As it works with a motor, it’s not as restricting to a rider’s time as a human-powered unit is.

“Many commuters have thought about taking their bikes to work, but worry about staying fresh, falling over, climbing hills, carrying groceries, getting caught in the rain or even safety. ELF takes care of those concerns with a covered body and a solar-powered motor that assists in pedaling. Commuters can use the motor on the way to work and then pedal as a workout on the way home.” – Rob Cotter, CEO, Organic Transit 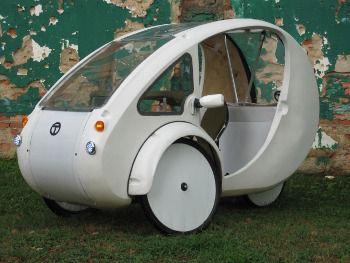 One way to work, one way back, allowing for more than one method for getting either way. Organic Transit has pushed this unique set of abilities to the public with an initial sales run of 120 ELF cars, all in their first three months. Once limited supply is up, they’ll be able to ship more of their 1,200 pre-orders.

Though the idea that this machine is allowed most places a bicycle can go might surprise those that find the base cost of $4,000 USD to be a bit hindering, but considering the complete lack of a need for gas has had its effect. This machine works with solar power, you must keep in mind, and with the same amount of power “equivalent to one gallon of gas”, this vehicle can travel 1,800 miles.

The company making ELF is located in Durham, North Carolina, and they assemble each unit in a warehouse in downtown Durham “for all to see.” Cotter has made plain his intent to follow this model of downtown urban locations for offices so that the work on these vehicles can be seen by the public.

Let us know if you see an ELF hitting the streets where you live soon – we’ll be trying to track down a few of our own. ELF races, here we come!