Electrify America has revealed how it will more than double its EV charger network in the US and Canada, aiming to have more than 1,800 locations open in North America by the end of 2025. Dubbed its “Boost Plan,” the strategy for the Volkswagen-backed charging company should make it easier to find up to a 350 kW charger, which can add dozens or more miles of range to an EV in just minutes.

Charging infrastructure has proved to be arguably the biggest headache among the combustion to EV transition. While VW may not have originally intended to roll out its own counterpart to Tesla’s Supercharger network, it agreed to establish – and pay for – Electrify America as part of its emissions scandal mea culpa. That, it has turned out, could’ve been the best thing that happened to the automaker in recent years.

Now, with VW predicting EVs will comprise around 20-percent of its global sales by 2025, and around half by 2030, the need for a reliable and convenient charging network is only greater. Counterpart plans at other automakers – many of which make EVs compatible with Electrify America’s chargers – also underscore the opportunity. Currently, Electrify America says it’s on track to have around 800 charging locations – with approximately 3,500 individual chargers – in the US by the end of this year. 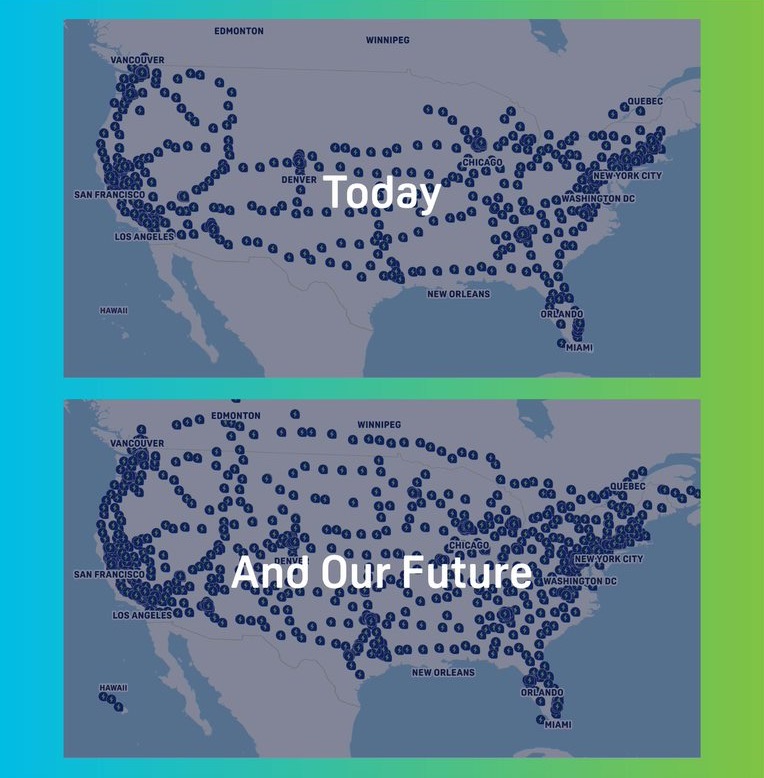 It’ll see the company expand into new states, including Hawaii, North Dakota, South Dakota, West Virginia, Wyoming, and Vermont. That will mean Electrify America’s network is available in 48 US states and the District of Columbia.

A new electric vehicle “charging highway” will be added, joining the current two cross-country and two coastal routes, for those wanting to take their EV across the US. It’ll see Electrify America fill in the charging gap across the upper Midwest. There’ll also be expansion in existing markets, like the California Central and San Joaquin Valleys, along with new cities including Austin, Detroit, and Minneapolis/St. Paul.

Electrify Canada, meanwhile, plans to have more than 100 locations and 500 chargers available over the next 4.5 years. It’ll focus on strategic locations in metro centers, along major highways, and near popular spots. Existing charger availability in British Columbia, Alberta, Ontario, and Quebec will be expanded.

There’ll also be new stations in Saskatchewan, Manitoba, New Brunswick, Nova Scotia, and Prince Edward Island, taking the network to nine provinces. The result, Electrify Canada says, is that “most” EVs will be able to drive from Halifax, Nova Scotia in the east, to Victoria, British Columbia in the west, with charging options along the way.

As for the charger experience, there Electrify America has some new changes coming too. A recently redesigned app was the first part of that, along with support for systems like Plug & Charge which avoid drivers having to scan cards, swipe payment options, or indeed do anything other than plug the charger into their EV. The company is adding canopies at select locations, and fitting enhanced lighting, to try to make the waiting experience at DC fast chargers a little more hospitable.