The Institute of Medicine projected that 3.5 million new health care workers will be needed by 2030. A study published this week in Health Affairs by Harvard Medical School researchers looked into the role immigrant labor plays in care for America’s elderly and disabled. Without immigrants, it would seem, US-born elderly and disabled citizens would have significantly less and lower quality available health care and long-term care sector assistance.

A study on immigrant impact on health provider positions in the USA published this week by Health Affairs was authored by a team lead by Leah Zallman.* In this research, it was found that a significant percentage of the US workforce dedicated to the care and health upkeep of elderly and/or disabled citizens was made up of immigrants, and that any government legislation cutting immigration in the near future would be a bad move.

Using the most recent nationally representative data in the United States, researchers found that 5.2% of the US population is made up of legal, noncitizen immigrants. Legal, noncitizen immigrants in the USA also make up 9% of direct care workers, and naturalized citizens (6.8% of the US population) make up 13.9% of all direct care worker positions. 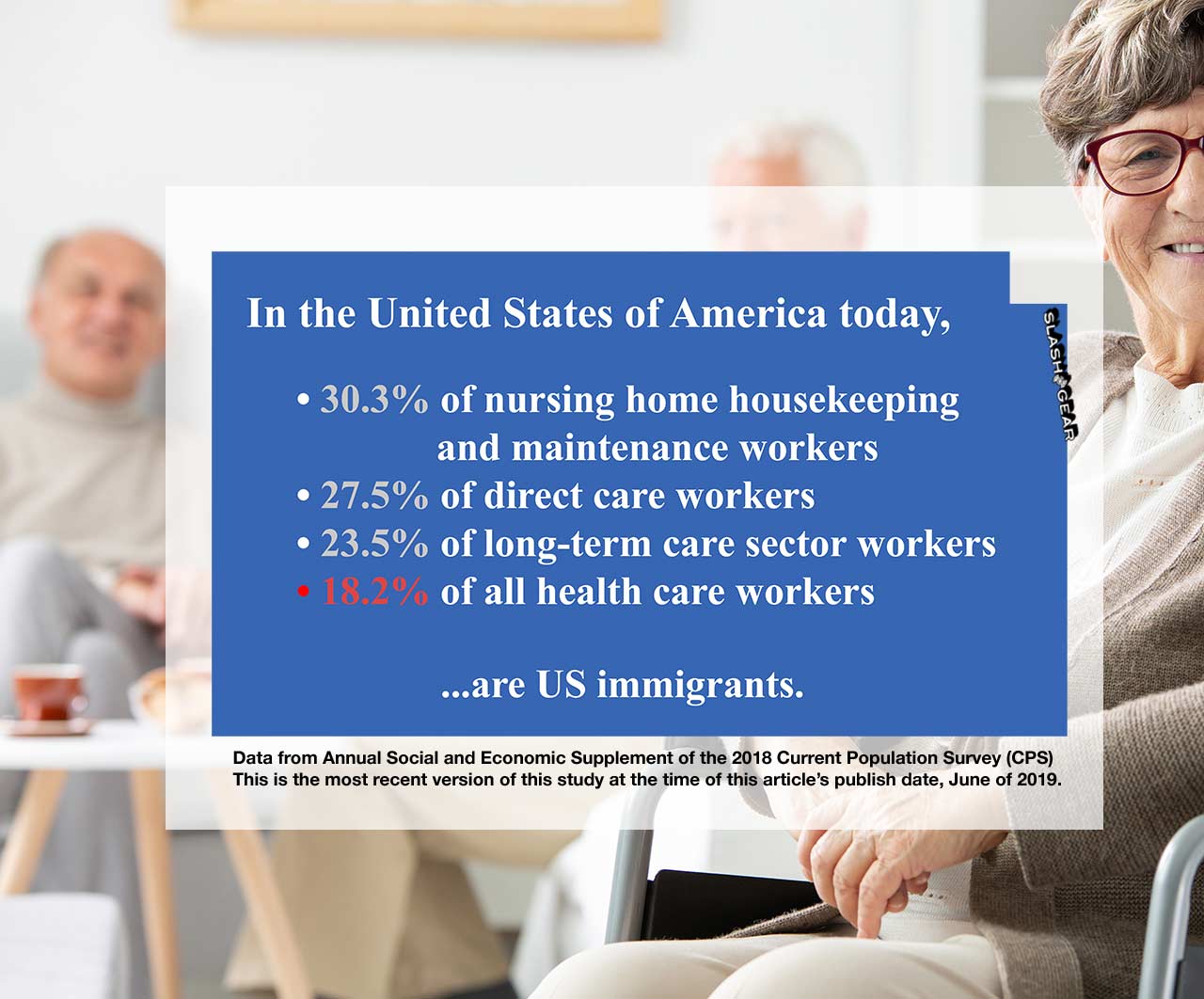 Elderly USA, by the numbers

According to the most recent available study cited by the US government’s Migration Policy website, the Migration Policy Institute (MPI) showed immigrants filling significant percentages of health-care worker occupations. The chart below shows “All Civilian Employed Workers (ages 16 and older) and Health-Care Subset, by Occupational Group and Nativity, 2015” from the U.S. Census Bureau 2015 American Community Survey (ACS).

According to this information from the US Census, approximately one in six workers employed in health-care occupations were foreign born. A 2018 study showed that non-US-born medical graduates account for approximately one in five practicing physicians in the USA. That study showed that that of all US health care professionals, 16.6% were not born in the USA, and 4.6% were not US citizens.

Immigrant health and Medicare: The offset

In the year 2014 there was a deficit of $163-per US-born enrollee in Medicare in the USA. Immigrants taking advantage of Medicare in 2014 had a premium of $1,123 per enrollee, offsetting the deficit created by US-born citizens. 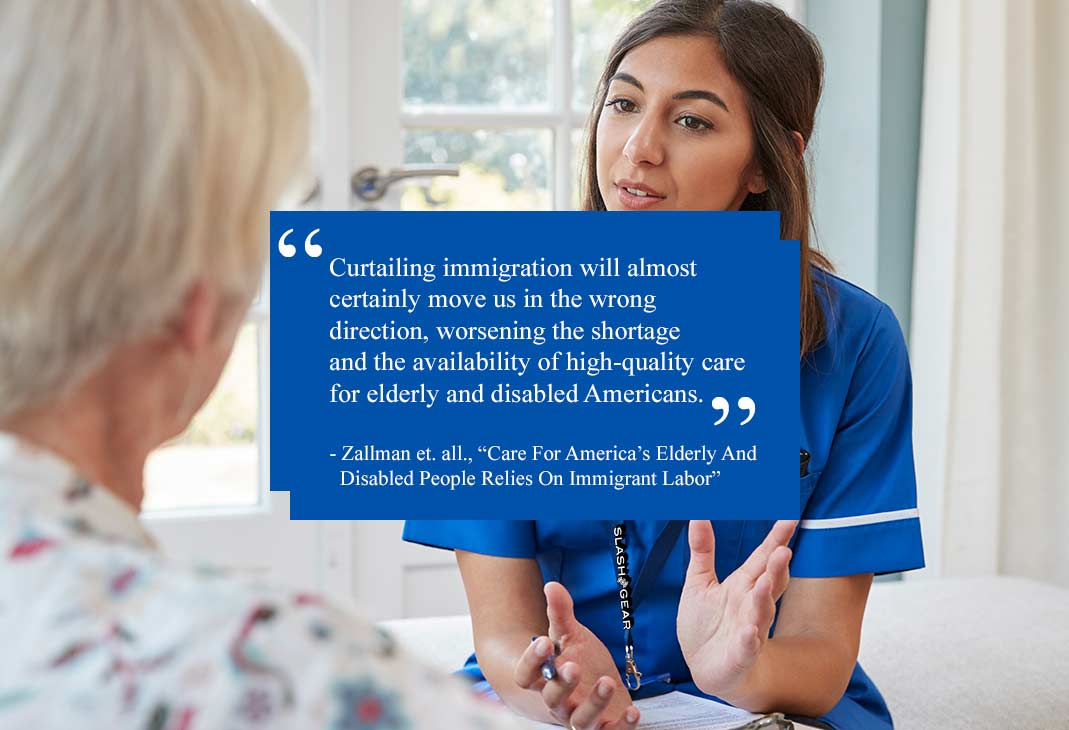 According to the study by Zallman et. all., “curtailing immigration will almost certainly move us in the wrong direction, worsening the shortage and the availability of high-quality care for elderly and disabled Americans.”

“Immigrants not only fill low paying home health jobs but they also subsidize the care of the elderly and disabled through paying more into Medicare and private health insurance than they use,” said Zallman.

“If immigration were cut, the availability of workers would go down and subsidies into Medicare and private health insurance would go down. So, the elderly and disabled and systems that pay for their care would have to face tough choices about whether to move into institutions where they could get care, paying more for the care to draw more people into the labor market, or reducing services provided.”

“In short, if immigration were cut, elderly and disabled individuals would likely face rising costs or decreased care availability or both,” said Zallman. “It would be a disaster.”

In other words, any cutting down of immigration into the United States means less available care for disabled and elderly citizens. When there’s less available care, costs continue to rise, and pretty soon grandma will have to stay at home in her twilight years because Shady Pines costs an arm and a leg. 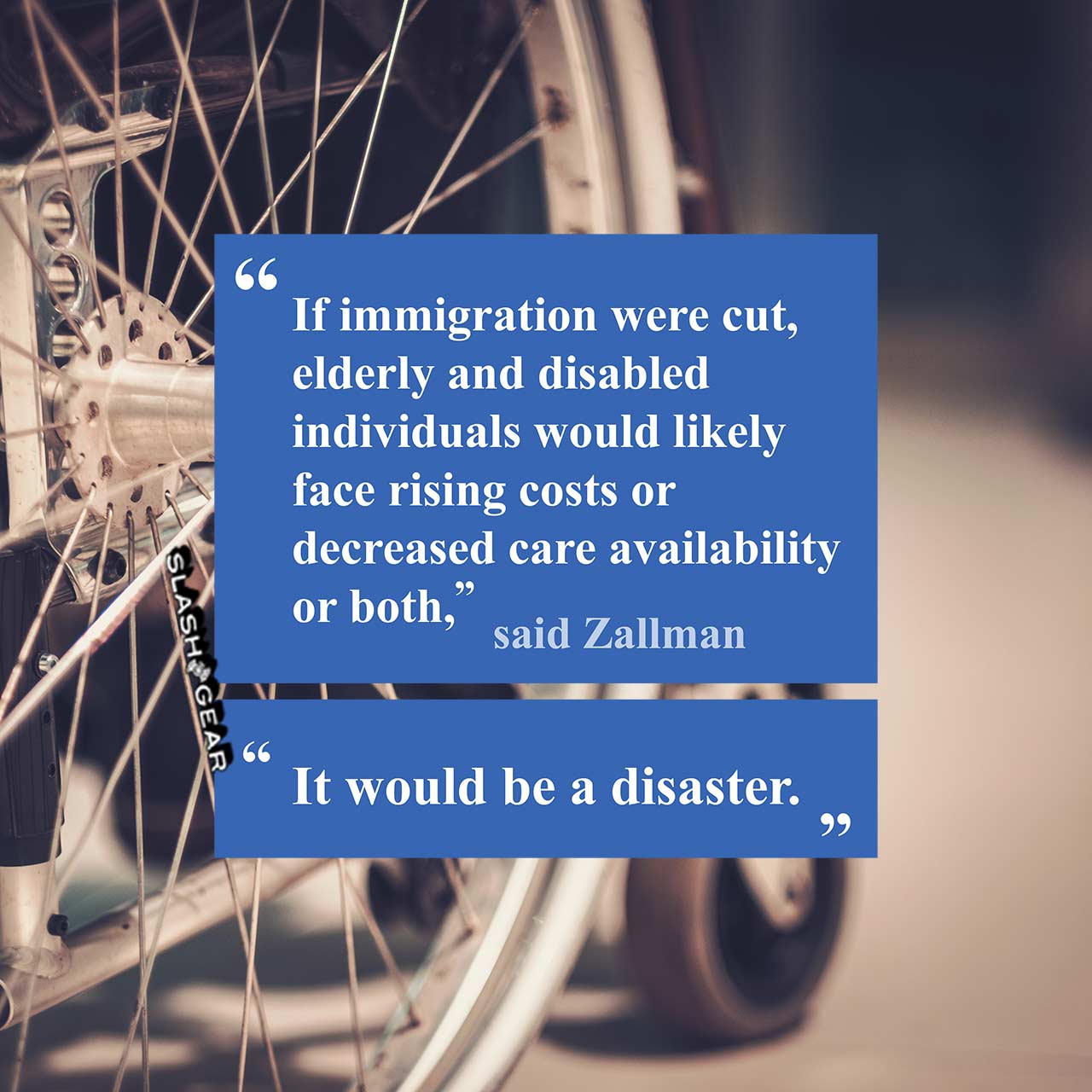 For more information on this subject, see the paper “Care For America’s Elderly And Disabled People Relies On Immigrant Labor”. Published with code DOI:10.1377/hlthaff.2018.05514, this paper was authored by Leah Zallman, Karen E. Finnegan, David U. Himmelstein, Sharon Touw, and Steffie Woolhandler. This paper was published in June 2019, Volume 38, No 6 of Health Affairs.

* Leah Zallman is director of research at the Institute for Community Health, an assistant professor of medicine at Harvard Medical School, and a primary care physician at Cambridge Health Alliance, in Cambridge, Massachusetts. Other professionals that took part in the authorship of this research hailed from Harvard Medical School, the Cambridge Health Alliance, the Institute for Community Health, and Hunter College.