Designers at MIT have created an autonomous robot with the ability to inch forth like an earthworm while it remains impervious to most bashes, drops, and rough terrain. It’s called “Meshworm”, and Sangbae Kim, the Esther and Harold E. Edgerton Assistant Professor of Mechanical Engineering at MIT, notes that it’s a new step towards squeezing through tight spaces and navigating rough terrain in the future. Will we see a robot earthworm plodding around Mars the next time we head out? We shall see!

This little beast uses muscles along the length of its body to move forward with contraction after contraction. The device uses two main muscle groups to move, one of them being circular muscle fibers that wrap around its body, the other being longitudinal muscle fibers that run along its length. The tubular body is made of a heat-sealed sheet of polymer mesh, the mesh made of interlacing polymer fibers.

With this body, the tube is able to stretch and contract, just like a spring. The artificial muscle that makes it all move is made of a nickel-titanium alloy fabricated into a wire. The wire was wound around the mesh tube, and a small battery and circuit board was fitted within the tube as well. The board tells the battery to generate a current that heats the wire at certain segments along the body.

“You can throw it, and it won’t collapse. Most mechanical parts are rigid and fragile at small scale, but the parts in Meshworms are all fibrous and flexible. The muscles are soft, and the body is soft … we’re starting to show some body-morphing capability.” – Sangbae Kim 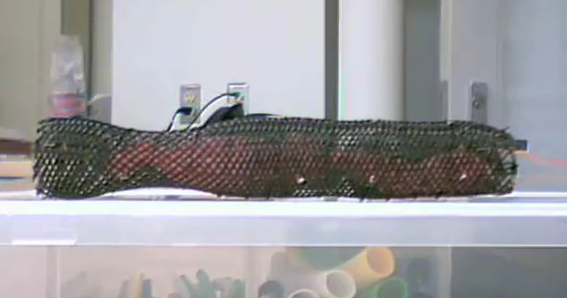 Kellar Autumn, professor of biology at Lewis and Clark College, studies the biomechanics of animal motion in designing soft robotics and also had a bit to say about the project and future projects using similar technologies. Specifically endoscopes, implants, and prosthetics are on the docket here with Autumn.

“Even though the robot’s body is much simpler than a real worm — it has only a few segments — it appears to have quite impressive performance. I predict that in the next decade we will see shape-changing artificial muscles in many products, such as mobile phones, portable computers and automobiles.” – Autumn

Researchers at MIT, Harvard University and Seoul National University are currently at work on this project as we speak. The U.S. Defense Advanced Research Projects Agency supported this research as well.