The Kepler mission initiated to find habitable Earth-like planets near our own has turned up another candidate for places we might visit in the future: GJ 667Cc. This planet has an orbital period of about 28 days regularly and has a mass that’s at least 4.5 larger than Earth. This planet is neither too hot nor too cold for liquid water to exist on the surface, and it sits aside two or three additional planets that may well be similar enough to also be Earth candidates. This newest discovery was made by astronomers from UC Santa Cruz Steven Vogt and Eugenio Rivera, lead by Guillem Anglada-Escudé and Paul Butler of the Carnegie Institution for Science.

The host star in this system is called GJ 667C and is an M-class dwarf star. Two more stars sit in the same system and are a pair of orange K dwarfs. This area was not expected to be the best place for a habitable planet to be out of all those being concentrated on in this larger Kepler mission, but turned out surprisingly to be just what those watching were looking for. Vogt, a professor of astronomy and astrophysics at UCSC, noted:

“This was expected to be a rather unlikely star to host planets. Yet there they are, around a very nearby, metal-poor example of the most common type of star in our galaxy. The detection of this planet, this nearby and this soon, implies that our galaxy must be teeming with billions of potentially habitable rocky planets.”- Vogt 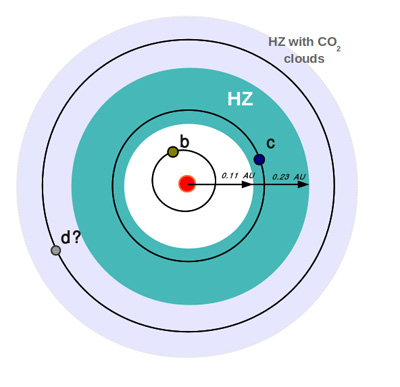 “This planet is the new best candidate to support liquid water and, perhaps, life as we know it.” – Anglada-Escudé

Wouldn’t it be lovely to go live on a new planet? We won’t be getting there in our lifetimes, sadly enough – unless Zefram Cochrane hurries up and gets born so he can invite warp speed. Come on nerds, get to reproducin!

[via University of California Santa Cruz]