E-whiskers could give robots cat-like supersenses

Artificial whiskers made of incredibly thin carbon nanotubes could give robots cat-like sensing abilities and allow hair-thin distributed sensors to track weather patterns and more, researchers at Berkeley claim. The new nanotechnology can differentiate as little pressure as a single Pascal – which the team at Berkeley Lab and University of California Berkeley say is about the same as a dollar bill resting on a table – making them around ten times as sensitive as existing sensors.

The artificial whiskers combine a carbon nanotube paste – spread out to make a highly flexible conductive network matrix – with a thin film of silver nanoparticles. They give the matrix a high degree of sensitivity to mechanical strain. 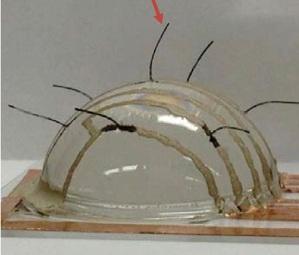 To make them actually whisker-like, meanwhile, the researchers apply the composite film to elastic fibers. That can be via painting or even printing processes.

As a proof of concept as to what the e-whiskers could be used for, the Berkeley group came up with a seven-whisker array that can map wind flow in three-dimensions. However, other possible uses could include tracking nearby objects and even micromovements by wearables, such as pulse and heartrate by fitness bands and smartwatches.

Of course, another application could be giving robots the same sort of senses that animals like cats have, tracking tiny changes in the environment around them. With DARPA involved in the funding of the project, we could end up seeing technology based on the research show up in future robotics project from the US government agency.