While it might resemble an automatic blood pressure monitor for those with huge arms, or a pedestal-mounted personal Stargate, you’re actually looking at James Dyson’s latest rethink to domestic appliances.  The Dyson Air Multiplier is the UK engineer’s attempt to replace the humble fan, dropping the blades into the base section and re-routing the air through the ring.

While that may sound like a gimmick, it does mean that there are no finger-hungry moving parts destined to slice up your children.  The Air Multiplier should be quieter, too, since there’s no air-chopping that can cause “buffeting” in traditional fans.

Unfortunately the demo model Engadget were wafted with actually sounded more like a Dyson vacuum cleaner, and the Air Multiplier doesn’t come cheap.  Dyson are asking $299.99 for the 10-inch model and $329.99 for the 12-inch; at prices like that, this could end up going the same way as the Dyson CR01/CR02 contrarotating washing machine. 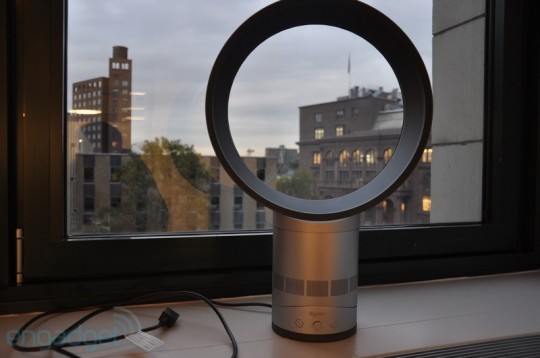 SAY GOODBYE TO THE BLADE

James Dyson introduces the bladeless fan. No blades. No buffeting.

James Dyson, who for the past 30 years has continuously revolutionized the vacuum cleaner his attention to addressing the everyday fan. As a result, he has designed the Dyson Air MultiplierTM fan, which has no blades, but instead uses a unique technology to multiply air 15 industry through unprecedented advancements in airflow engineering, has turned times, expelling 119 gallons of smooth and uninterrupted air every second.

Until today, conventional electric fans have gone largely unchanged. The fundamental problem has remained the same for more than 125 years; the blades chop the air creating an uneven airflow and unpleasant buffeting.

“We realised that this inducement, or amplification, effect could be further enhanced by passing airflow over a ramp,” says Dyson. “And of course this was the point where the idea of a bladeless fan became a real possibility. Here was a way to create turbulent-free air and finally do away with blades.”

How it works: inducement and entrainment

Air is drawn into the base of the machine. The air is forced up into the loop amplifier and accelerated through the 1.3mm annular aperture, creating a jet of air that hugs the airfoil- shaped ramp. While exiting the loop amplifier, the jet pulls air from behind the fan into the airflow (inducement). At the same time, the surrounding air from the front and sides of the machine are forced into the air stream (entrainment), amplifying it 15 times. The result is a constant uninterrupted flow of cooling air.

The Dyson Air MultiplierTMfan is powered by an energy efficient brushless motor and air speed can be precisely adjusted with a dimmer switch. Conventional fans are wired to run at just two or three settings.

No blades mean no need for a grille and it’s safe and simple to clean.

And because its motor is at its base, the Dyson Air MultiplierTM fan can be tilted with a touch, unlike a conventional top-heavy fan, which needs to be positioned with two hands and can topple easily.

The Dyson Air MultiplierTM fan is available in two 10-inch models: blue & iron and silver & white with an MSRP of $299.99. A 12-inch model is available in silver & iron with an MSRP of $329.99. All three machines are available at The Conran Shop (NY), Luminaire (Chicago/Miami) and Twentieth (LA). To learn more about the Dyson Air MultiplierTM fan visit www.dyson.com.