DURUS Learns to Walk like a Human, Prefers Adidas

SRI is one of the two teams that DARPA funded to make a robot able to walk much more efficiently tan other bots out there, specifically DARPA wants 20x more efficient locomotion. DURUS has come very close to its goal of being 20x more efficient than ATLAS (another bipedal robot). With a more human like gait, DURUS has something called a cost of transport of 1.5 thanks to fancy new hardware, software, and gait control. 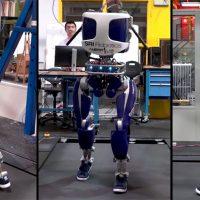 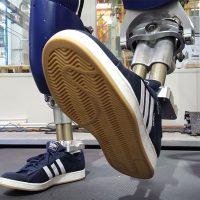 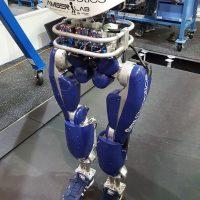 To celebrate his improved walk, DURUS also got a new set of shoes in the form of fancy blue Adidas. DURUS now has what the scientists on the team call human-like heel-toe contacts. Basically, DURUS looks like a person when it walks. You can watch him amble around in the video at the bottom.

One key to the innovation that DURUS shows is that the processing power that it needs to control its gait and all other tasks is integrated into the robot. That means unlike other robots out there that can walk in a manner similar to humans, DURUS needs no tethered umbilical for power or processing. In the video DURUS is tethered, but that’s just for safety not for power says the researchers. The bot has large ankle springs that help store and release energy with a step and feet designed to roll smoothly off the ground.

The ability to display human-like walking on a humanoid robot in the context of natural feet behavior is only an indication of what is possible with this framework. We can plan in much more advanced behaviors—one example is running. But going beyond that, we will be able to handle unknown and rough terrain, stairs, and other complex scenarios. This is all future work, and will be an essential component in bringing robots into the wild,” said Professor Aaron Ames.