Dropbox has refreshed its cloud storage software to support multiple accounts, allowing Dropbox for Business users to also access their personal documents from a single app. Not only can users of the company’s mobile software switch between files stored in each different account, Dropbox says, but actually browse the combined contents of each cloud store simultaneously, in a single Files tab list.

According to Dropbox, the app is “smart” about how it handles uploads, even when there are two accounts registered to one app. Camera Upload shots sent using the Dropbox auto-upload feature, for instance, automatically get pushed to the personal Photos album, and aren’t shared by default.

Even when the two accounts are connected, each will still have its own settings and passwords, and there won’t be automatic synchronization between the two. On the desktop, there’ll be two local folders rather than just one, each linked individually to the business or personal account. 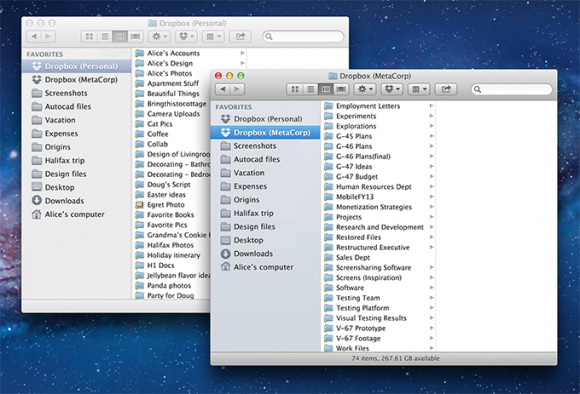 The multiple account support isn’t the only addition to Dropbox for Business today. The update also includes remote-wipe support, so that system admins can clear a Dropbox folder from computers, phones, and tablets from a afar, should the device be lost or the user leave the company.

There’s also account transfer support, where the files from a de-provisioned user can be instantly shifted across to a different Dropbox account. Dropbox is also sharing its audit logs with admins, so that they have better visibility over where data is going.

The new features will be rolling out to users later this month, though they’re only for Dropbox for Business customers; unfortunately, there’s still no easy way to log into two personal Dropbox accounts simultaneously from a single app.