I think it’s fair to say that if you make one of these DIY virtual reality headsets, your kids will definitely be the coolest in the playground.  The handiwork of Recombu’s Andrew Lim, the cardboard headset takes advantage of an accelerometer-packing HTC Magic, an old pair of lab goggles and some boyish enthusiasm to create a head-tracking view of the world. 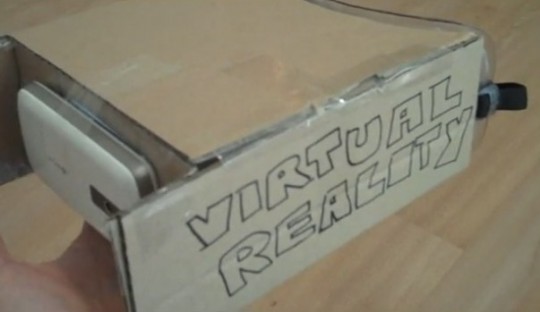 You can use the headset to pan around in the compass Street View mode of Google Maps, or get more interesting and use one of the augmented reality apps available for Android – such as Layar – to overlay information over a real-time view of what the Magic’s camera is seeing.  You’ll certainly be distinctive as you walk down the street.

Of course, the main problem you’ll have is controlling the Magic, what with it being sellotaped into the box, but some sort of snug-fitting case into which the Android smartphone could slide would address that.  We can’t quite decide whether this is genius or insanity, but we’re not going to let that stop us making our own.