Tired of waiting for Google Glasses and don’t mind some sartorial embarrassment in return for cheap augmented reality? A DIY option has been cooked up by Matt Kwan, running Android just like Google’s tech-specs are expected to, but with an altogether more MacGyver approach: think uber-geek baseball cap more than anything else.

Kwan’s system relies on bouncing a reflection of his HTC Desire Z‘s screen down to some specially angled lenses, through which he can see a regular view ahead. The smartphone is mounted on a triangular wedge of polystyrene, with an arrangement of mirrors, fresnel lenses and some of the mirrored film from an iPhone screen protector – that looks like a regular mirror when the display is off, but allows light through when it’s on – to create a virtual display the equivalent of half a meter away.

The main app used at present is Wikitude, with a piece of duct tape over the phone’s camera so as to black out its video feed of the world and thus simply float the icons over the real-world view. The phone’s digital compass keeps the UI in the right place, though of course there’s no way of actually controlling the software. The whole system is said to be quite heavy – not least because the Desire Z’s keyboard adds bulk – and not entirely comfortable.

Overall, then, this is an interesting proof of concept but it’s not something we could see most people sporting as they wander around. The geek-gimmick objections are going to be something Google will face when – or indeed if – it eventually commercially launches its own AR glasses; after all, not everyone is quite so willing to embarrass themselves. 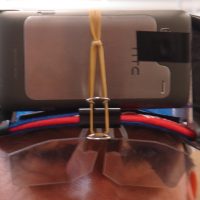 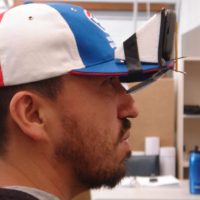 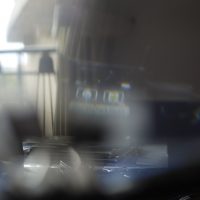