Next-gen gaming won’t be truly immersive until it blows, Disney Research believes, and it has the Kinect accessory to fix that tactile omission. Aireal uses a focused blast of air, fired from a compact cannon designed to sit alongside a sensor-bar like Kinect, to make action on the screen feel all the more realistic; shown off at SIGGRAPH in July, the cannon can track a player around and synchronize with the gameplay.

In the brief demo video shared on Aireal so far – you can see if from the 0:44 point – a gamer plays a goalkeeper simulator, with balls fired toward them on-screen. The challenge appears to be knocking as many of the balls away, using physical movements tracked by a Kinect; the Aireal sits next to it, firing puffs of air at the player to recreate the sensation of objects impacting.

Disney Research describes the system as creating “interactive tactile experiences in free air”, and it relies on the inherent stability and range of a vortex of air. By spinning the flow of air around the central axis, the blast can be made far more precise and reach further into the room.

The developers – Rajinder Sodhi of the University of Illinois, along with Matthew Glisson and Ivan Poupyrev of Disney Research Pittsburgh – don’t say exactly what the range of the Aireal cannon actually is, only “large distances.” The system is “scalable and inexpensive” they claim, though would presumably need to be made more compact if it wanted to gain living room acceptance. 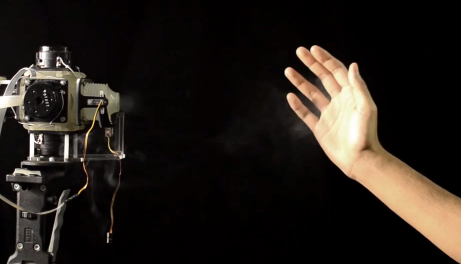 However, you could easily imagine Microsoft integrating Aireal into a future version of the Kinect sensor bar, which was updated for the Xbox One revealed earlier this week. The new Kinect has more accurate motion-tracking – now capable of identifying not only skeletal movement, but musculature and force, and even measuring heart-rate – as well as advanced microphones for voice control of the next-gen console.

So far, though, attempts to make gaming more immersive have tended to treat the sense of touch with relatively broad strokes. At most, there’s some sort of haptic feedback from vibration of the gamepad; the Xbox One controllers, for instance, have tunable vibration to suit the on-screen action, but harness systems and similar to spread the sensation across the player’s body have generally met with resistance. 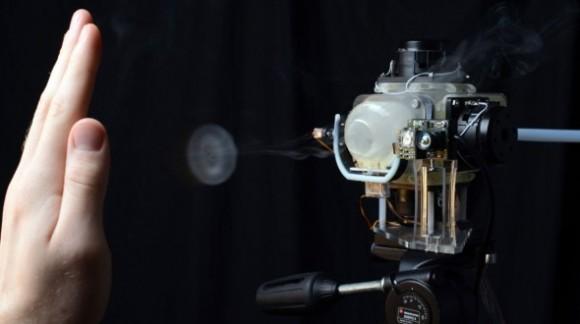 Disney Research’s approach – though perhaps less targeted than strapping vibration motors across your torso – does away with the issues of clumsy bodywear, and it could also be used to good effect in media types other than gaming, such as movies and TV shows. Whether that will make it an acquisition target for one of the big game companies remains to be seen.