You just opened Disney Plus (or Disney+ if you prefer) for the first time and you’re feeling overwhelmed. Or you’ve been using Disney Plus for a while now, and you wonder if there’s anything you’ve missed. If you’re looking for a “what to watch on Disney Plus” sort of article, you can find that on SlashGear too – but THIS article is all about getting started out right.

If you’re reading this feature on Disney Plus on launch day, November 12, 2019, you’ve probably come across some broken bits. Disney experienced massive loads of users signing on and utilizing their video servers very quickly – it was no shock to find that the first several hours of service weren’t blemish-free. 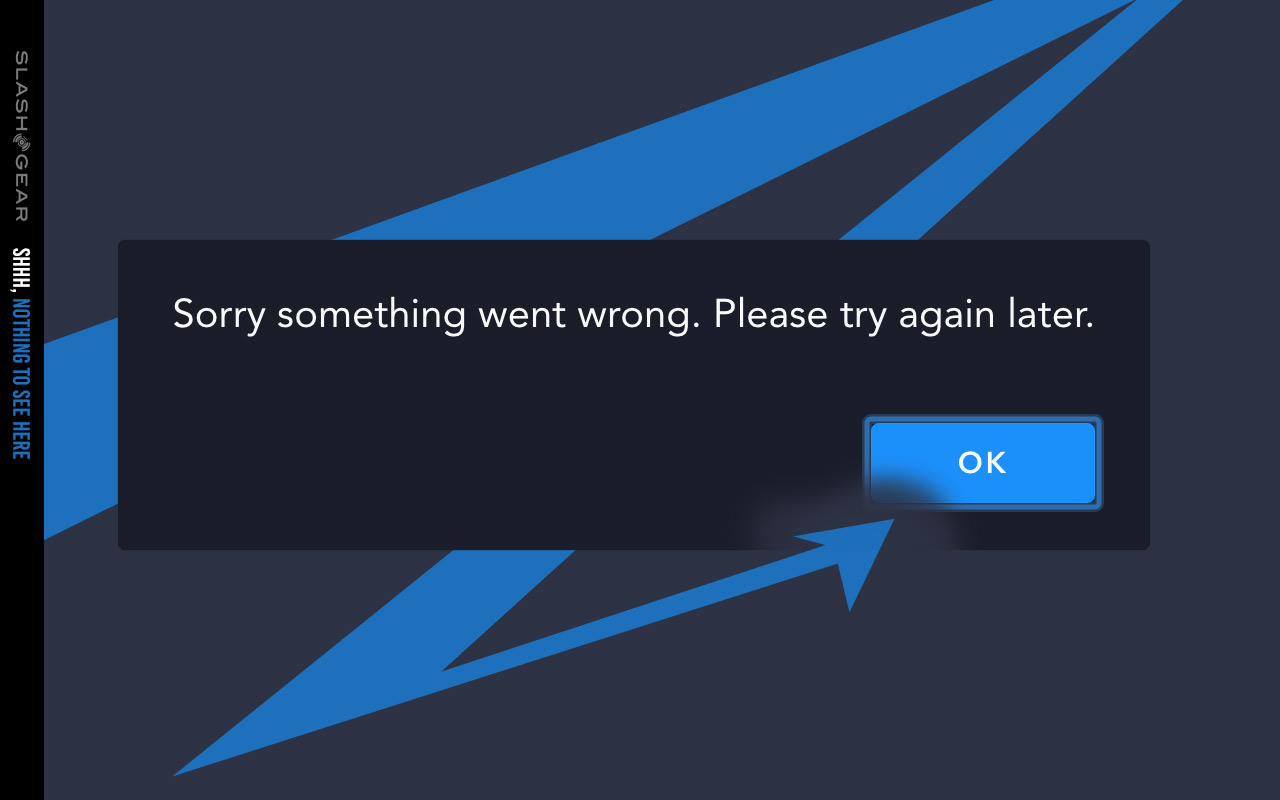 Starting in the morning of November 12, 2019, users experienced “Server Unavailable” errors. They experienced the error “Sorry something went wrong. Please try again.” They experienced all sorts of nonsense. We’re crossing fingers that this down-time doesn’t count toward the total 7-day free trial, but we wouldn’t bet on it!

RT if this is your favorite #DisneyPlus show or movie so far! LIKE if you hate! pic.twitter.com/HwT6ZEKTRf

If you own a Samsung smart TV, you might need to do a little searching before you find the app for Disney Plus. To find this app, head to your Samsung TV’s App Store, then move down the store’s menu to find “Group Content.” In Group Content, find “Content Previews.” Inside Content Previews should be the Disney Plus app – otherwise you’re on your own!

For Xbox One, the Microsoft Store link to Disney Plus is coded according to your current point of access. If you live outside the USA, you may be prompted to switch to the correct URL. Normally I’d just link to the non-country-specific URL, but for the Microsoft Store, such a thing does not exist!

The Roku link here shows the Disney Plus channel up and active right out the gate. You can find the PS4 app at the PlsyStation Store right now, released the morning of November 12, 2019. PlayStation users might also want to search in their app store for “Disney+” – it does not appear that searching for “Disney Plus” will work (for the moment) – strict branding!

The Android app on Google Play is compatible with the vast majority of Android devices right now. Disney Plus requires Android 5.0 and up. You SHOULD be able to find this app via Android TV by searching “Disney+” too – or just find your device from the drop-down menu when you tap “install” when accessing Google Play from a desktop web browser.

You can download the app from the Apple App Store for iPhone, iPad, and Apple TV. On November 12, 2019, this app was the “#1 in Entertainment” app for the app store overall.

7. How many movies and shows are on Disney Plus?

At the point at which Disney Plus was launched, on November 12, 2019, there are 705 Movies in the Disney Plus webpage code – we’ve still got to do some work on verifying the amount of movies that are currently available. The amount of TV shows is far smaller at around 179. UPDATE: Some fine work was done by the folks at the Disney Plus subReddit where they’ve made a comprehensive spreadsheet of ALL the content.

When you tap a movie or show, make sure you seek out the “Extras” tab. You’ll find other tabs like “Episodes”, “Suggested”, and “Details” as well. Extras can be trailers for the movie or show itself, documentary features, cut scenes, and/or post-credit clips. 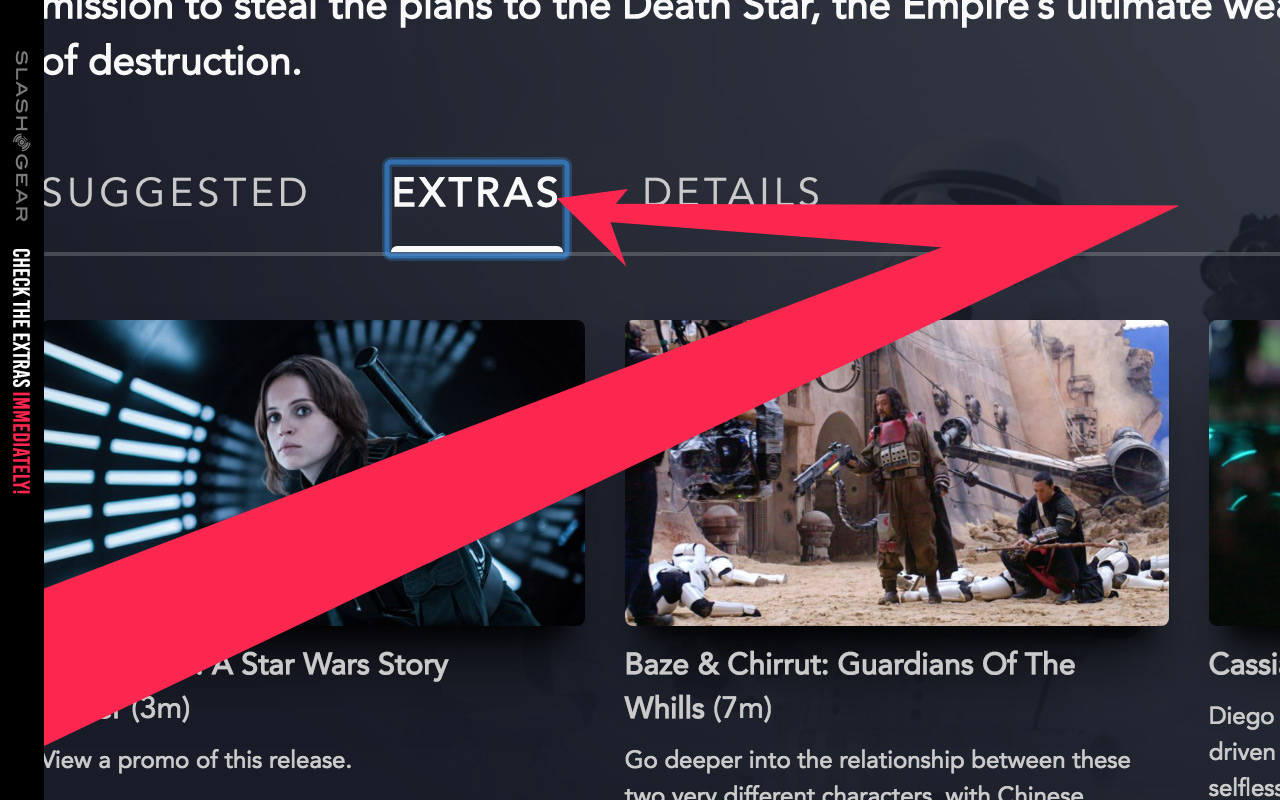 At launch, the versions of the Star Wars movies available on Disney Plus are different from any versions that’ve come before – just a TINY bit. They’re very similar to what you’d get if you’d purchased the then-most-recent Blu-Ray versions of each film. They do seem to have a newly-optimized color pass, but everything else seems to roll the same as blu-ray.

This means we get Jabba in A New Hope – the grungy, best-of-several version. This means we get the Special Edition Jabba’s Palace song and dance sequence. This means Han Shot Fi…not first, but basically at the same moment as Greedo. Sorta like the last digital release where they both shot first.

As of November 12, 2019, launch day in the USA, some show series are out of order and/or have missing episodes. The series Phineas and Ferb’s episode order does not mesh with the original order and/or the order listed on sources like IMDB. According to fans, this is also true of other series like Ducktales (2017) and Spider-Man (1994). 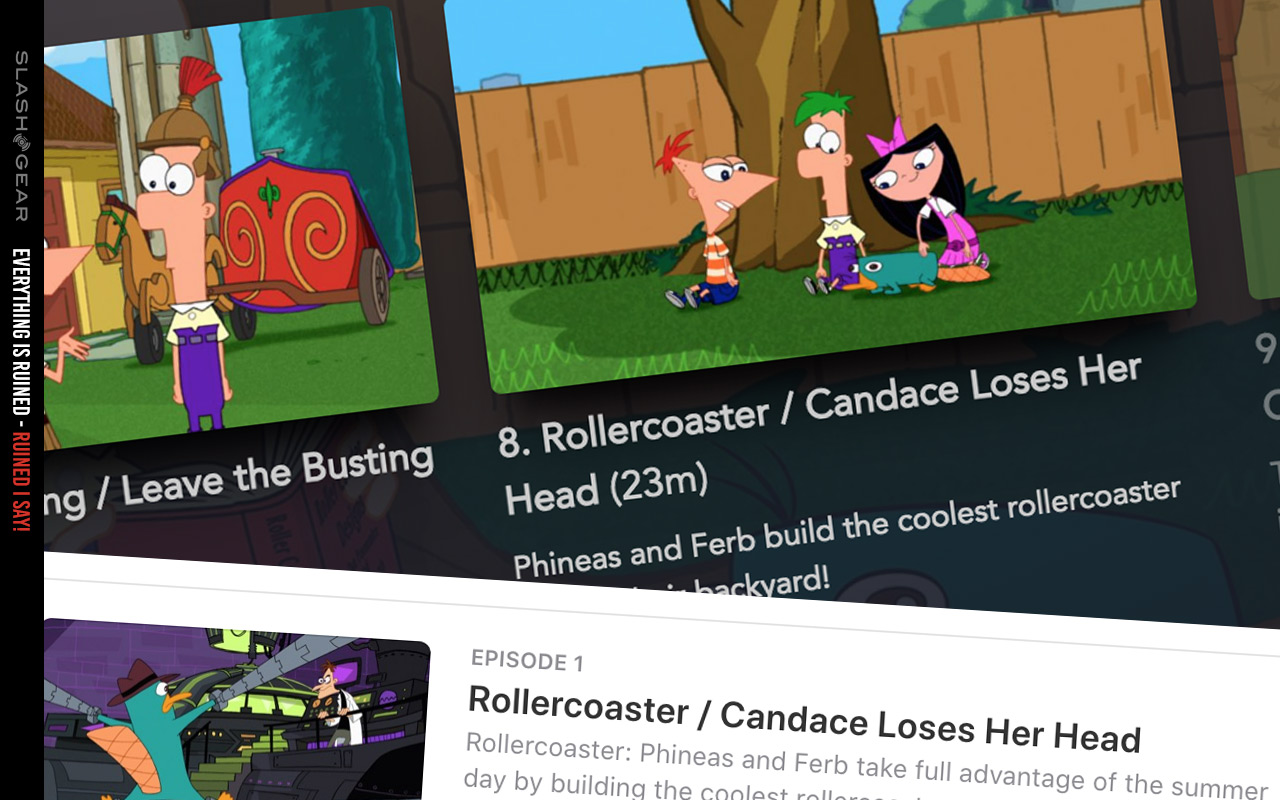 Gooftroop, Chip n Dale Rescue Rangers, and The Simpsons all have cropping issues. As if some of their episodes (or all of their episodes) weren’t meshing with the aspect ratio of the rest of the service, so they did a “fix all” solution that resulted in sub-optimal final product.

If you happen to be browsing the website and look at the site source code, you’ll find the following hidden message:

Sorta neat – and you’ll find a bunch of references to bamgrid, dssott, onetrust, and other interesting ad-or-tracking-related (or adjacent) bits. If you wish to see the full Privacy Policy of the system, head over to The Walt Disney Company Privacy Policy. That covers basically every Disney-related website and service. 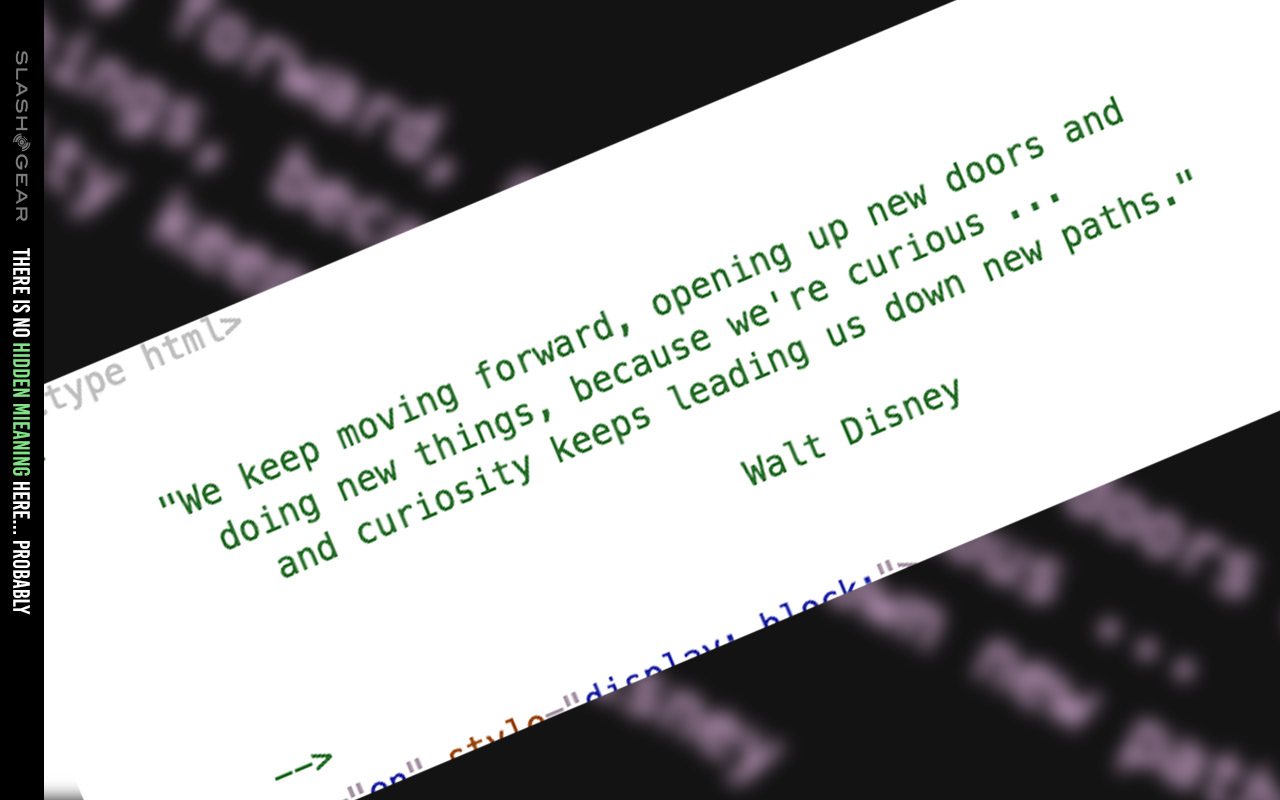 2. How to turn off automatic trailers

At the point at which Disney Plus launched, streaming services of several sorts still used the automatic-play content trailer system. This meant that people would move through different shows and movies and, whenever they stopped to read a description, a trailer for said content would automatically begin to play – it was awful.

Netflix did not allow this system to be switched off at the point at which Disney Plus was launched, but Disney DID. While it’s unfortunate that this system is still opt-out, it’s a good sign that Disney’s willing to allow people to move through content without constantly being blasted by trailers – so thank you, Disney!

To switch this system off, tap your Profile image, Edit Profile, and tap the switch for Background Video. Here you can also switch off Autoplay (for video series and binge-watching), if you do so wish. 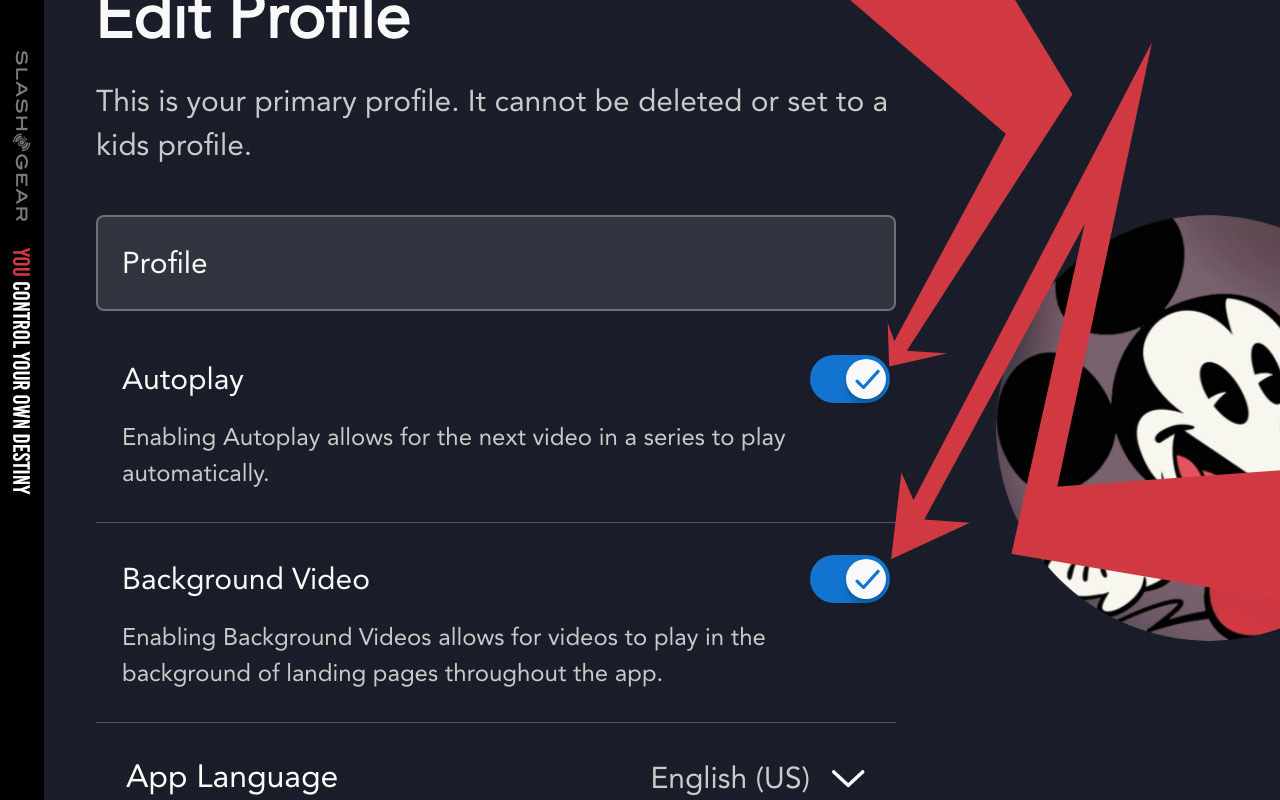 When will each Disney Plus original series release new episodes? According to this archived page from The Walt Disney Company dot com, new streaming service originals from Disney Plus will appear on Friday at 12:01 AM Pacific Time. That’s harsh!

“Beginning November 15, most new episodes of each series will premiere on Fridays at 12:01 a.m. PT.” That means 1 minute after midnight, Pacific Time. That’s also Friday at 2:01 AM Central Time, Friday 3:01 AM Eastern Time. So from this point on I’ll probably be very, very sleepy on Friday mornings – as will all the Star Wars fans in your office!