Coming to T-Mobile as their first 4G tablet, Dell is set to launch its foray into the 7-inch tablet market with the Dell Streak 7. Packed with NVIDIA’s Tegra 2 dual core processor and a 7-inch 800×480 Gorilla Glass touch screen. Is it poised to take on the Tab? Check out the full review.

The hardware design for the Streak 7 is vastly improved from the Streak 5. I was one of Dell’s harshest critics of the Streak 5 as the back battery panel came to easily detached from the device.

Like the Tab the back of the Streak 7 is a solid non-removable panel. The back also contains a small diamond texture design similar to the texture feel Dell has been putting on more of their consumer notebooks. 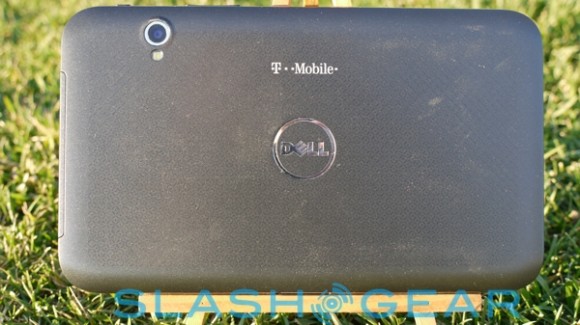 One of the things that stands out the most with the design of the hardware is that it appears to be designed with landscape mode in mind as the major way the product will be used.   From the camera positions, to the power and volume buttons and most noticeably the orientation of the side buttons. 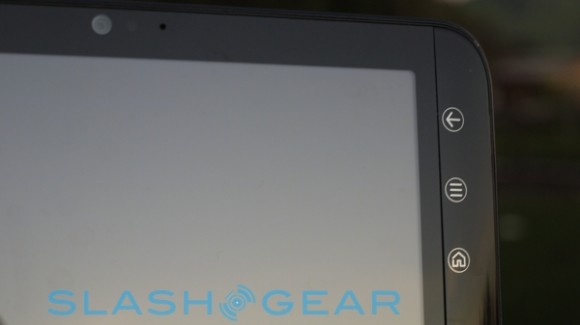 The design of the Streak 7 is much like the design of the Streak 5 where the sides of the device, if you are holding it landscape, have a slight curve. On the top of the device there are only two buttons, off and one and volume up and down. The Home, Menu and Back buttons are on the front. One thing that is noticeable is the absence of the search button so commonly found on other Android hardware. This could mean Dell intends to make the move to Honeycomb quickly where search is integrated more into the core operating system, or it could just frustrate users.

There are two speakers on the Streak 7 on both ends of the device, which gives it a true stereo experience with applications that use audio. In comparison the Tab has two speakers but they are both at the bottom of the device. 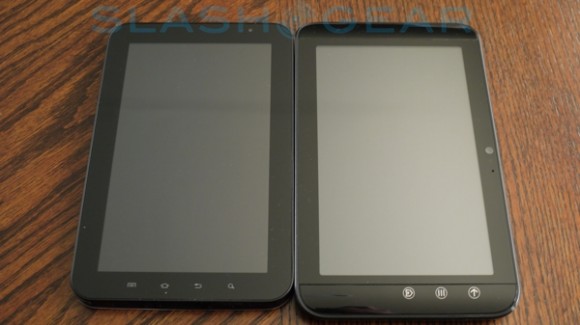 The Streak 7 comes loaded Android version 2.2. The only additional software Dell has pre-loaded on to the device is their own Dell Stage widgets which consist of a contacts, email, gallery, home, music, social and web widgets.

I did find the Streak 7 to be a bit more snappy than the Tab. Going in and out of applications, browsing apps from the menu and even browsing the web. Overall I found the speed performance to be better than the Tab.

Further from a performance standpoint the Streak scored a 1918 on Quadrant where the Tab scored a 980.

NVIDIA’s Tegra 2 is a dual core processor and Android version 2.2 is multi-threaded, however there is room for improvement.  Along those lines not all applications are multi-threaded as well. So the full power of the Streak 7 and the Tegra will not be unleashed until either Gingerbread or Honeycomb are made available on the Streak 7.

The Streak 7 is T-Mobile’s first 4G tablet.   In many areas of the Bay Area where I live I got strong 4G signals and tested speeds in the 2.5 to 3.5 mb range of download speed. In full 4G areas web pages loaded quickly and more importantly when I was out and about using things like maps or other location based services applications.

Since NVIDIA’s Tegra 2 processor is capable of 1080p capture I was excited to test the video capabilities for both playback and capture. For 1080p video playback the Streak 7 performed admirably. The video played back flawlessly without skipping and with smooth frames. Capture however was a different story all together as 720P was the highest resolution option capable to capture video.

Graphics and games looked incredibly fantastic.   I expected this as Tegra 2 coming from NVIDIA with their deep graphics expertise.   I was able to play a few pre-release Tegra optimized games that NVIDIA provided me.   One was a Tegra optimized version of Dungeon Defenders and the other was Galaxy On Fire 2.   Games in particular shined on the Streak 7 and when it came to fluid and rich graphical gameplay it was much better than the Tab.

Here are some photos I took of my goats with the camera. 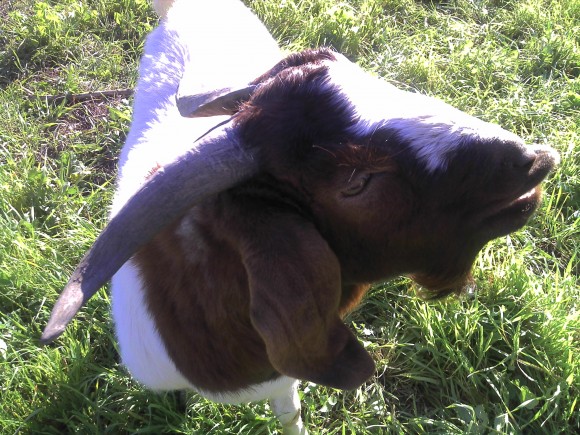 The battery life on the Streak 7 has to be my biggest complaint. Over the weekend I took it with me on a day trip to Berkeley and after a full nights charge it was dead by 5 PM. The next day faired a little better but just barely made it through a day.

The culprit is the Streak 7 only has a 2780 mAh battery while the Tab has a 4000 mAh battery. The bottom line is expect more frequent charging if you plan on heavy usage.

Having used the Tab for over a month and now after using the Streak for five days, the performance advantages of the Streak 7 give it the edge in my opinion.   The Streak 7 will perform and in some cases outperform other tablets in the 7′ inch range with its capabilities as a rich multimedia device largely thanks to NVIDIA’s Tegra 2 super chip.

The battery life is my biggest complaint with the Streak 7 and in terms of battery life the Tab is a better option.

I want to see how the Streak 7 performs when either Gingerbread or Honeycomb become available as an update.   From things like multi-threaded support, more tablet centric OS and speed / performance gains all things that will add value to not only tablets in general but the Streak 7 as well.