Delete Revolut right now, because of this guy

This is the way startups work, you’ll hear them say, you sign up and expect to work this way. Except when you’re a company that suggests you “believe in power of people” and “love the game” – you’re not making a change in the world, you’re simply moving the suffering from one group of people to another, and profiting in the meantime. That’s what it would very much appear is happening with the working culture over at Revolut – and they’re not alone.

First – if you’re not concerned with the way workers are treated by bosses in any work environment, by all means, have no worries! If you ARE concerned with soul-crushing work environments and their continued existence, please continue to read on! And keep in mind, just because this one man is at the center of this mess, it does not mean that he’s the only cause.

There’s an app and ecosystem called Revolut, and it works pretty well! It works pretty well because the people who run the app expect that their staff will work well beyond compensation. One big early report on “the human cost” of the Revolut model was posted in Wired in February of this year. That report includes word from Stevie Buckley, co-founder of Honest Work and startups HR advisor.

“Primarily, it starts with their CEO Nikolay being very vocal about their mentality, that if you do a 9-5 it won’t work out,” said Buckley. “Everything he has said is a recipe for burnout.”

A message from the CEO of the company on the company’s Slack channel was leaked by an employee. This message is captured and posted above. In the message, he mentions KPIs (key performance indicators) several times, noting that these supersede all other elements or concerns.

“If your team does not hit KPIs, most likely, your bonus will be zero even if you are a great contributor. So push them!” Storonsky continued, “I noticed that several product owners / team leaders are significantly below targets and still do not work on weekends to catch up. There is a simple rule in place: POs and team members with performance rating “significantly below expectations” will be fired without any negotiations after the review.”

Yeah, no. And as a bit of a bonus, if at this point you’ve read this article and want to close your account with Revolut, you’re going to have to put in more effort than you did to open said account. They’ll begin by suggesting “we don’t advise closing your Revolut account as it can take a bit of time to set up a new account with the same mobile number.”

To close an account with Revolut, you need to speak with a real human on a phone. You need to make sure all your transactions are complete, you need to withdraw all funds from all “currency pockets” in the app, and you’ll be issued a threat from Revolut that your Revolut cards linked to the account will be terminated and you won’t be able to link them to another account or use them again. 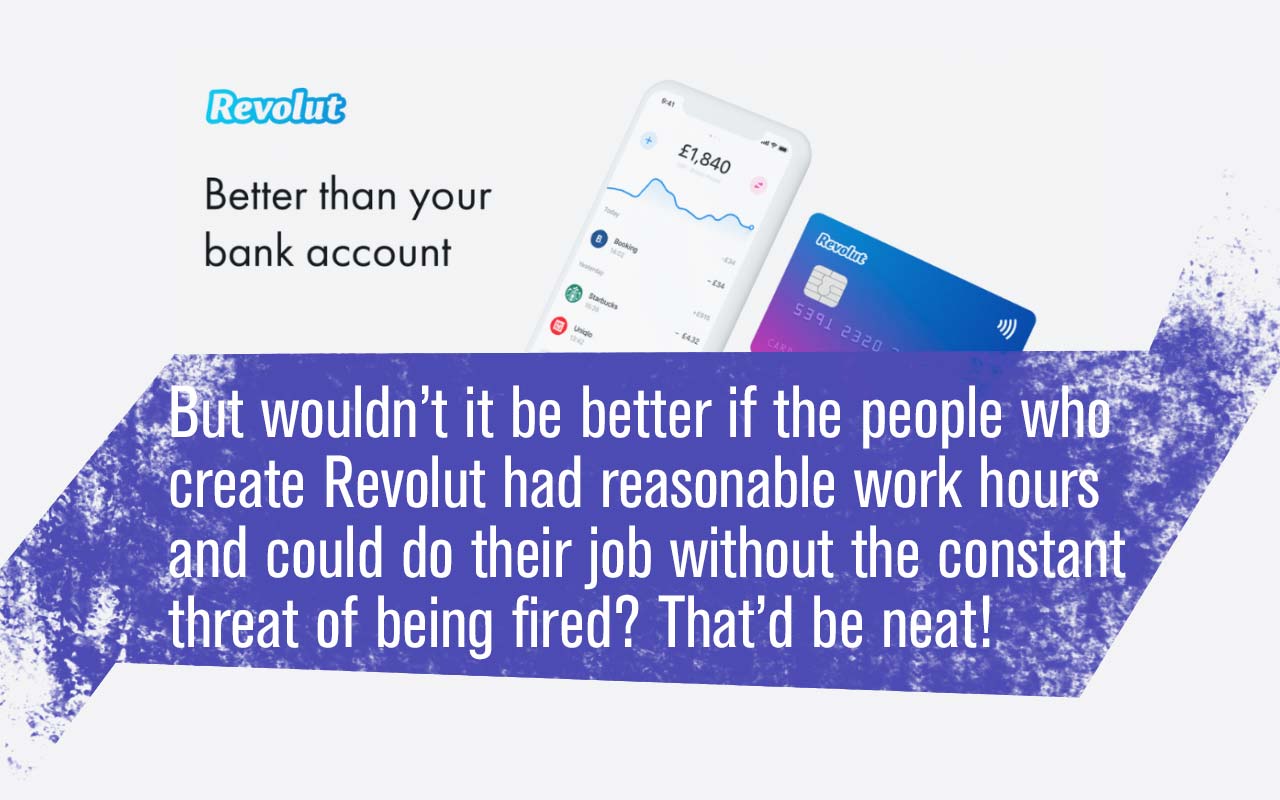 Also note that the person on the phone will “ask you some security questions” before they can close your account. Also note that, per a Revolut representative, “as a regulated financial institution we are obligated to keep data about our former users for 6 years.”

Again, Revolut is NOT the only app with this sort of abuse going on behind-the-scenes. We do not recommend dropping Revolut just to jump in and join any sort of competing app or service – this is not a call to drop one service and pick up another. If you or someone you know is part of or was once part of a group with similar abuses going on with workers (or consumers, for that matter), by all means, let us know! We’re here to report!