This morning astrophysicist Neil deGrasse Tyson took to Twitter to speak about Star Wars: The Force Awakens. He took time to pay extra attention to Han Solo’s claim of “making the Kessel Run in 12 parsecs.” Han Solo makes this claim all the way back in Star Wars: A New Hope, then repeats his claim in Star Wars: The Force Awakens as Rey suggests that he’s heard the ship has made this run in 14 parsecs. There’s a problem with that, suggests Tyson. We disagree.

NDT has beef with the way the Kessel Run is “timed.” He suggests on Twitter, “Unashamed of inanity, The Force Awakens repeats the Millennium Falcon boast of completing the Kessel Run in ‘under 12 parsecs’.” On the surface, this does not seem to make sense – running a race in “12 parsecs” seems to be like saying you’ve walked a mile in just two feet.

As NDT suggests, “A Parsec is an obscure unit of distance in Astrophysics, equal to 3.26 Light Years*. Neither has anything to do with time.”

*That’s about 19 trillion miles, or about 30.5 quadrillion meters, if you want to know.

The first and most prevalent argument for how Han Solo would have “made the Kessel Run” in 12 parsecs is this: black holes and gravity-strung slingshot effects.

Thanks to the book Star Wars: The Essential Atlas, we know that the Kessel Run’s collection of routes travels near a “cluster” of black holes – which is insane in and of itself, as any such cluster of black holes would be too strong even to edge around, much less use as a sort of intergalactic sling-shot. 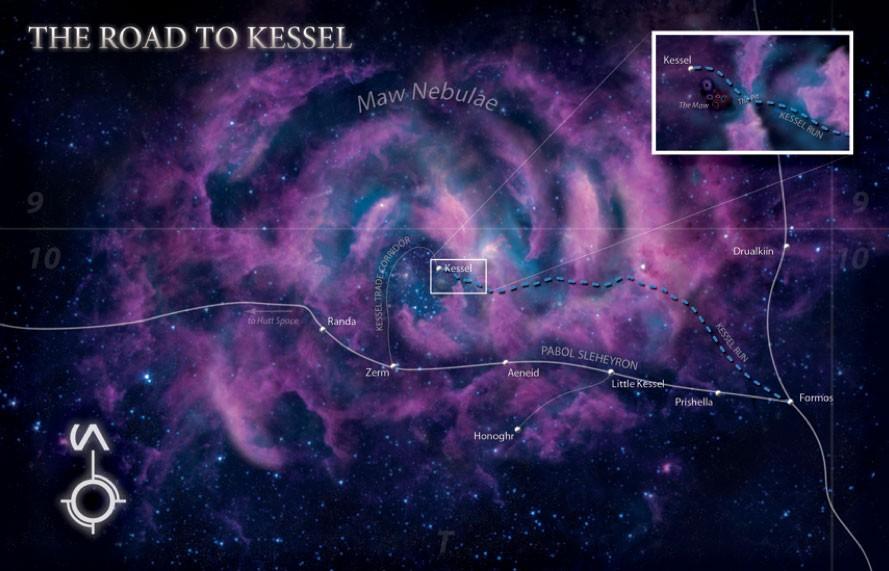 Despite this, over at Wired, back in February of 2013, Kyle Hill explained how it was possible that Han and Chewie used these black holes to cut down on the space they’d have had to have traveled.

At the same time, it’s suggested by Wired that Han and Chewie may then have traveled through time as well, making them far, far older than they seem.

This isn’t a normal race

The movies do not specify what the Kessel Run is, exactly. They don’t even really make clear whether or not the Kessel Run is a race. Or where it is – unless you suggest they imply that it’s near the “Spice Mines of Kessel”, which C-3PO mentions nearer the start of A New Hope. That’d make a lot of sense, since Han and Chewie are smugglers, after all.

The strongest argument for Solo comes from StarWars.com itself, back in February of 2002. This information comes from what the website at that time called “Ask the Lucasfilm Jedi Council,” and so was indeed part of canon at that time.

Whether or not Lucasfilm still considers it canon, we do not know:

“Han claims that the Falcon made the Kessel Run in less than 12 parsecs — but a parsec is a unit of distance, not time. What’s the deal?

While Captain Solo is known to make boastful claims that seem to defy the basic laws of space-time physics, in this particular case, an understanding of the mechanics of the Kessel Run illuminates this statistic.

The Kessel Run is a contest of speed and endurance for smugglers. Those who undertake it must deliver specified cargos (usually illicit in nature) to a series of divergently moving transport vessels. The smuggler must deliver the cargo before the transports wander out of the free trade lanes into restricted Imperial space.

Solo’s record is impressive, since the transport vessels covered less than 12 parsecs of distance during his hurried run between them, a testament to his piloting and the speed of the Millennium Falcon.”

You’ll also find mention of the Maw Cluster of black holes in this explanation from Madame Jocasta Nu, Jedi Librarian (via the “Ask the Lucasfilm Jedi Council” feature on StarWars.com back in 2002). 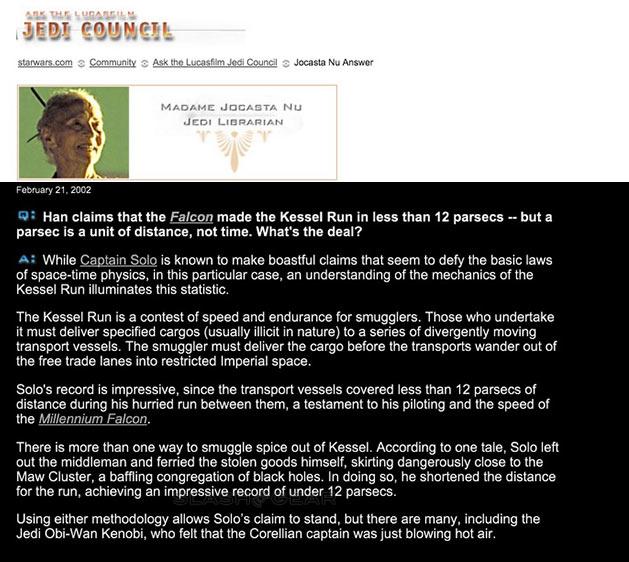 You can access this page archived at Archive.org. Thanks again, Internet Archive, your work is great!