Data Caps are coming, here’s what you need to know

Remember when you had to pay for the number of text messages that you were allowed to send and receive each month? It seemed pretty absurd at the time, especially when you consider just how little data is actually transmitted for each message. But the price wasn’t there to offset the cost of transmitting each text message. Instead it was used as a way for the phone companies to earn additional revenue while driving down the cost of their most basic plans.

These days, nearly every mobile phone plan comes with unlimited texting. This is because in the war between companies, everyone was eventually forced to offer texting as a basic feature, or risk driving customers to the competition. Well now we’re back in a very similar position with our ISPs, only this time they’re making us pay for data.

We all know that when you sign up for a plan with your local ISP, you need to pick out the speed of your connection. Depending on your location, and what companies are in your area, these speeds can vary greatly. AT&T, for instance, offers connections that are as slow as 768Kbs, and as fast as 1Gbps.

What a lot of people may not realize is that regardless of your plan or provider, nearly everyone is starting to enforce data caps. If you’re not familiar with data caps, they’re the amount of data that you’re allowed to transmit each month. The reason you may not recognize this is because it’s rarely a piece of information that’s given to you up-front.

Essentially, when you purchase internet service from a company, you’re paying for two different things. You normally just see one of these, which is the speed. As I said earlier, the speeds can vary greatly, depending on where you are. Whatever plan you pick, that’s the absolute fastest that you can download data on your connection. This metric is all about speed. How fast you can download a game, or how many HD movies you can stream over your connection. 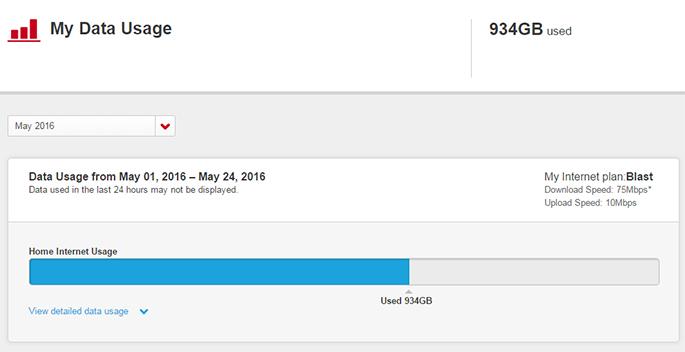 The other thing you’re paying for is the maximum amount of data that you’re able to transfer per month. Every byte of data that’s transferred to and from your modem is tracked by your ISP. Every game you download, every email you open, and every episode of your favorite show that you watch on Netflix. All of these count toward your data cap.

So what happens when you reach that cap? Most ISPs won’t cut you off, or even slow your connection. Instead, they’ll simply charge you a certain dollar amount for each GB of additional data that you use. And since you’ve already agreed to do this (it’ll be in the fine print of your agreement) you’ll just see the cost reflected on your next bill.

If you want to track the amount of data that you’ve used so far each month, it varies from provider to provider. For Comcast, I have to sign into my account, then go to my services, then click on my internet account. There it gives me a bar with a number that says just how much I’ve used.

Thankfully, Comcast hasn’t started enforcing any sort of data caps in my location yet, otherwise, I’d likely be paying a significant amount every month. According to their tool, I’m on track to use more than 1TB of data this month, which is significantly less than the data cap that they currently enforce elsewhere in the country. 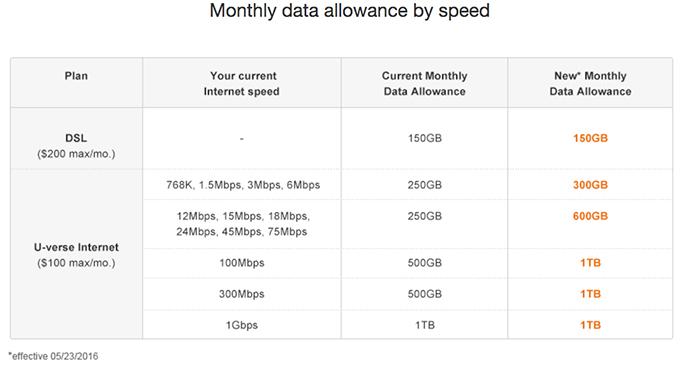 While some may look at these increased caps with joy, they’re actually a bit scary. Higher numbers might look good, but few of the major ISPs currently enforce their data caps. However, both Comcast and AT&T have raised them in the last month. This likely means that both companies are gearing up to start enforcing them. And that means a potentially larger bill each month.

You might be thinking that you don’t need to worry about this, as you aren’t some tech-savvy user that’s downloading stuff like a madman. But you really don’t have to. Maybe you have a family, and all of you enjoy streaming TV shows and movies. As companies like Netflix start offering higher quality content, the amount of data each video uses will continue to rise. So the same movies and shows you enjoy now may use up a larger portion of your monthly data, without warning.

Maybe you have kids with consoles. With digital downloads becoming more popular, and game sizes steadily increasing, it’s not that uncommon for a few game downloads to eat up a large portion of your limit for the month.

There is little you can do to stop the impending data caps that the companies will start enforcing. You can attempt to call into your company and complain, or even try contacting the FCC to file a complaint. And remember, when calling your ISP, unless they’re the only game in town, you can always threaten to leave for the competition, if they won’t offer you a solution to your data cap complaints.

Aside from these two things, the best thing that you can do is at least be aware of your data caps, and take preventative measures to prevent going over your limit and getting additional fees on your next bill. Find out how to check your current data usage, and if you’re getting close at the end of the month, crack down on excessive usage in your house.