DARPA wants a new unmanned aircraft that combined the best aspects of a helicopter with the best aspects of fixed wing aircraft. The program to create this new aircraft is called the VTOL X-Plane and DARPA has now announced that the project is moving into phase 2 design. The contact for this phase of the program was awarded to Aurora Flight Sciences.

“Just when we thought it had all been done before, the Aurora team found room for invention—truly new elements of engineering and technology that show enormous promise for demonstration on actual flight vehicles,” said Ashish Bagai, DARPA program manager. “This is an extremely novel approach,” Bagai said of the selected design. “It will be very challenging to demonstrate, but it has the potential to move the technology needle the farthest and provide some of the greatest spinoff opportunities for other vertical flight and aviation products.” 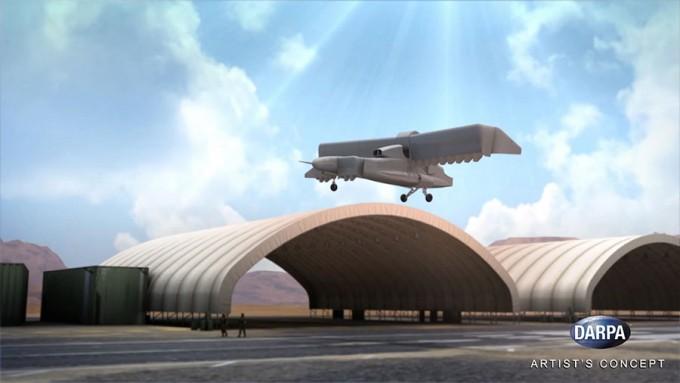 DARPA wants the VTOL X-plane to be capable of top speeds in the 300 to 400 knot range. The aircraft needs a hover efficiency of 60 to 75% and a favorable cruise lift-to-drag ratio of at least 10, a significant improvement from 5-6 currently. DARPA also wants the unmanned aircraft to carry a useful load of at least 40% of the vehicles projected gross weight of 10,000 to 12,000 pounds.

The aircraft is expected to use two large rear wings and a pair of smaller front canards near the nose of the aircraft. Power would come from a turboshaft engine of the sort used in the V-22 Osprey tilt rotor mounted in the fuselage making 4,000hp. The engine would power 24 ducted fans with nine in each wing and three inside each canard. The wings and canards would rotate to transition from forward flight to vertical.