Over-eye displays like that offered by Google Glass can serve many purposes — they facilitate navigation without having to take one’s eyes off the roads, for example, and allow data to be presented without pulling out a smartphone in the middle of a project. The military is one entity that can find ample uses for eye-mounted displays, and it is no stranger to such technology. Cost is a perennial problem, however, and so its mad scientist devision DARPA has come up with a budget-friendly Glass-like solution.

DARPA recently showed off a head up display at a demonstration in Virginia. Unlike some existing HUDs and over-eyes displays made specifically for the military, its new version — which was put together by a group of engineers — only cost a few hundred dollars each, making it a financially feasible device for military units. 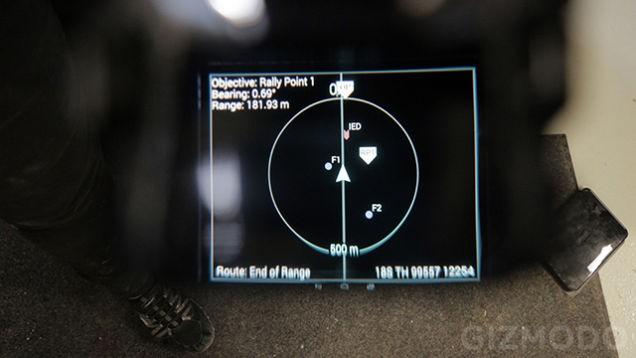 The displays are designed to be mounted on soldiers’ helmets, and they’re made specifically for infantry battalions, with the feature set zeroing in at navigation and threat-detection needs. It operates with TransApp, DARPA’s own ecosystem. Things like the soldier’s own position and the surrounding terrain are shown through the HUD.

You can see one fascinating demonstration of the software in the image above — noted on the navigation screen is a known IED, showing one way that such technology could save soldiers’ lives. Another feature is the ability to scroll through a database of images of civilians in any given region for investigating whether someone is a potential threat.