It would appear that the honor of being the lightest e-reader on the planet has been claimed by Bookeen and their new Cyberbook Odyssey HD FrontLight, complete with E-Ink HD display and the 6th generation since the start of the line. This device will be launched in November starting in Europe and the folks at Bookeen have made it clear that they’re coming for Amazon’s lunch, noting their power in a single sentence: “Since 1998, Bookeen has been the European champion in digital reading years before Amazon entered the market.”

Bookeen is making it clear that with this device they’ll be attacking the “independent” market as the only solution to do so “against Amazon or Kobo.” This device works with a 213 DPI resolution display and works with what Bookeen claims is 62% more pixels than “current e-readers” – though they do not specify which. This display has 758 x 1024 pixel across it, to be specific.

You’ve got a capacitive touch display up front working with that E-Ink and you’ll have twenty level of FrightLighting to adjust according to your needs. This device also has the ability to activate the FrontLight or de-activate it depending on if you’re in the dark, the light, or anywhere in-between. For reading documents, you’ve also got features here on this newest generation device that past generations simply were not capable of. 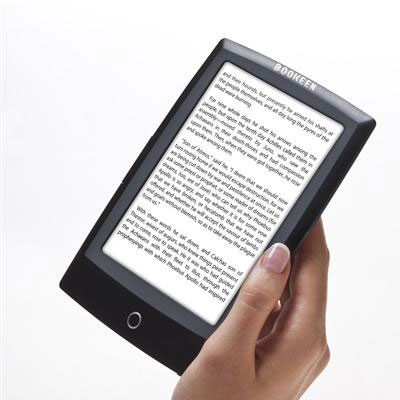 One of these options is PDF reflow – tap the button and your PDF’s text is re-adjusted without you needing to change the display in any way. You’ve got what Bookeen calls a High Speed Ink System as well for “action at a fast pace.” This device will be coming out in more than 40 countries, weighs in at 180 g/6.35 oz, and boasts both touch-screen management and mechanical buttons.

You’ll be able to pick this device up in Old Pink, Black, Red Vermillion, and several more case colors. It’ll also be joined in its release later this year by a Cybook Odyssey 2013 Edition – a new version of the company’s best-seller. Prices and further specifications will be revealed soon – stay tuned!