Your dreams of an oversized wrist-mounted computer are one step closer to reality this week, as Universal Display Corp and LG Display demonstrate their curved OLED panel at the SID expo.  A 4-inch display running at QVGA resolution, UDC and LG expect the OLED – which requires just 1W of power – to be worn like a watch, hence the rather intimidating rubber cuff.

What exactly it might do – aside from show photos of luscious greenery – is obviously left up to manufacturers adopting the curved panel.  A 320 x 240 resolution display capable of 1.67m colors and 100ppi seems somewhat wasted on telling the time and being used as a wearable digital photo frame, but who are we to judge.

Brightness is 100 cd/m2 and contrast is 1,000:1; the panel itself is 0.3mm thick, with a steel substrate to protect it.  Despite that, it only weighs 8g, and can be bent to a curvature radius of up to two inches.  No word on when it might go into production. 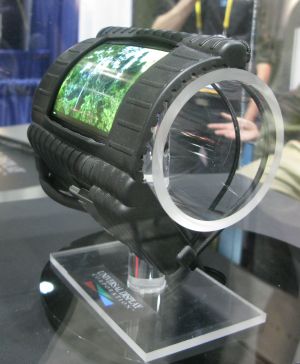