NASA‘s Curiosity rover continues its exploration of Mars and the unfurling of its complex scientific equipment and robotic limbs, with new photos beamed back of the sensor-encrusted tech in action. This photo, and the second version including more of the Martian landscape after the cut, shows Curiosity’s Mastcam – or one of the “eyes,” at least – deployed, as the rover begins a 6-10 day test of the 7-foot limb. Meanwhile, Curiosity’s football-pitch-long trundling so far has been caught on camera by an orbiter above Mars. 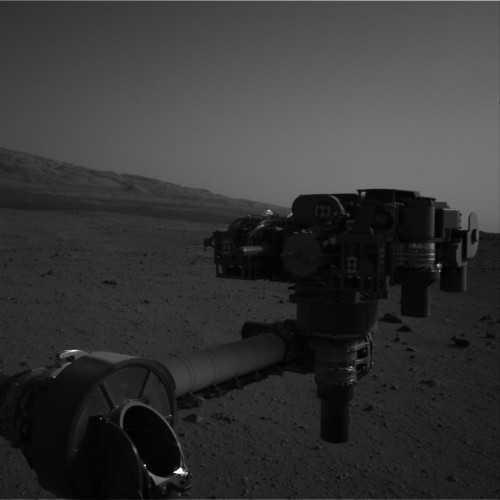 The High-Resolution Imaging Science Experiment (HiRISE) camera on NASA’s Mars Reconnaissance Orbiter snapped a color shot of Curiosity’s route so far, shown below, with the rover’s tire tracks clearly visible through the Martian dust. What you can’t see from that distance is the fact that the tires themselves have been leaving Morse code messages along the way. 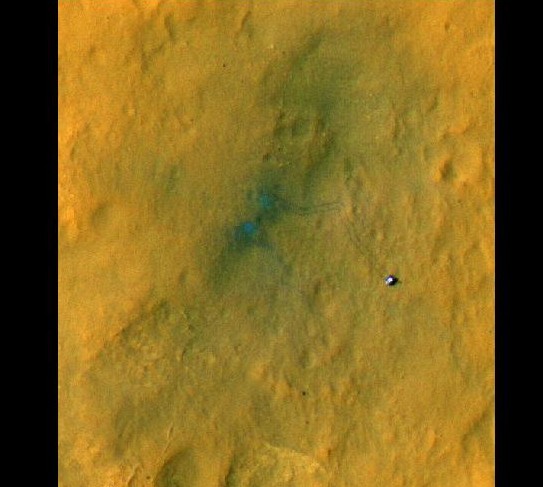 Although Curiosity was tested no small amount when on Earth, these lengthy trials now that the rover has made it to Mars are essential, NASA says, for its safe use on the new planet. “These activities are important to get a better understanding for how the arm functions after the long cruise to Mars and in the different temperature and gravity of Mars, compared to earlier testing on Earth” Daniel Limonadi,  lead systems engineer for Curiosity’s surface sampling and science system at NASA’s Jet Propulsion Laboratory said of the tests.

“We will be putting the arm through a range of motions and placing it at important ‘teach points’ that were established during Earth testing,” Limonadi explained, “such as the positions for putting sample material into the inlet ports for analytical instruments.”

Once the tests are completed, Curiosity will begin a several week long journey to Glenelg, the location the JPL team has identified as likely to give good results in dust sampling. The rover will use its drill and onboard analysis equipment to gather rock samples and assess their composition.