Perhaps it’s a 2009 thing and, come the new year, packaging will won’t enthral us so, but for now there’s a great deal of geeky appeal in how manufacturers choose to present their tech.  Cowon have generally been associated more with audio performance than they have with style, but it looks like some of the “shape up” message is getting through: DAP Review have just taken delivery of the iAudio 9 PMP, and as their unboxing photoset shows there’s obviously been a lot of thought put into how it’s packaged.

The plastic shell does look a little like a big-gulp drinks container up-ended, but inside there’s a reasonably slim PMP with touch-sensitive controls, some headphones with an anti-tangle cord, and – quite a surprise these days – a mini CD with drivers and software.  Considering most companies point you in the direction of their website for apps to go with your new media player, we’re giving Cowon a little credit here.

As to whether this is all a case of style over substance, ask yourself whether you’d have reached for a Cowon player in their previous, ugly bare-box or vacuum-packed containers, or if you’d have gone for the glistening iPods next to them in-store.  Unboxing a well-designed device not only sets the scene for a clean usage experience, it also helps banish a little of that “new gadget guilt” where you wonder whether you really were justified in splashing out on the plastic.  Anything that minimizes that, we’re happy with! 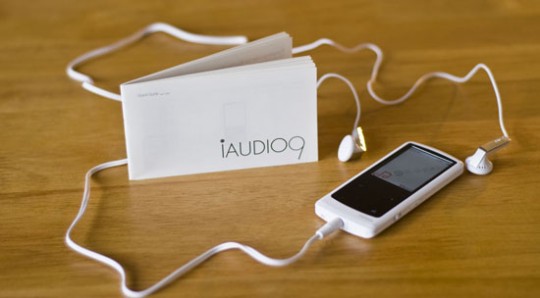