Conflict Materials in my smartphone? Hope for Congo says yes

It’s a risky business you enter in when you purchase a product, and not just when you’re rolling with NIKE with their child labor-made shoes or that lovely diamond you’ve got around your neck mined by an enslaved people in Africa – what we’re now to understand is that its possible, though not confirmed, that the vast majority of the top-name manufacturers your gadgets come from are involved in, in one way or another, the “conflict materials” trade. You may know this term from the movie Blood Diamond, released a few years ago starring Leonardo Dicaprio and Djimon Hounsou, or Kanye West’s song “Diamonds” from right around the same time as the release of that movie – the absolutely evil conditions you saw or heard in those bits of media are very likely continuing through to the bits that make up your favorite MP3 player, speakers, and tablets you’re using right this second.

What several sources including the Enough Project’s Raise Hope for Congo campaign, actress and activist Robin Wright, and the folks who made the documentary Blood in the Mobile tell us that essentially what you’ve got in your smartphone is a bunch of materials mined by Congolese miners, men, women, and children, whose suffering allows you to make calls, texts, and updates to your favorite social network on the daily. 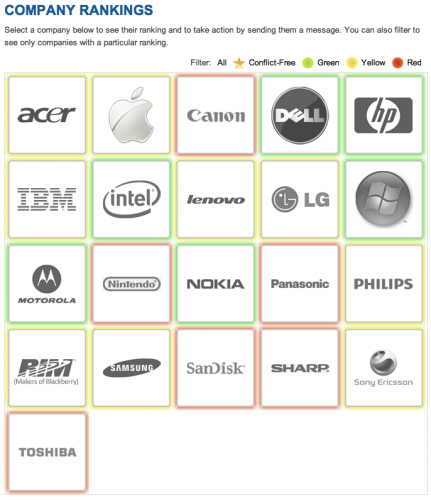 What you see above is a heat map made by Raise Hope for Congo that shows exactly which companies have showed progression towards a conflict-free set of materials for their product lines – and which companies have shown no such effort in the least. The most telling marker here isn’t the green for good, the yellow for OK, or the red for terrible, it’s the gold star for Conflict-Free. You’ll notice that no company has this star. Through the site where this heatmap originates, you can contact each company and demand that they improve their standing.

You can also contact the business that makes the devices you love directly or use a form set up by Faith-based “socially responsible investment fund” Praxis Mutual Funds to contact your favorite carrier and demand that they provide guaranteed conflict-free cellphone options. Meanwhile we’ll be doing some prodding of our own on this investigation – and lets see if we can give it as much attention as we’ve given the invasion of our precious privacy that Carrier IQ has been accused of making happen. Does blood outweigh keystroke logging to you?