The latest US smartphone subscriber numbers are in and ComScore has gathered the data for all to compare. According to their survey of more than 30,000 US mobile subscribers from March to June, Google’s Android platform continues to dominate, now hitting a 40.1 percent share.

With Google’s Android in the top spot, Apple’s iOS comes in second followed by RIM’s BlackBerry, Microsoft’s Windows Phone, and Nokia’s Symbian. Android not only dominated in market share, but also saw a much higher growth rate with a point change of 5.4.

Apple also grew from March to June, but not by much. And looking at ComScore’s report from last period, we see that Apple’s May and June subscriber shares remained the same, while Android had a 2-point growth.

The mobile platforms from RIM, Microsoft, and Nokia all saw a decrease in subscriber share, with the BlackBerry dropping the most. Like Apple, Microsoft’s subscriber share in June remains unchanged from May. Additionally, ComScore reported on the top mobile OEMs, with Samsung remaining on top, followed in order by LG, Motorola, Apple, and RIM. 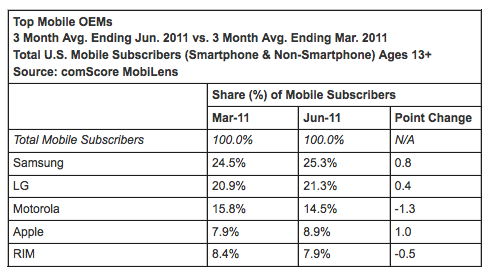