A new report was released today by comScore that compared the U.S. mobile phone market share differences between the last three-month period ending May 2011 and the previous ending February 2011. The study was based on a survey of over 30,000 U.S. mobile subscribers and revealed that Android continued to dominate but that Apple’s iPhone numbers also continued to grow.

When it comes to smartphone platforms, Google’s Android rules the roost with 38.1% market share with Apple coming in second with 26.6% share. RIM at 24.7%, Microsoft at 5.8%, and Palm at 2.4% rounds out the rest of the platform leaders. Out of the leading five, Android experienced a point change of 5.1%, Apple had 1.4%, and the rest all lost market share.

Comparing U.S. mobile phone manufacturers, leading the pack is Samsung, LG, Motorola, Apple, and RIM—in that order. However, Apple is the only phone maker to experience a point change of greater than 1% while Motorola and RIM shares both dropped slightly. 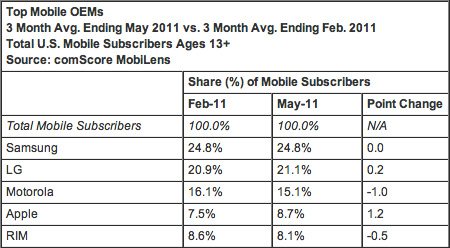 Overall, it appears that Android’s popularity hasn’t affected Apple’s growth as much as it has on other competing platforms. Verizon’s iPhone 4 also helped Apple maintain its numbers, which suggests that the imminent iPhone 4S and iPhone 5 should boost numbers some more. The next-gen iPhone is believed to work for the two remaining large U.S. carriers yet to have the coveted handset.