ComScore: Android still on top, Apple gets a boost

Market research firm comScore has released its November 2011 report on US mobile subscribers, revealing unsurprisingly that Android continues to take the lead in smartphone platforms while Samsung is still on top in smartphone manufacturer market share. However, Apple saw increasing growth while the others plateaued likely due to a boost from its iPhone 4S sales.

The comScore study surveyed 30,000 US mobile subscribers and looked at the three-month average period ending in November. When it comes to the top five smartphone OEMs, Samsung maintains first place at 25.6 percent, a 0.3 point change, while Apple comes in fourth at 11.2 percent, a more dramatic 1.4 point change. In second and third is LG and Motorola at 20.5 percent and 13.7 percent, each seeing a drop of -0.5 and -0.3 point changes. 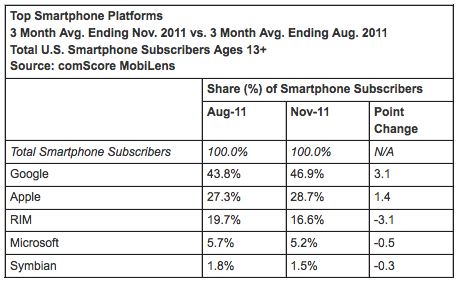